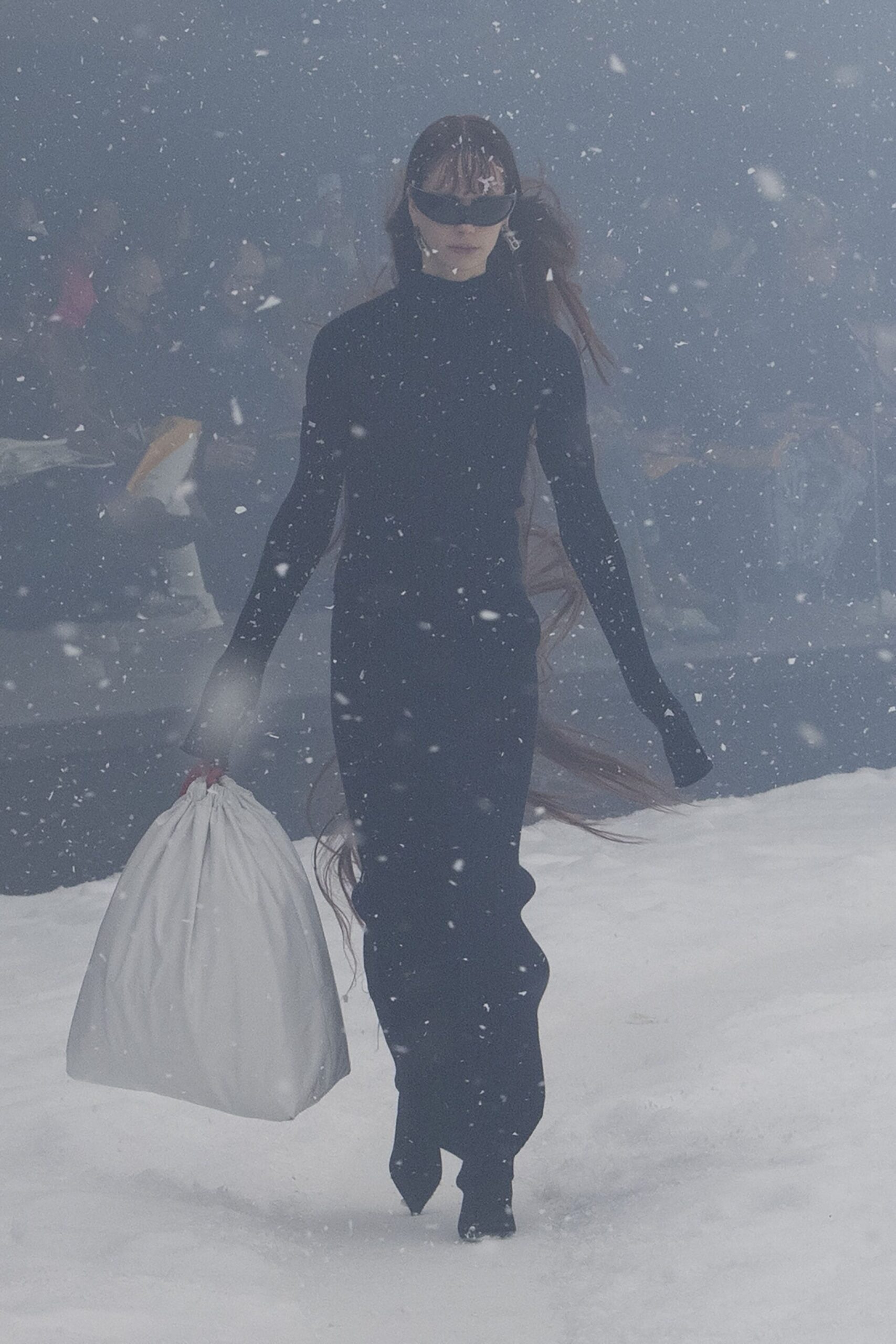 Demna is always one to bring together polar peripheries – the fusion of high and low, niche and mass, beauty and dystopia, and most recently luxury and trauma. With Fashion Month spanning out across the past several weeks, it couldn’t have felt any more mistimed as Russia launched its attack on Ukraine. At a time when the news and online sphere is being bombarded with horrific images, the continuation of lavish runway displays and hedonistic after parties felt somewhat awkward and frivolous. Yet brands like Balenciaga, with creative director Demna at the helm, chose to redirect their storytelling in solidarity with Ukraine. It was clear in his Winter 2022 unveiling that the clothing served secondary to the primary underpinning of the show: the human condition. 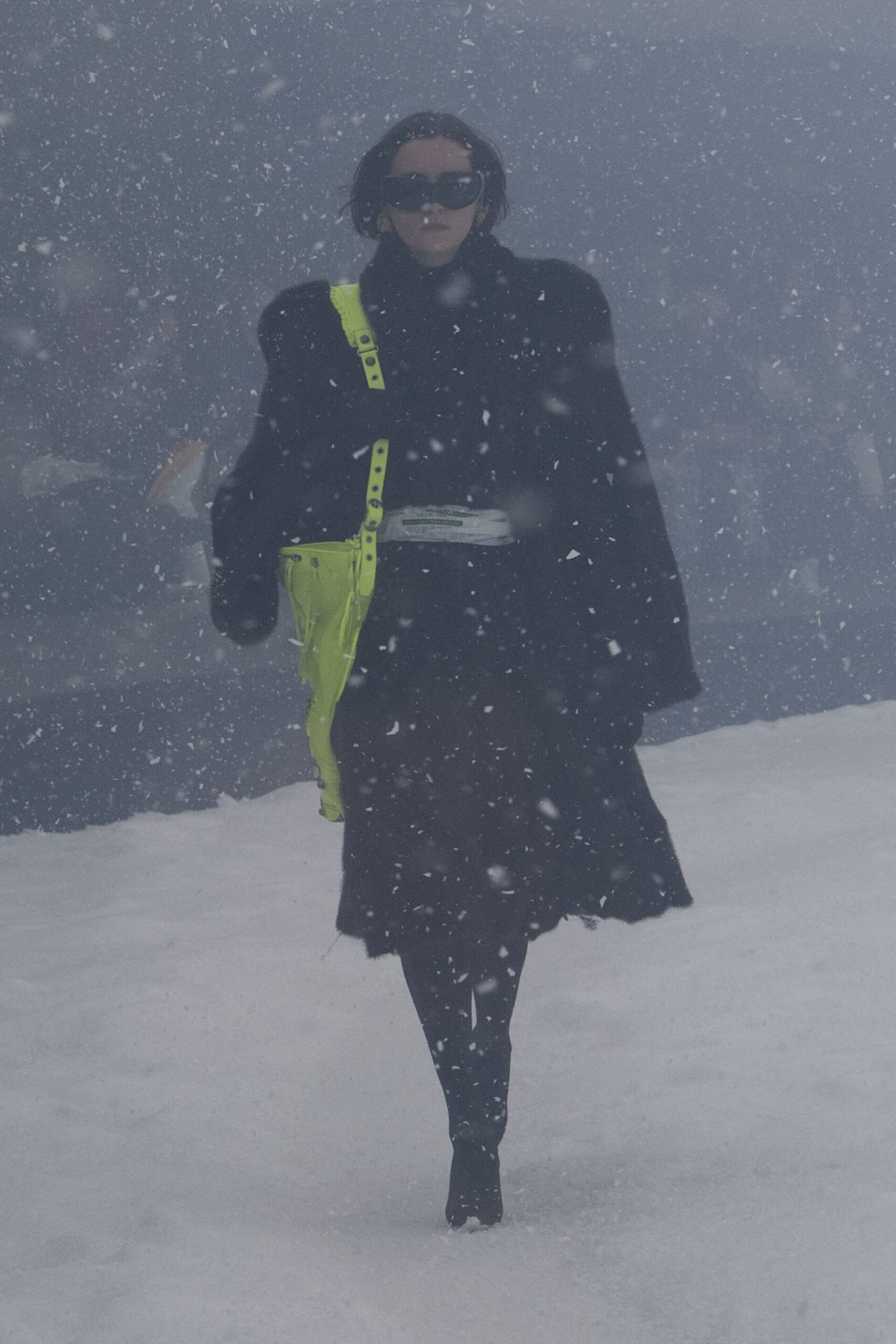 For one to truly grasp the significance of the latest Balenciaga show, one must understand Demna’s background and history. The Balenciaga Winter 2022 show was a deep dive back into the designer’s personal past as the warfare and turmoil he witnessed in his Georgian upbringing plays out to repeat itself today. Born in Sukhumi, a Georgian city of the Abkhazia region that saw heavy fighting and brutality during the Georgian Civil War of 1991-1993, Demna and his family fled when he was 12-years old. They were amongst tens of thousands who ran away from their reality only to face a new plight: merciless voyage conditions and subsequent displacement.

“The war in Ukraine has triggered the pain of a past trauma I have carried in me since 1993 when the same thing happened in my home country and I became a forever refugee,” reveals Demna in the show notes. “Forever,” he reinforces is “something that stays in you. The fear, the desperation, the realization that no one wants you.” 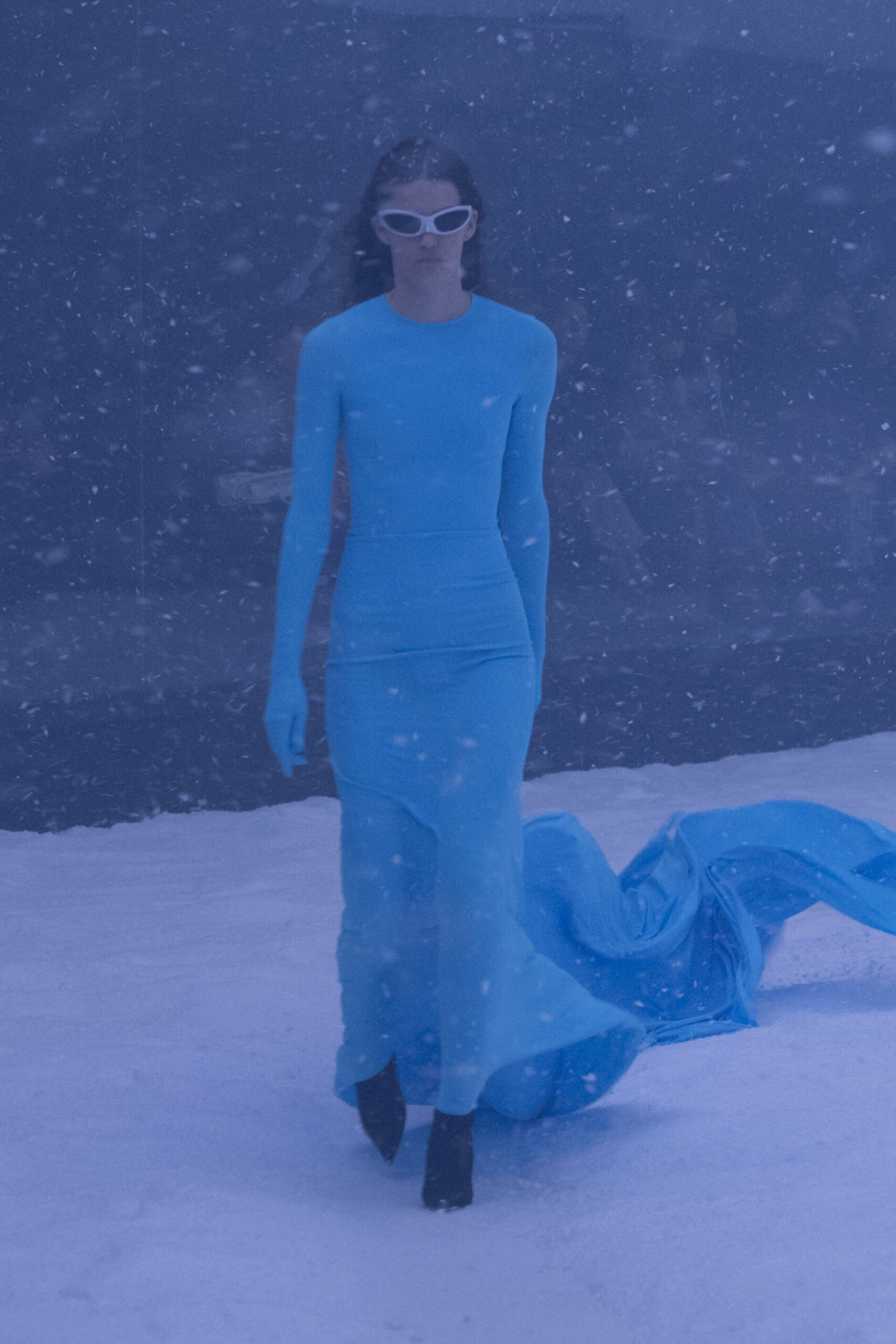 Whilst the futile hashtag attempts of many brands and public figures to express their support for Ukraine are quick to fall under the category of virtue signaling, Demna’s efforts come from a place of authenticity and solidarity through his shared experience. At the end of the day, Demna himself has experienced life as a displaced refugee, fleeing a war-torn post-Soviet nation. He has experienced and witnessed what so few of us in the West have.

In the period building up to the show it was incredibly hard for him to see the relevance of what he was doing in the studio. In the show notes he further explains that. 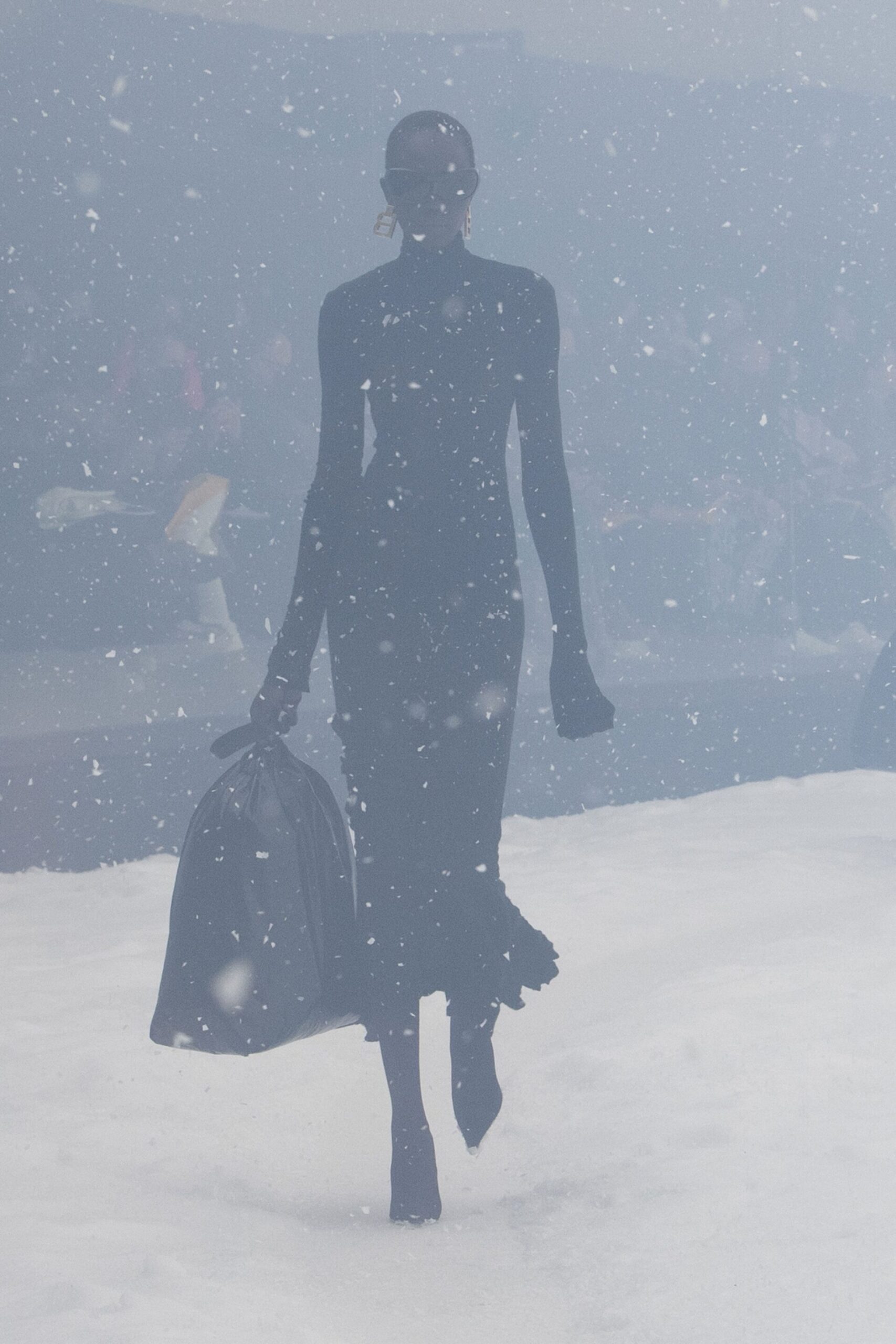 “Fashion Week feels like some kind of an absurdity.” He poignantly states, “I thought for a moment about cancelling the show that I and my team worked hard on and were all looking forward to. But then I realized that cancelling this show would mean giving in, surrendering to the evil that has already hurt me so much for almost 30 years. I decided that I can no longer sacrifice parts of me to that senseless, heartless war of ego.”

Show notes on each seat at the Balenciaga Winter 2022 show

What we have continuously witnessed across Demna’s seven years at Balenciaga is his fearless approach to using his work as a vehicle for political and social commentary. His shows are an invitation to think, question and explore what’s going on in the world. Originally planned six months ago, the original objective of Winter 2022 was to convey a message about climate change. Inside the aircraft hangar at the private jet airport in which the show took place, was to be an imagined future where snow ceases to exist and is ‘experienced’ only through virtual reality. It seemed especially fitting with the recent Winter Olympic Games requiring copious amounts of snow to be produced artificially at a huge monetary and environmental cost. Yet instead of predicting a reality in the near or distant future, the most recent Balenciaga show hit different. It reflected the actuality of the now. Context proved critical once again as the show’s original concept transformed into a momentous social commentary given the current situation. 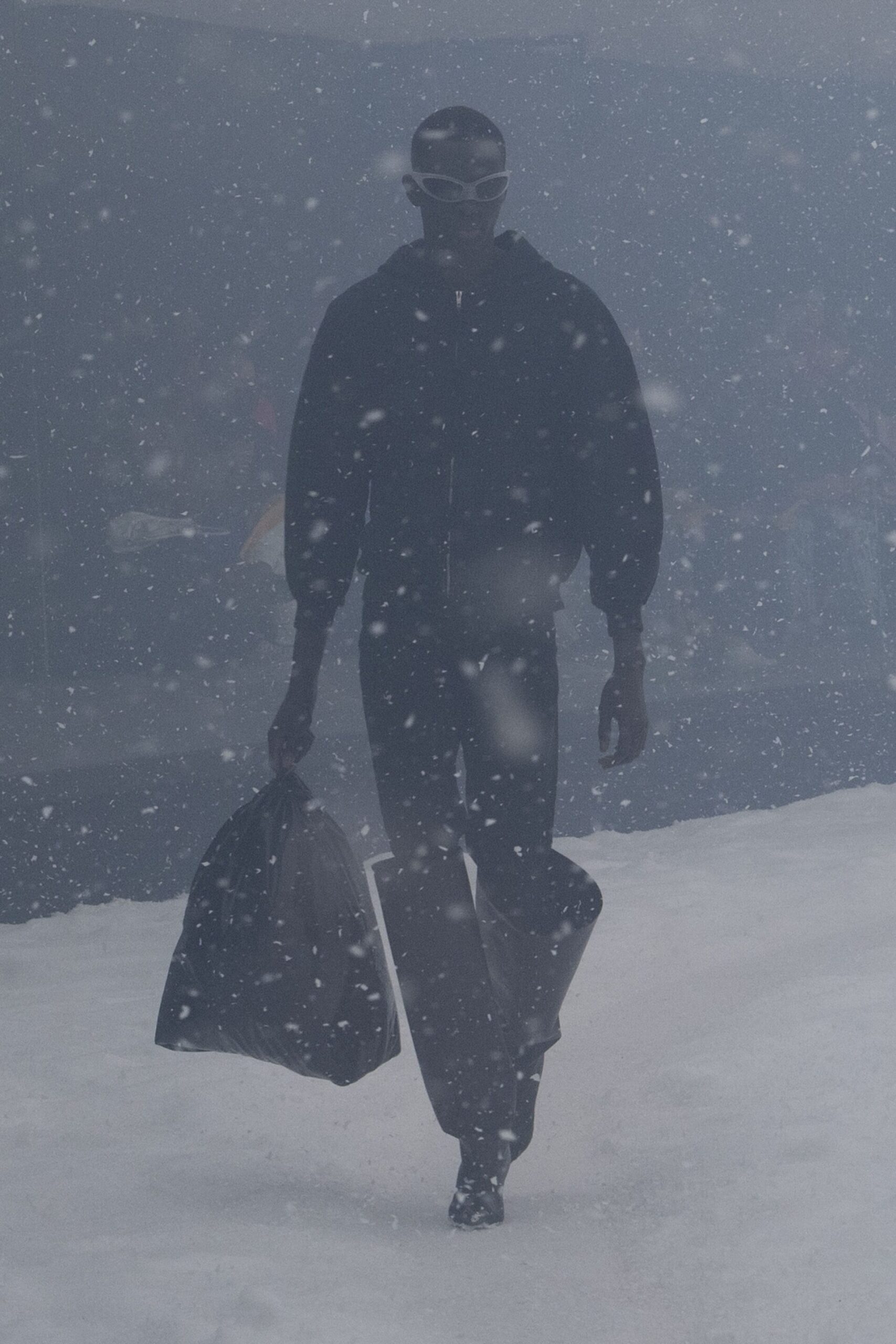 The show opened with a touching moment. A poem written by prominent Ukrainian poet Oleksandr Oles about strength was read out loud by Demna in Ukrainian. No translation was provided as it was intended only to be heard and understood by those who needed to hear it. Through a dome-shaped glass resembling a snow globe, audience members bore witness to a striking scene. Models trudged in a circuit through snow headfirst into blasting winds and, symbolically, whatever future lay ahead of them. Clad in knee-high boots, stilettos, and floundering fabrics, as uncomfortable it was to watch, it looked incredibly uncomfortable for them to walk. With French Pianist David Kadouch’s rendition of ‘Slavonic Dances’ playing angelically in the back, it is easy to see why the show stirred up a melting pot of emotions. The poetic contrast of the beautiful clothes and music to insufferable weather conditions painted a powerful image. A third of the way in, the soundscape transitioned into the angry electronic thumpings of BFRND. This is arguably when the true disturbing nature of the scene began to expose itself as the models morphed into migrants. It may have been a farfetched scene for some spectators, but it simply reflected the painstaking reality for displaced peoples all over the world. It’s easy to share and retweet a post showing support for a war, but harder to watch the reality when it’s packaged in such a way. 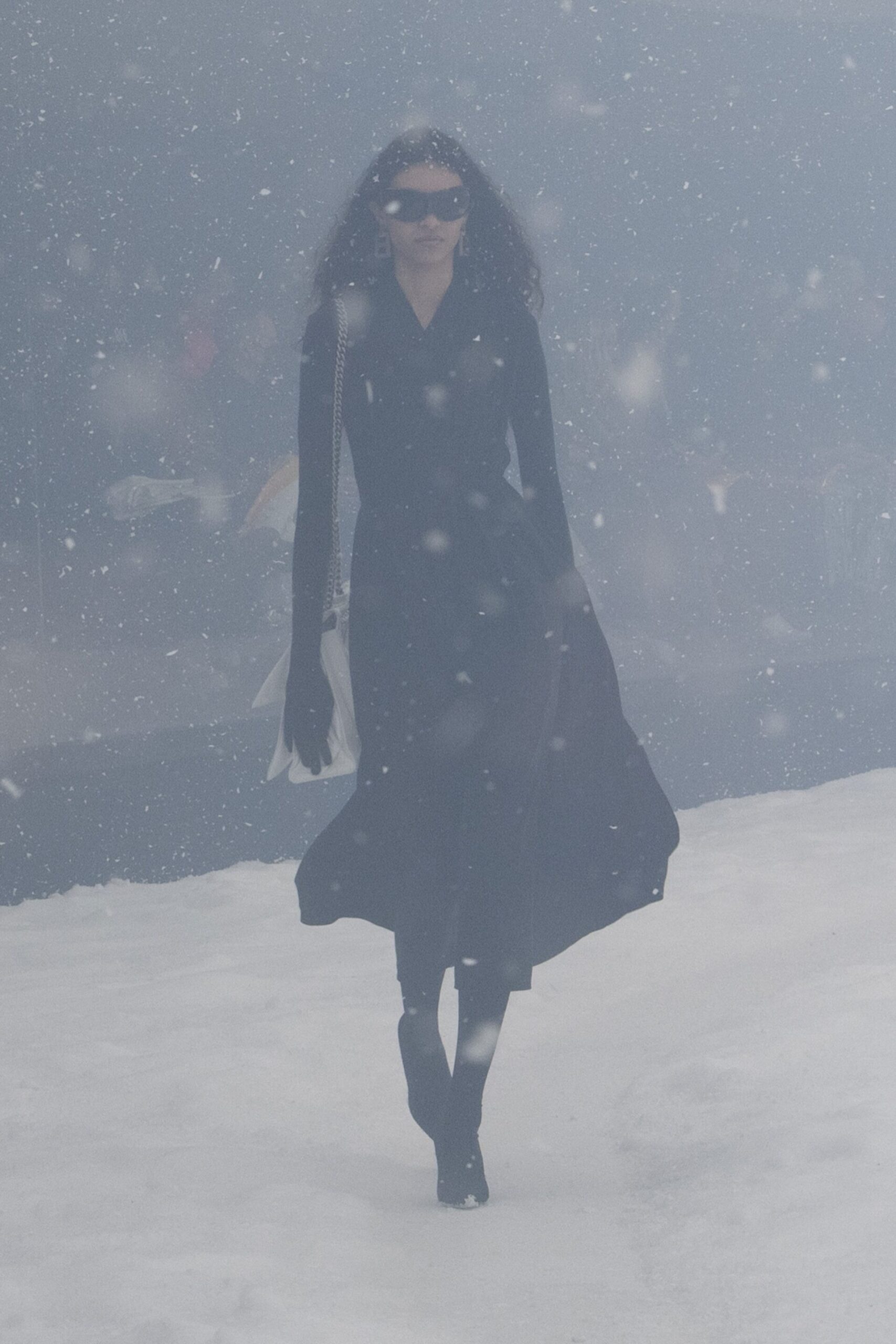 Every element of the presentation seemed to have its purpose and symbolic placement. From the cracked iPhone 6 invitations to the Ukrainian flag T-shirts placed on each audience member’s seat. Similarly, the highly talked about leather garbage bags, the Trash Pouch, is hard to overlook. It invites a plethora of interpretations: a comment on consumption and throwaway culture or even an ironic swipe at the fashion industry. Fashion critic Rachel Tashjian interprets it as “a playful tweak at how wealthy people will commodify practically anything.”

It is easy to witness and sympathize with those displaced as we consume filtered images through our smartphones but we mustn’t forget that we are in positions of privilege and safety. We have a roof over our head; we are consuming fashion when others don’t even have their basic needs met. At its root definition, luxury is any comfort or deviation from your quotidian norms. For many right now across the globe luxury is having a home, food, medical access and safety.

Intertwining his creative vision with allegories, Demna has become a master of utilizing fashion and digital communication to achieve something deeper. To anyone watching the show that has ever experienced displacement, the visuals would have no doubt resurfaced some tinge of trauma. If this had been done by any other fashion house it would have been appalling, but with Demna and Balenciaga it just made sense. As one of his most touching presentations to date, it goes on to solidify his fort sensibility in pushing forth conversations that need to be spoken. Despite the grit and hardship elucidated by last week’s unravelling, audiences are left thinking and questioning the world we inhabit and the seemingly futile ‘avenir’ we drift towards. It’s in these moments of discomfort that we question our being. 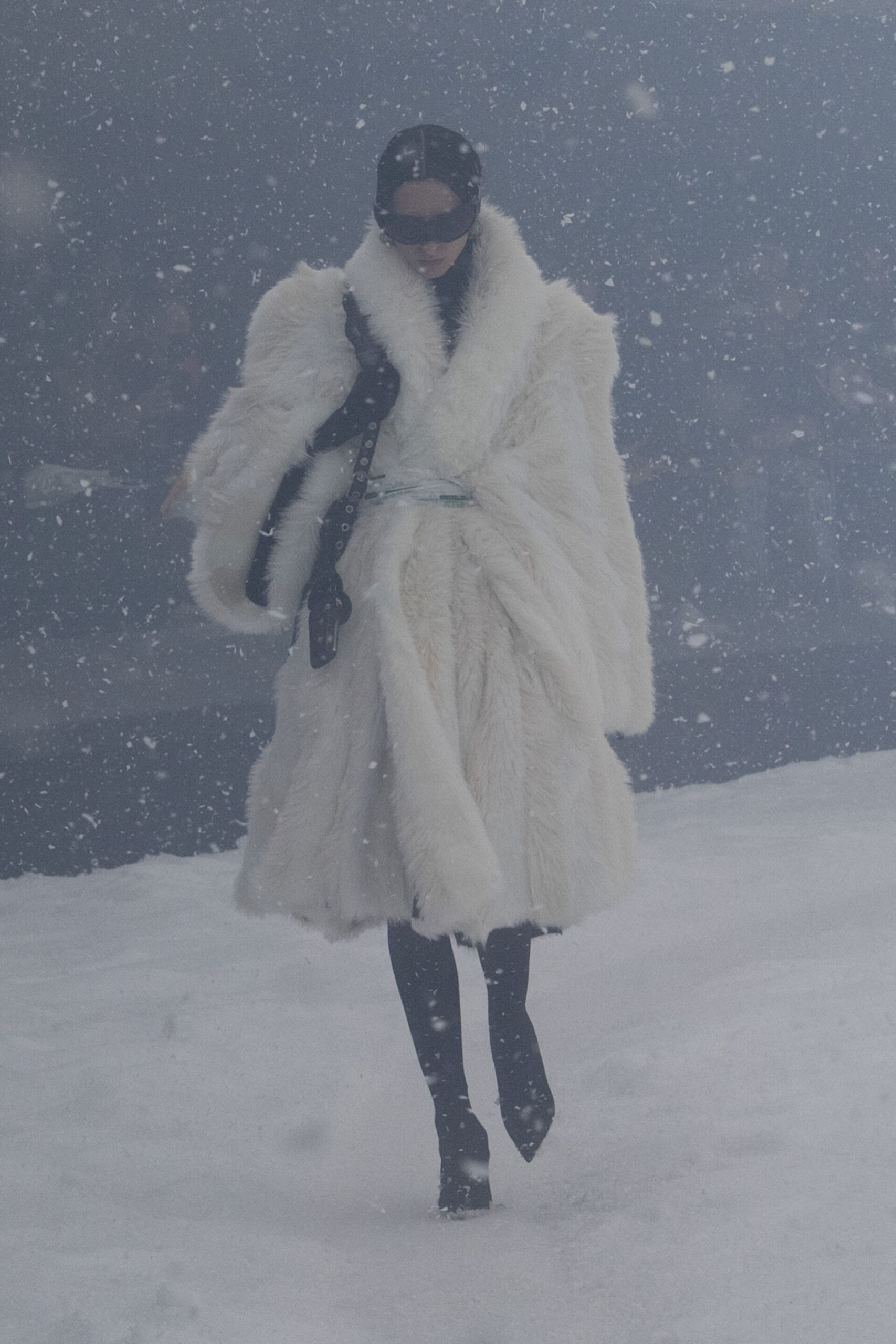