After almost two seasons of cancelled in-person shows (and an exhaustive array of online stand-ins) “real life” New York Fashion Week, sans social distancing, made a defiant return last week. It came with the reframing and redirecting of the industry into a “brave new world”, with a palpably fresh sense of purpose and responsibility for the new era we are all ploughing headfirst into.

Our favourite shows of the Spring Summer 2022 season came from designers who married the crippling weight of the last eighteen months, with a much-needed dose of optimism and confidence in their designs. 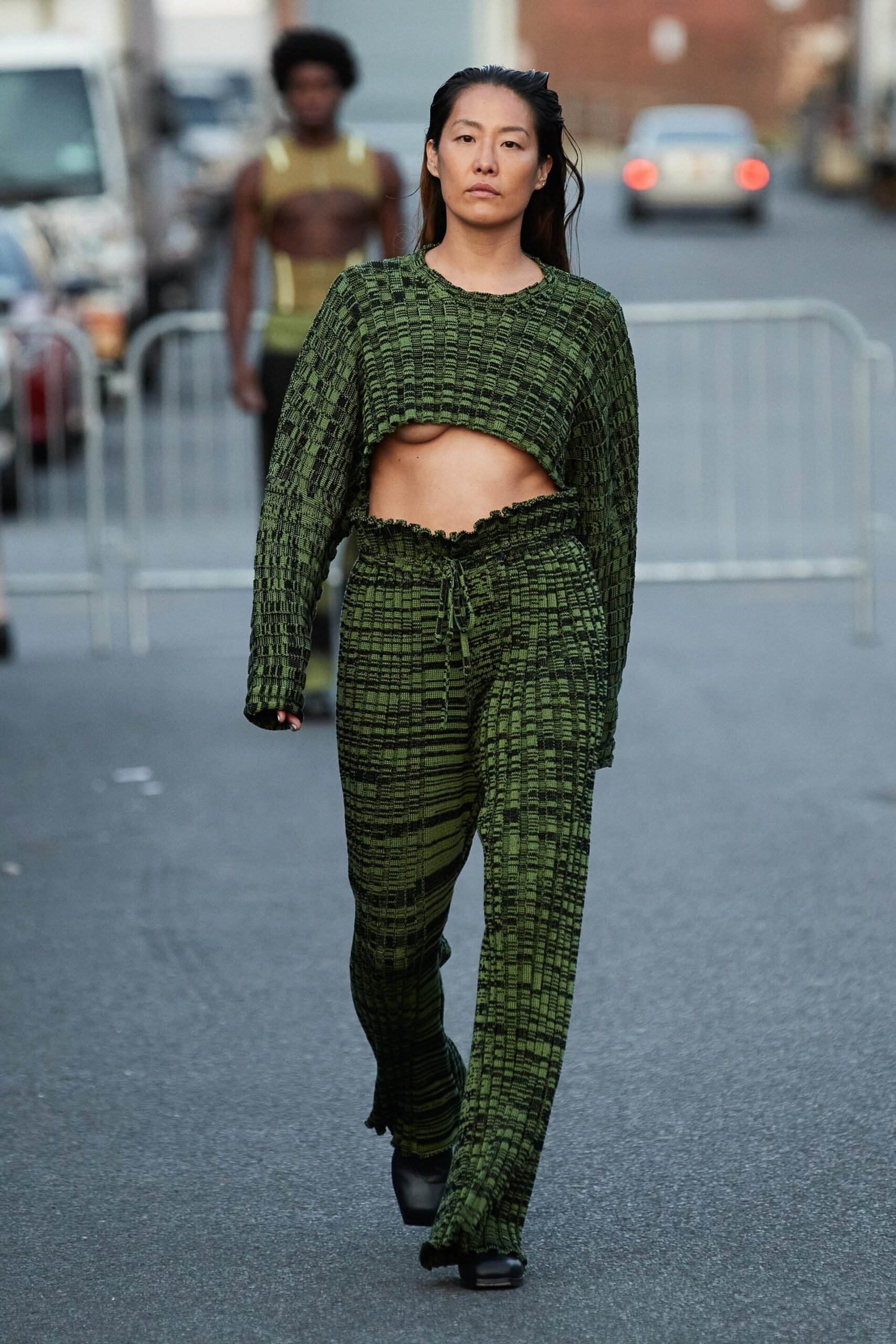 Eckhaus Latta was most prominent in this sensual, yet practical balance. The bi-coastal label is a quasi-religious, cult-status legacy, that exhibited their new airier, sexier collection, most notably on a side street in Brooklyn. The crowd huddled tightly around the front row on fold-up chairs.

The concept of collectivism and reconnection with the streets, the city and its people created fluidity between its designs and acted as a mirror to the pent-up sexuality of young people en masse. Breasts, butts and hips – all purposefully exposed. Black thongs gave the finger to industry-standard beige. 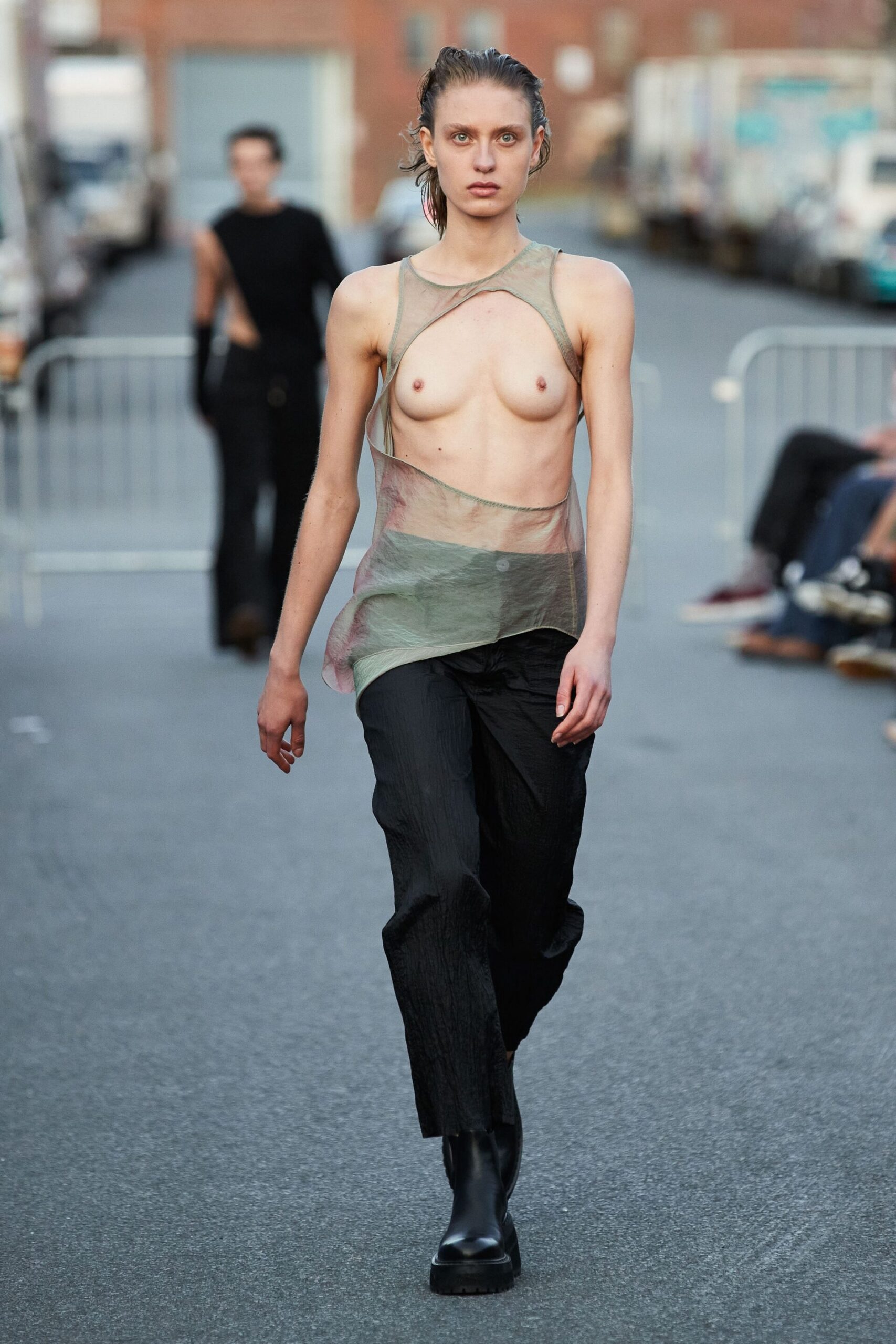 Matching sets, chunky knits, trenches, loafers and sporty sandals nodded to the design duo’s partial investment in comfort that garnered such a loyal following. However, the collection was indisputably sleek.

Sensual cut-outs, bared bodies and pops of bright greens, oranges and pinks, declared that while things may be getting more serious for the duo, they still know how to simmer in the delicacies of light-heartedness. Despite the increased sophistication of this collection, Mike Eckhaus and Zoe Latta know the power of retaining youthful vibrancy in their work. A dedication to this playfulness is the secret to dressing and inspiring the post-lockdown crowds. 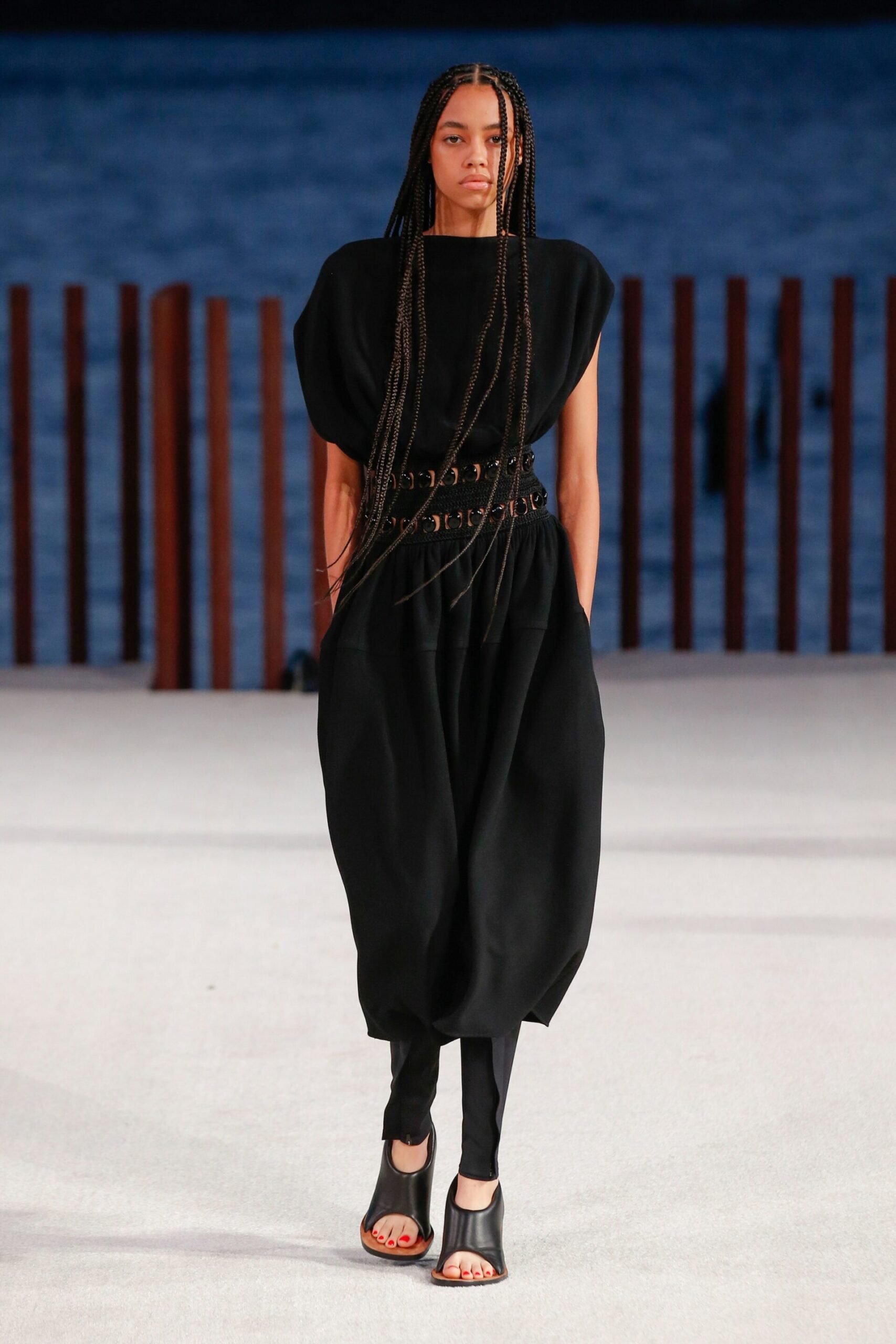 Another standout show that expertly walked the tightrope between the uneasy air of a pandemic and a half-free, new world was Proenza Schouler. Its mix of sexy exhibitionism and restraint created an understanding and apt assessment of the times. It was a historical moment for bare knees at Proenza Schouler, an olive branch to a target demographic emerging hungry from confinement.

This collection seemed constructed for the liminal space frequented by its onlookers. Commonly ricocheting between knitted tanks, jackets-come-cardigans and cinched waists paired with a new mini-skirt length.

Jack McCollough and Lazaro Hernandez returned to in-person fashion shows with a backdrop of the Hudson River at sunset, framing their utilitarian collection against the dramatic and metaphorical backdrop of a sky changing unrecognisably. 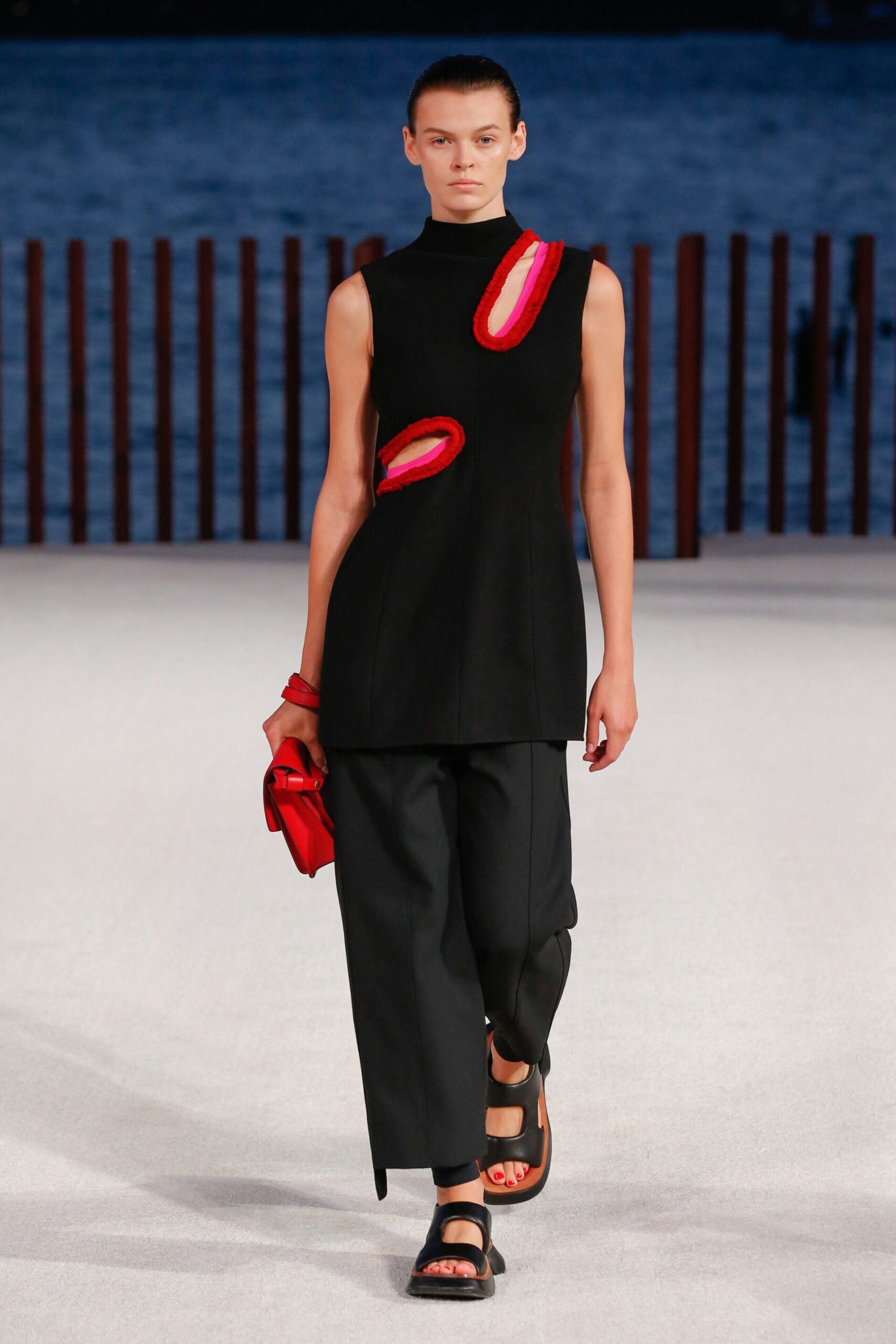 The gentleness of dusk highlighted the fragility and duality of the collection – a parade of uniforms for the tentative new freedom we can expect in the spring from the unshakeable, mainstay fashion house. The silhouettes were simple, with tank-top dresses fitted to the A-line in a casual approach.

Furthermore, Proenza Schouler did what many have been reluctant to do amid continued uncertainty. It unabashedly celebrated the optimism for all that lies ahead in their show notes, with the collection also doubling up as an ideal, holiday wardrobe in optimistic tones of red, mustard, and blue. The collection was also accompanied by leather handbags and handmade feather leis made in collaboration with the Maui-based creator, Patti Hanna. 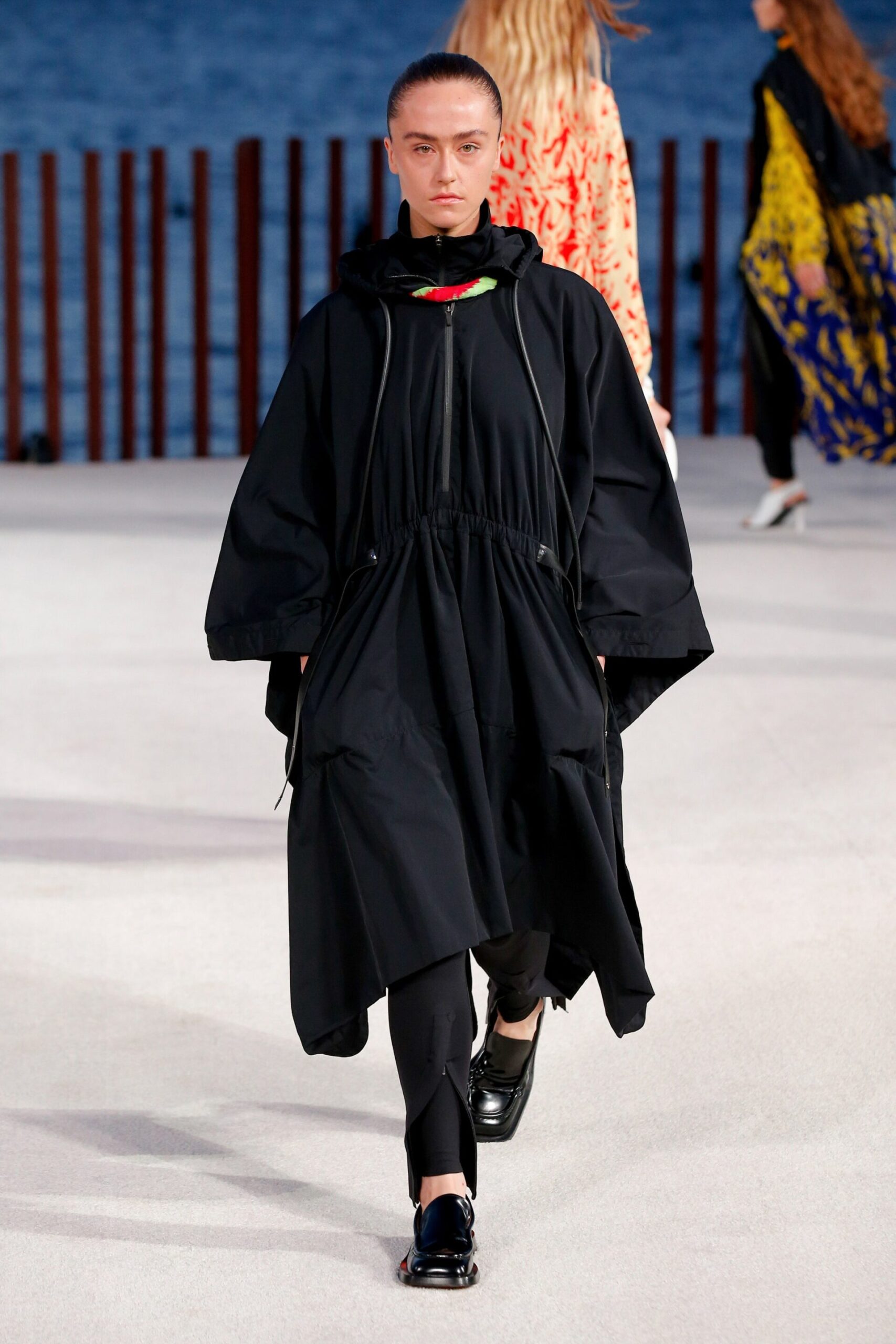 Naturally, this was to wide acclaim and the show ultimately positioned MNZ as an unexpected, yet prominent upcoming skate-associated brand with one of the models being “pro skater,” Tyler Blue Golden, who allegedly advised on lengths and cut for the pants.

The extended casting of her show, much like the wider blueprint of the New York shows, was never slow to represent the cultural zeitgeist… And this show was no different.

With a diverse “who’s who” that nullified shape, gender and age archetypal models, it further casted regulars—the great Andre Walker, the designer’s husband, Uday Kak and other familiar faces including Susan Cianciolo, Paloma Elsesser, and Lili Sumner, to name a few. 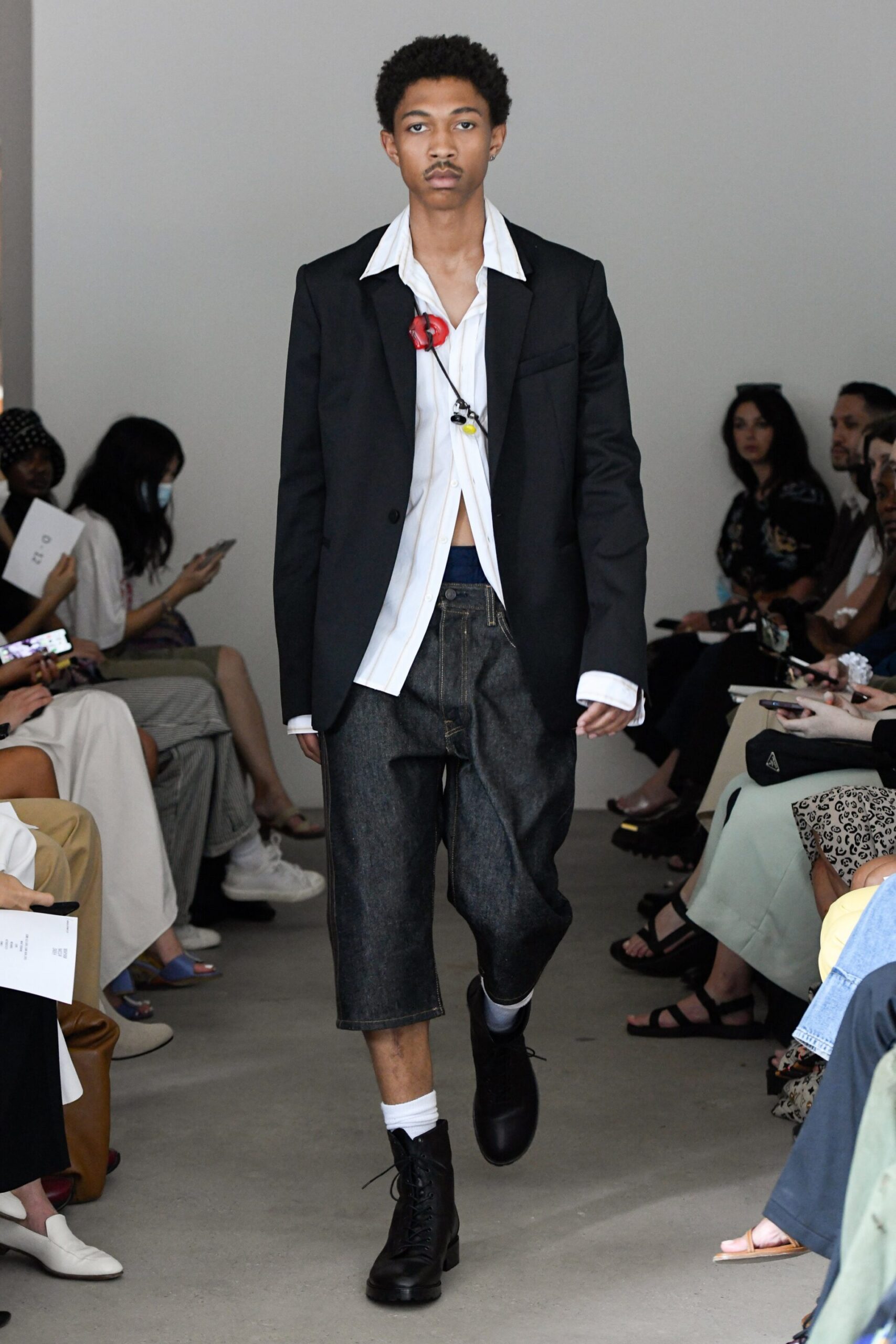 The humble and chic style of MNZ’s collections was intentionally unisex, and her experiments with colour, fabric and cut have subtly evolved over the years culminating a masterclass of thoughtfully subtle tailoring.

In an industry that is often plagued by strategy and brands that spite their own noses to smite their face (or whatever the saying is), Zadeh’s magic is in the intuitive and consistent repertoire of work. Her collections have a consistent level of covetousness that seem blithely forging a trend in and of itself. 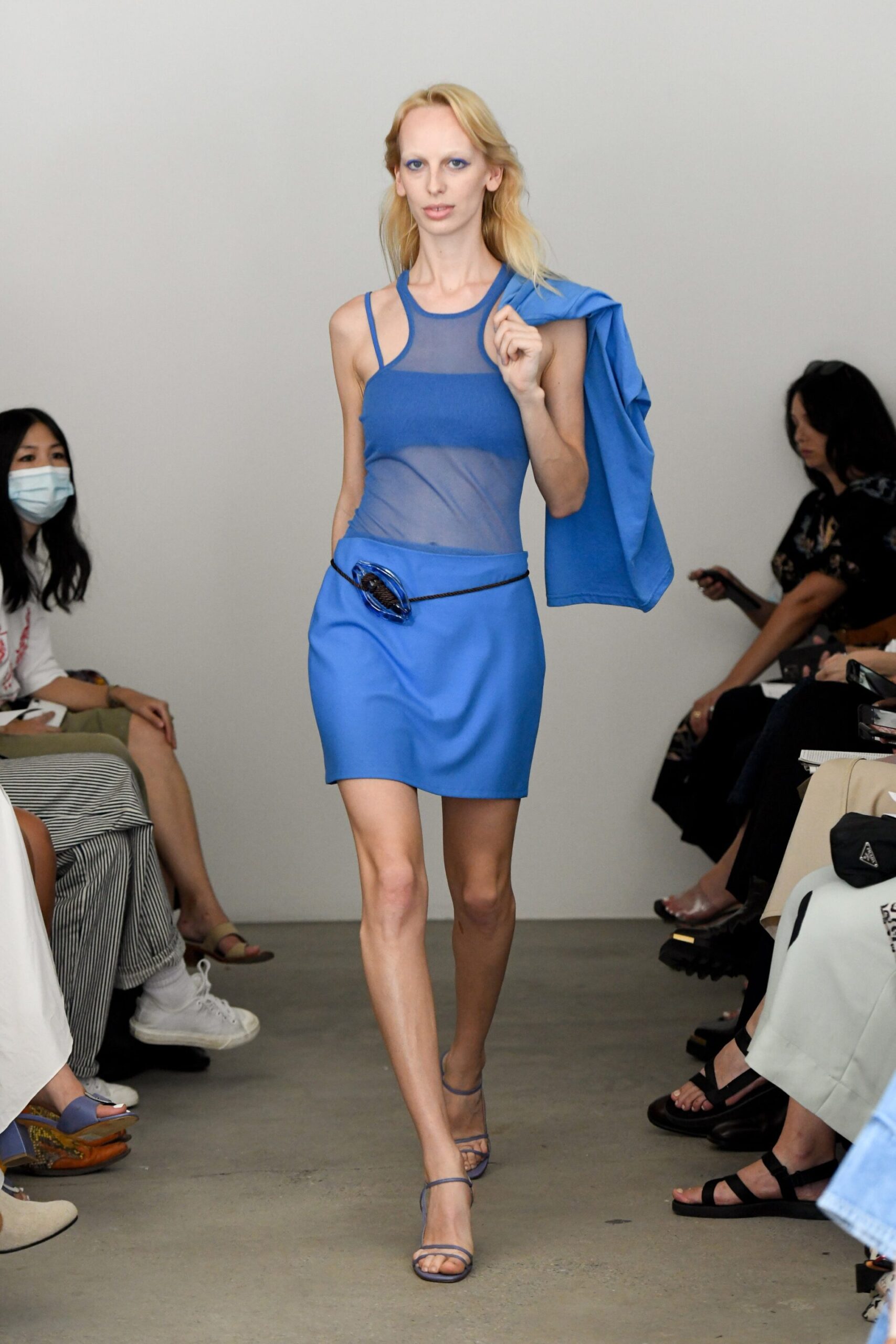 MNZ is exciting and refreshing, which acts as a testament in and of itself considering the current fast-paced and oversaturated fashion landscape. There’s nothing particularly showy, obvious or referential and each look is aspirational yet unprecious, consciously shying away from being trendy or overly stuffy.

This is especially apparent in the sensuality that runs through both the men’s and the women’s looks – a truly modern expression of sexuality and physical desire utilising clothing as the provocateur. 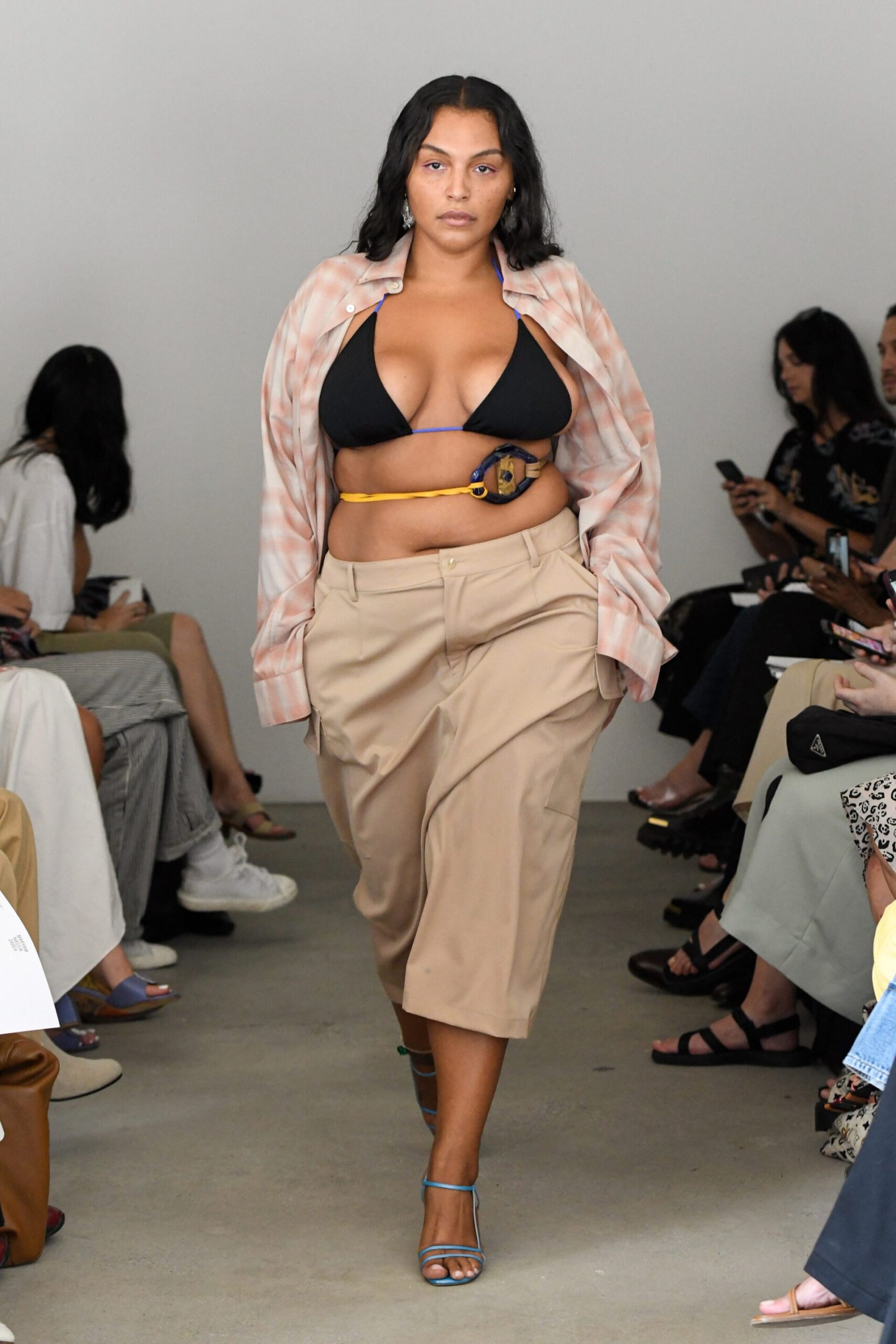 MNZ also used its shop space to present its collections for the first time, which was aptly described as a “homecoming,”  and namely, the queen of contemporary, New-York “cool” looks as if she’s marking the start of an illustrious reign.