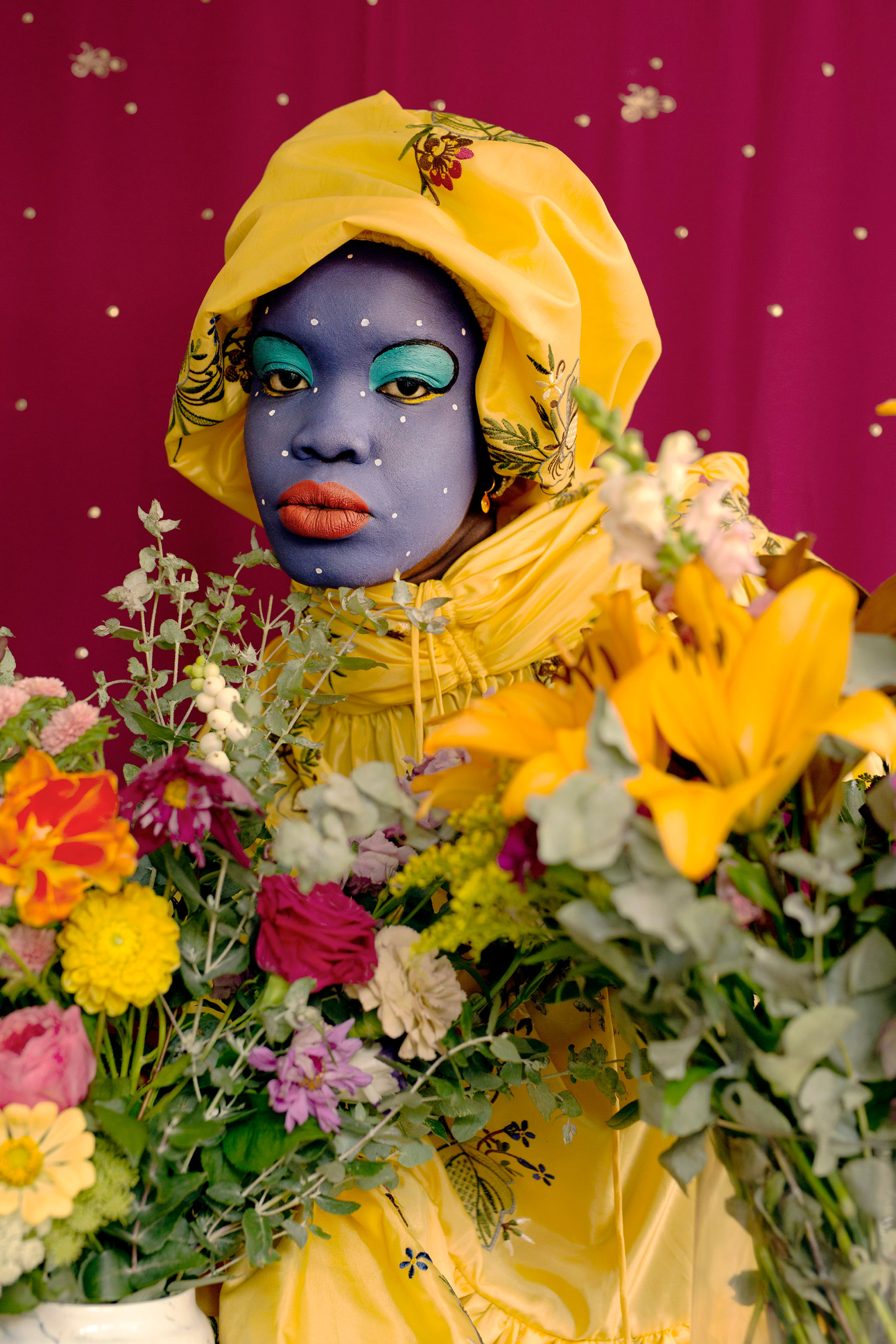 Atong Atem – A Familiar Face on a New Horizon

Classifying artists as emerging, mid-career and established is slippery. I start to think about the connotations that come with these career stages when speaking with Atong Atem, who, although a self-proclaimed ‘emerging artist’, boasts a resonant, rigorous and momentous practice.

Atong Atem started exhibiting her work in 2016 and in the same year was awarded the MELT Portrait Prize at the Brisbane Powerhouse. She has since gone on to exhibit ​at reputable Australian institutions including the Immigration Museum, the NGV, MUMA Monash, Gertrude Contemporary and Australian Centre for Contemporary Art, as well as internationally; she has also won several prestigious awards, most recently the inaugural La Prairie Art Award. This traction tells of an artist who has a powerful ability to convey meaning. Working within the medium of photography and tradition of portraiture, Atem acknowledges the influence of Cindy Sherman, Malick Sidibé, Philip Kwame Apagya and Seydou Keïta in her work. However, it is the way she has applied the processes, tropes and languages foregrounded by these artists to her own experiences that harnesses the power most artists strive to achieve – the duality of maintaining a distinct style while upholding legible visual clarity.

Born in 1994 in Addis Ababa, Ethiopia, Atem migrated to Australia with her family when she was very young and now lives in Naarm/Melbourne. Atem’s observation of the othering of different faces, races and cultures within a predominantly Anglo Australia informs her pertinent representations of complex issues. “Still to this day, someone with dark skin, someone like me, is seen as an outsider and uncommon and it can be quite alien and threatening to lots of people.” The artifice of her portraits is created by symbolic devices – makeup and colourful face paint, decorative props such as flowers and textiles, and fashion – which function as tools for probing at the relative notions of ‘normal’ and ‘beauty’. Atem comments on the experience of being othered as “so intense but also so fascinating – because in a way a blue face is almost more appealing, more safe than an actual person with facial difference or with a completely different skin tone than you’re accustomed to. I suppose it’s because you know the face paint comes off.” Atem doesn’t always use face paint on the sitters in her portraits, but all of her portraits are staged and frequently include an interventional device. Sometimes this is a creative process, such as weaving or scanning, while in other instances she harnesses props or makeup. Each device is tactfully applied so as not to cross over to the point of being a distraction; rather, the staged nature of her portraits points to very real experiences or interests – whether her own or the sitters’. 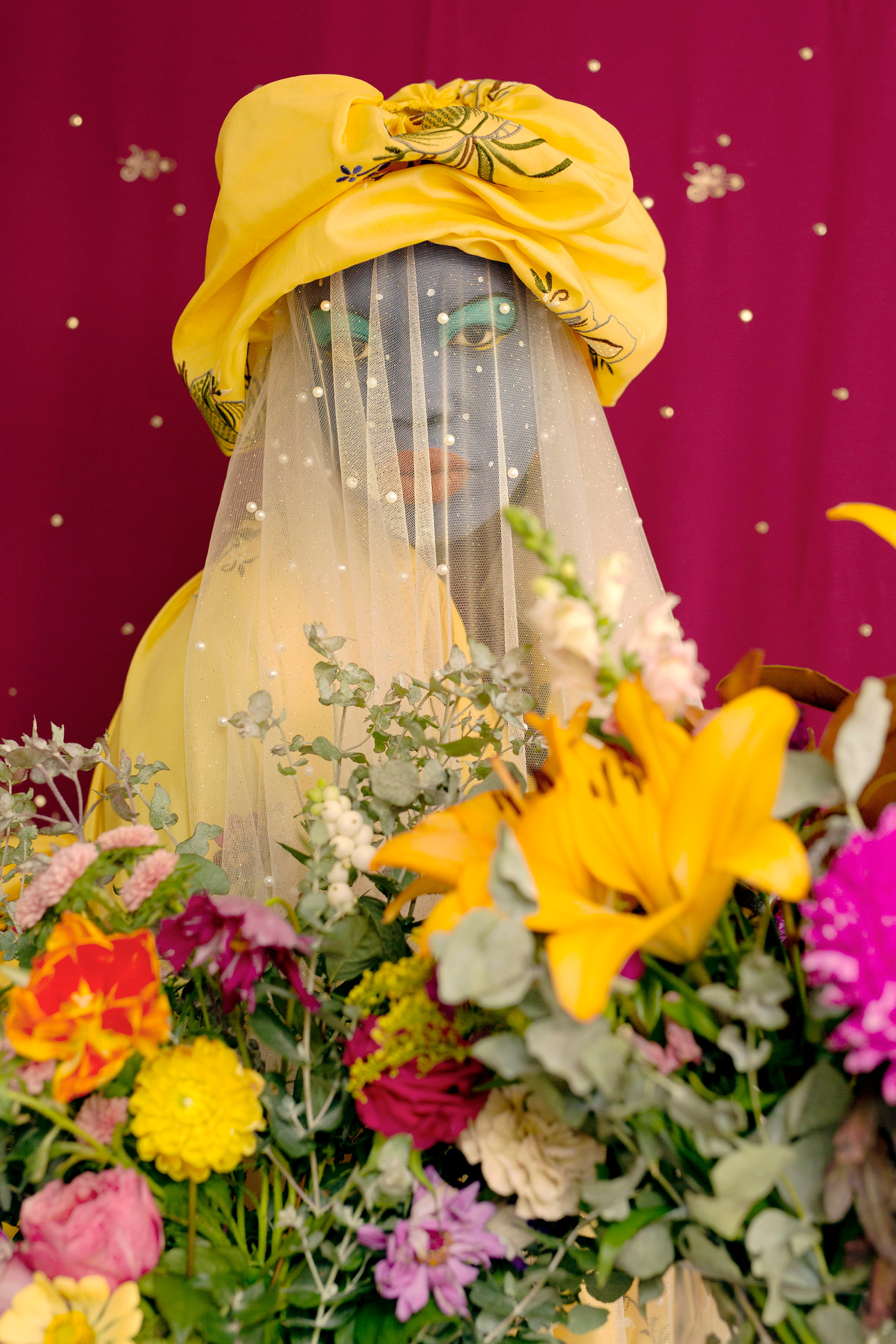 Reviewing Atem’s exhibition history, it is clear she is recognised for grappling with issues of cultural othering, postcolonial diaspora and identity, all informed by her personal context. Although these subjects are rightly mapped onto her work, her practice also speaks to many other intersections. Her latest achievement – being awarded the prestigious new art prize developed between La Prairie and the Art Gallery of New South Wales – brings an invigorating lens to the artist’s recorded story. The La Prairie Art Award focuses on the careers of women and includes a three pronged outcome of commissioning a new body of work for acquisition by the Art Gallery of New South Wales, a residency opportunity and an invitation to Art Basel. La Prairie is a Swiss luxury skincare company initiating creative opportunities that maintain an international outlook while connecting back to Switzerland. Considering the particularities of the award Atem comments, “It’s quite amazing and refreshing for me to be the recipient of this award because as someone who sits outside the centre in a lot of ways, to have my womanhood recognised is not always a given.” Back in the ’90s British historian Kobena Mercer identified this sentiment in his essay ‘Black Art and the Burden of Representation’ – evidently the expectation on artists to be ambassadors for a crystallised ‘issue’ for the sake of making a clear point is a reductive process that continues to this day. “There are people who exist in the intersection of women and pretty much anything else, and they often aren’t seen as women, they’re seen as that other thing. It’s often hard to be seen as a whole person when you are multiple ‘marginalised’ identities.”

In December 2021 Atem began working on a new body of work. The suite of five self-portraits is set to be unveiled along with her official reception of the La Prairie Art Award in late March 2022 at a VIP event at the Art Gallery of New South Wales. Ahead of the unveiling, Atem and I talked over Zoom where I was lucky enough to have a preview of the works. They feature the artist in vivid blue face paint, adorned in canary yellow satin textiles. Each of the five images are clearly part of the same shoot, however each work differs slightly – in some portraits flowers abundantly frame the sitter; in others an elegant veil further masks her face. “Initially I was looking at doing these physical masks but then it just didn’t come together in the way that I’d hoped. But masks are a part of my portraits anyway, so it made sense to do that subtle masking with layers of fabric – masking by being surrounded with colour and texture, and masking by using face paint as well.” The nods to kitsch aesthetics and makeup – specifically the extra ‘more is more’ styles of the ’80s – create a loaded surface upon which to consider our relationship to the feminine and the social. We see negotiations of ‘feminine’ practices such as sewing and crafts in the creation of Atem’s attire, connotations to nature and a conscientious handling of beauty.  Identifying her decision to explore recurrent aspects within her practice, Atem notes a kind of surrender to her enduring interests. “I just loved the idea of keeping in theme with what I’ve always done, and the references that I love, which are often floral and colourful and kind of uber feminine, but also of pushing it outside of my usual space.” We could consider Atem’s series a push into the power of being her own muse, grappling with herself as an artist and as a human being.

Functioning as a site for stimulating meaningful discourse and change, Atem’s La Prairie Art Award commission is no doubt a special addition to the Art Gallery of New South Wales collection. For Atem, the experiential outcomes of the award, including the residency and trip to Art Basel, are anticipated as transformative offerings. “I’m at that point in my career where I’m very much an emerging artist and I don’t have a lot of resources – and what resources I do have are often reinvested into my tools or life responsibilities – so the invitation to go to an amazing art hub such as Art Basel is really meaningful, because I don’t think I would do that for myself.” Having undertaken residencies before, Atem expects the travelling residency to be a catalyst for growth. “I think residencies should be a part of all major art awards, given awards are intended to nurture an artist’s practice.” Opportunities to expand and explore are so valuable because, unfortunately, emerging artists are often held back by the resources required to galvanise and then maintain radical growth.

The momentum of Atem’s career so far is as going in the right direction – which of course is so well deserved – however, the artist and I do ponder the institutionalisation of artists. Atem observes, “I think people often forget that there are others that are doing well, and I really want to bring people up with me and to remind the world that there are actually like seven thousand photographers who happen to also be South Soudanese women and are amazing.” Furthermore, the burden of representation means Atem works incredibly hard to realise the opportunities she seeks out or is offered, and the catch-22 is that “it’s actually quite hard to find time to make new work when you’re a ‘busy artist’ – time is taken up by everything that happens around the making of the art.” That being said, Atem is earnest and by no means self-pitying, rather reflective of her achievements and how they sit within the ecology of the art world. With a sharp mind and discerning eye, Atem is set to embrace the space she has been granted to nurture and grow her work into new horizons.