Exploring Demna Gvasalia’s use of Parody in High Fashion

The midst of the late 90s was when I first encountered the parody t-shirt phenomenon. In the sprawl of Queen Victoria and Caribbean markets, knock-off logo parodies sat amongst bootleg Metallica t-shirts and lo-fi “Ugg” boots. Tees that said “Cocaine” in the Coca-Cola logo font, the McDonalds logo reimagined as “Marijuana”, a sea of $20 hits and misses. I started seeing them everywhere, especially when my older brother would go to the infamous and now-defunct Sailyards skate park in Melbourne.

Over the years I’d come to be totally desensitised to the format. Parades of streetwear and skate brands churned out a million variations of popular logos, potentially reaching the total peak by the late 2010s, in parallel with the resurgence of vintage resellers and bootleg fanatics. It said a lot about the impact of branding on a psychological level. Most surface-level bootlegging and parody garments in the streetwear market may be viewed as a humbling or destruction of corporate iconography, or rather a chance to buy into the aspirational vacuum and cult of luxury brands at a lower price point. 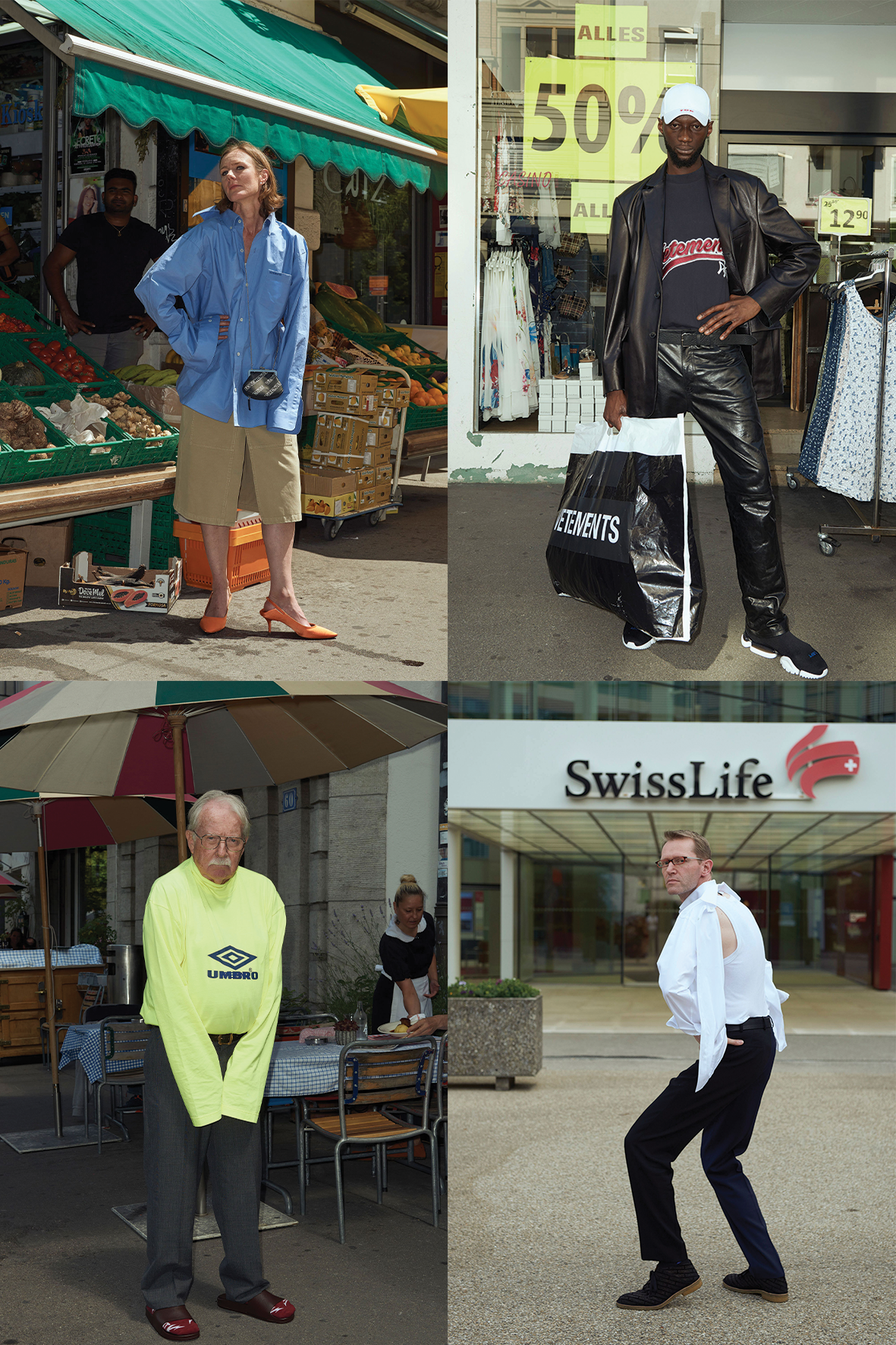 Organic casting in Zurich from Vetements 2018 “No Show” – Images: Vogue

Beyond the satire of streetwear though, various fashion designers, most notably the formidable Demna Gvasalia, have been using parody and “high-low” referencing as a tool to take the viewer and the wearer much deeper, beyond the garment. This umbrella concept is heavy across various mediums of design and communication, using parody as the canary in the coal mine of a deeper conversation, from artists like Tom Sachs, Darren Sylvester and Amalia Ulman, through to comedians and podcasters like Tim Dillon and Red Scare.

Demna Gvasalia’s grand influence over fashion in the hyper-accelerated age we live in is well documented, and his tenure at Balenciaga is one for the history books. What is sometimes left out of the discourse though, is his unique referencing system and silent dialogue spoken through garments. With many fashion designers often referencing the distant past, Demna’s referencing knows no temporal bounds, as he constantly mirrors societal icons and issues from current and recent epochs. One of his most iconic and best-selling motifs, the Bernie Sanders “Political” design, struck at a time of high political tension, using parody as a means to open up a wider dialogue around political values and the voting system. 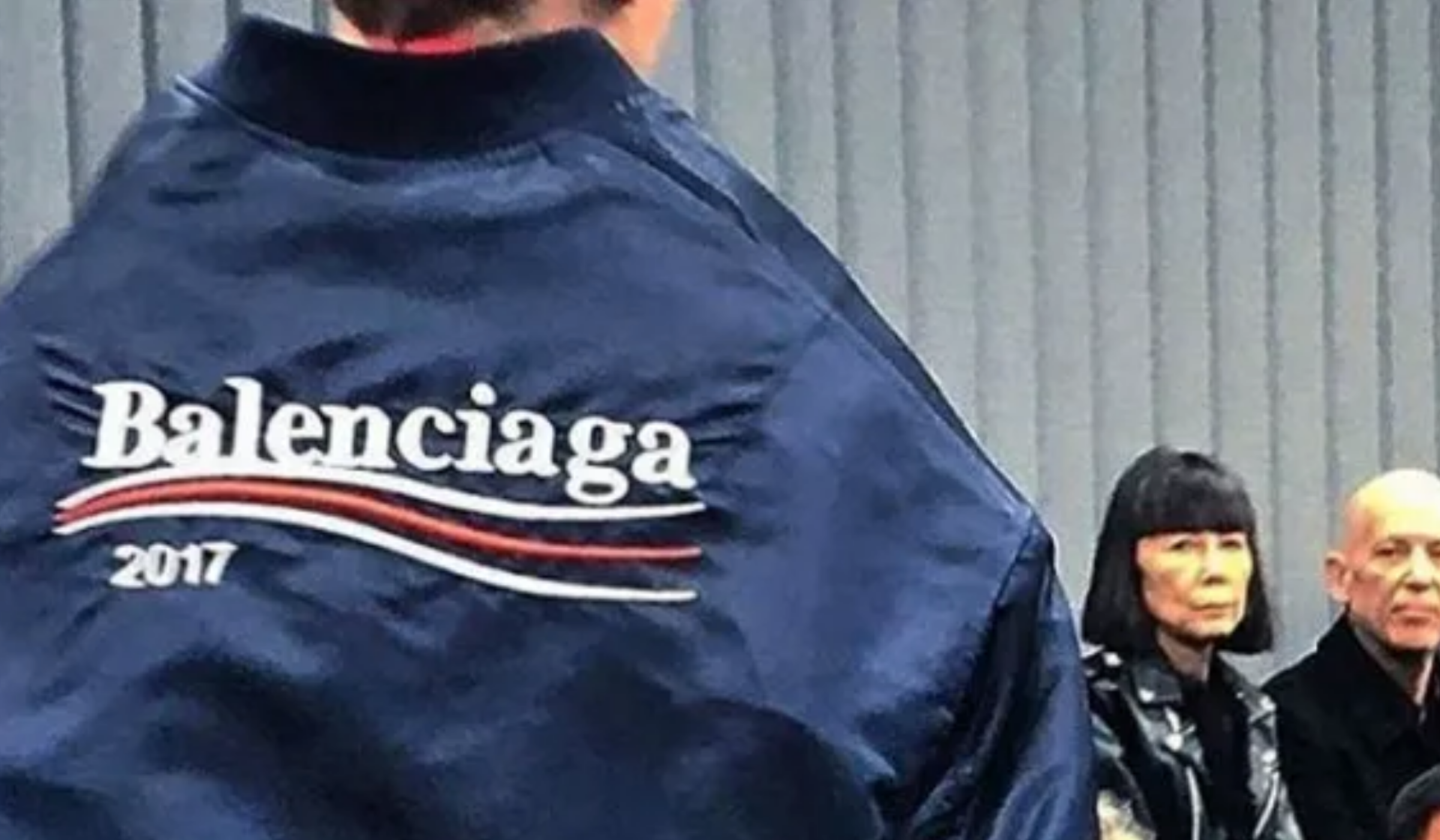 His willingness to interpolate the “everyday” into high fashion, such as his almost-Duchampian referencing of DHL at Vetements, or his persistent referencing of IKEA, supermarkets and the infamous iterations of the Supermarket shopper tote, sparks conversation about accessibility and class in a world that often shuns it. The tactical kitsch of the Vetements lighter heels, Balenciaga Manchester United knock-off jersey, the Balenciaga “Mastercard” motif, Croc-pumps, World Food Programme merch; all of it forms part of a larger narrative.

It was American artist Robert Rauschenberg who once said that he wished the world could find beauty in the everyday, and that “anything that reflects light” is of some importance, even a humble glass Coke bottle or soap dish. This loose sentiment seems to be echoed in the work of Demna, as well as the work of Demna-affiliate Lotta Volkova, who’s disruptive interpretation of his collections as stylist and muse focus heavily on realistic everyday aesthetics. 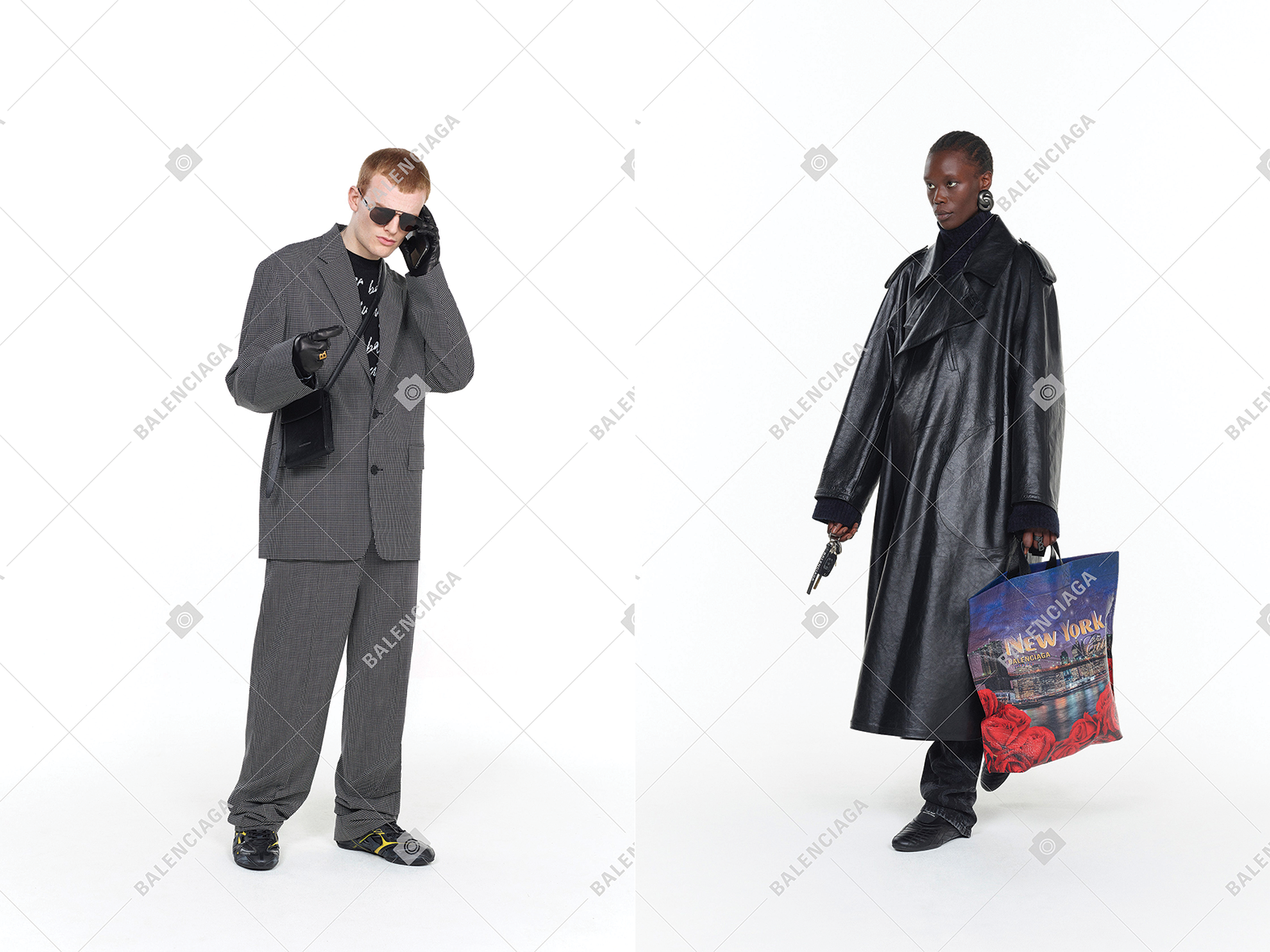 To trace Demna’s influence, you have to look at his upbringing in the Soviet Union, and the influence western iconography and access to global branding had after the 1991 collapse. Demna has often employed silhouettes and designs inspired by what is referred to as the “Slav” style and/or the “Gopnik” style. Often memed by the internet, on a deeper level these motifs represent a portal into pre and post-Soviet life, the aspiration of identity and the virtues of the lower and middle classes throughout that historic shift in Eastern European life. Demna himself, in an interview with Andre Leon Talley, spoke on how he’d never seen a fashion magazine until after the Soviet collapse, after which Vogue and other editorials flooded the community.

The “hype” and memeification of his work can often overshadow the nuances of his commentary. For someone who escaped the Georgian civil war as a child and has previously studied macro-economics, Demna is not a party trick. From recreating the parliament of the European Union for the SS20 Balenciaga show, to the apocalyptic Fall 2020 show, to the recent Fall 22 show set in a snow globe arena, Demna has used the runway as a medium to discuss issues ranging from climate change to war, the dynamic of power and political unrest. Even the Balenciaga Fall 2017 and Spring 2018 shows were a parallel deep-dive into the concepts of family values and the “Corporate Man”. 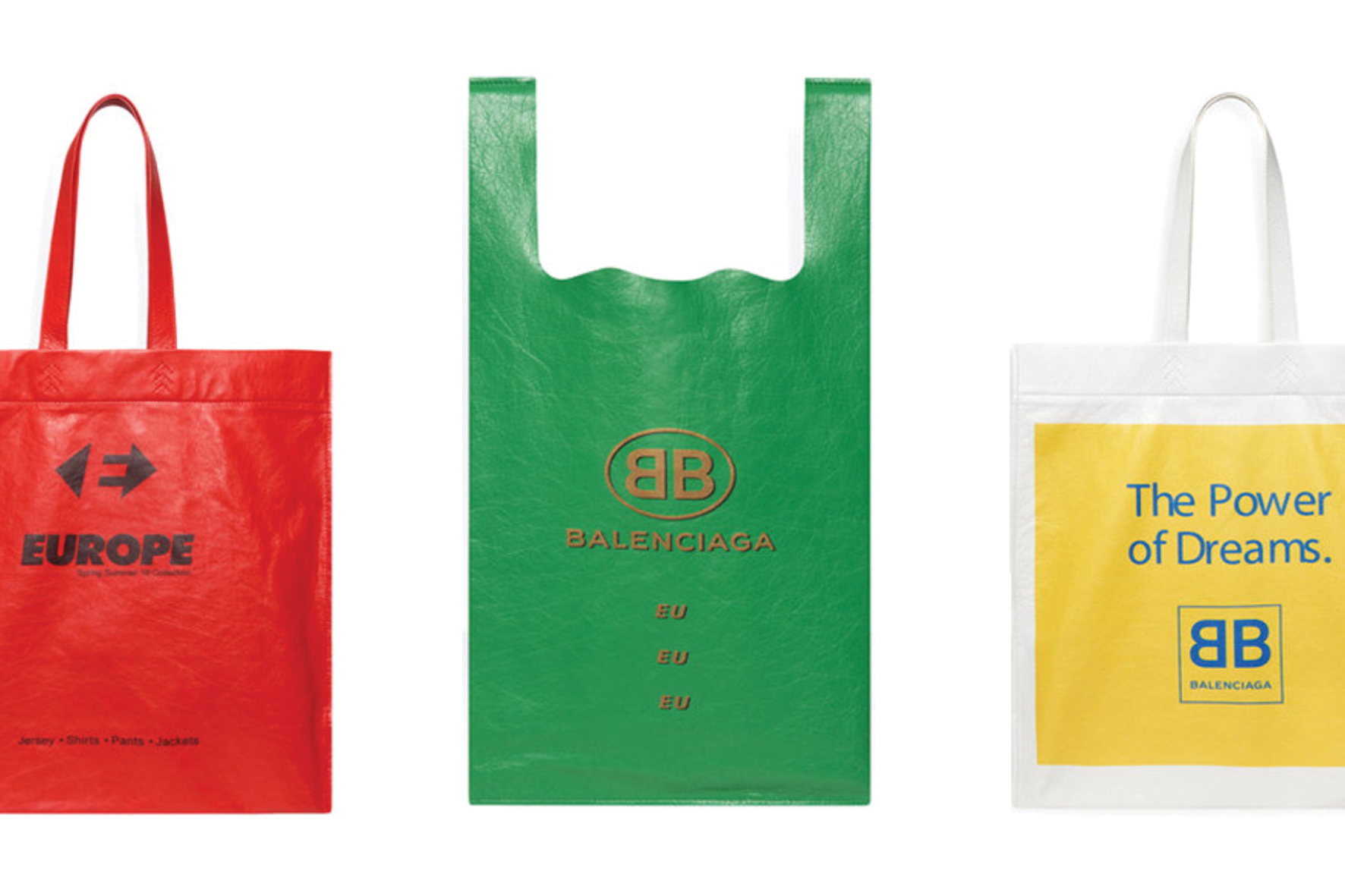 Set against a soundtrack of silence in a recreation of Cristobal Balenciaga’s original couture salon, Demna delivered a watershed moment, crystallising his “quirky” vision in tandem with solidifying his status as a genuine couture-level artist. Clashing textiles like fine vicuna and silk through to tech fabrics with aluminium chain-mail cable-knits, Phillip Treacy dome hats and bridal wear, it was something else. The juxtaposition of referencing between Cristobal’s legacy and Demna’s vision played out live on the world stage.

We could spend hours picking apart all the micro-references of Demna’s work, but what it essentially brings to mind from an overarching perspective is how the boldness of “parody” is an artist’s tool to open the minds of the spectator. His work has a coincidental parallel to the way society is progressing, from meme culture, the internet of things and “reality” television, through to the circus of war and governance, as we navigate a clickbait-era of political dialogue and global issues. We are collectively overstimulated and oversaturated through traditional and social media channels, as well as out-of-home advertising, and artists like Demna Gvasalia are the true progressives that are breaking through the clutter on both a mainstream and sub-cultural level. Shock value is nothing new, but it’s the execution that counts, and sometimes it happens to be the guy showing Hello Kitty bags on the runway that does it best.