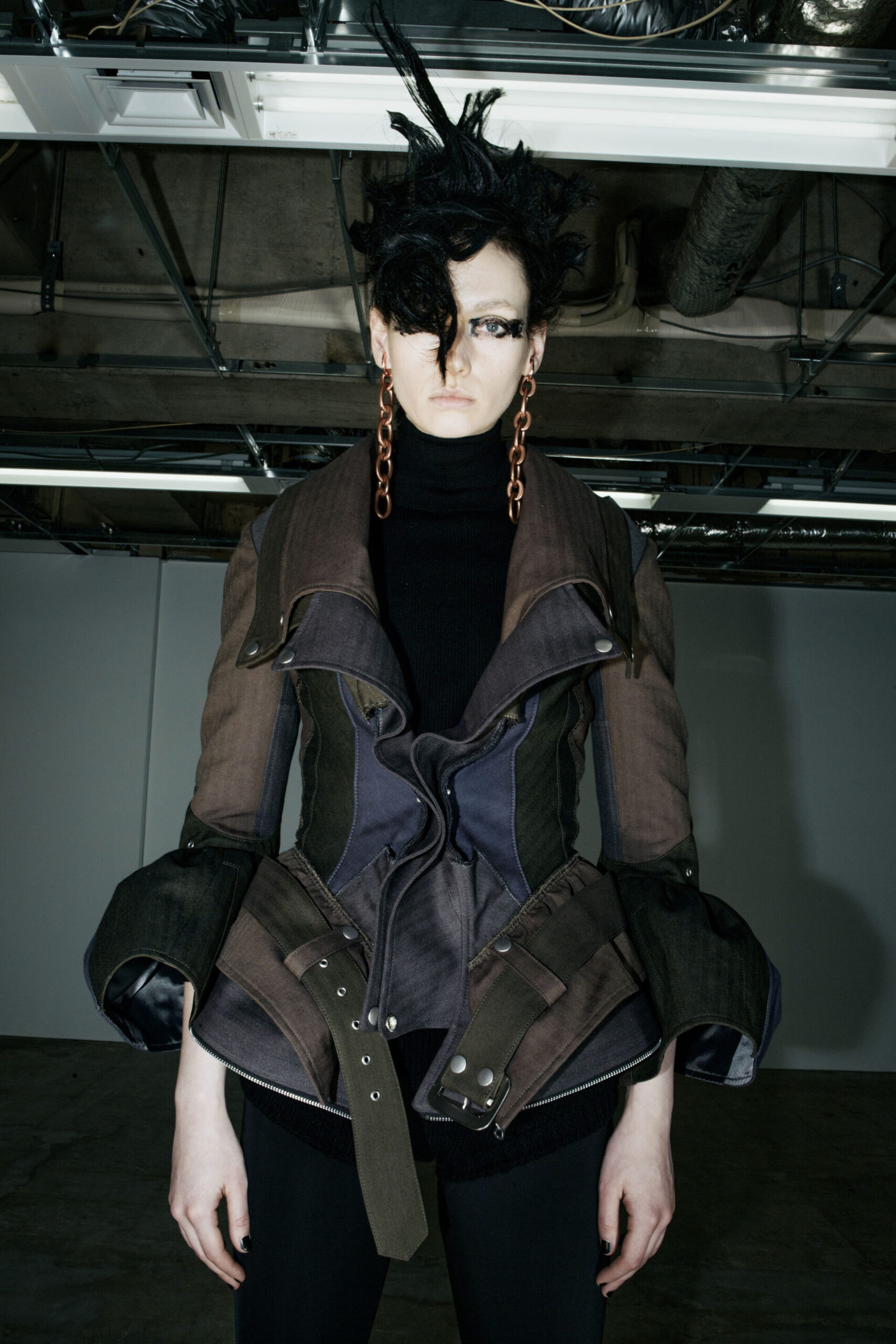 Deconstruction and reconstruction is what Junya Watanabe does best. Taking the known, injecting a slice of the present, and infusing something of the future into each one of his garments. The Fall 2022 digital presentation of his eponymous label saw him reinstall new life into old classics that the world has come to revere, in particular the motorcycle jacket, bomber jacket and wool check jacket. When designers are constantly trying to conceive and create something entirely new, trust Watanabe to take something familiar and poetically rework it. 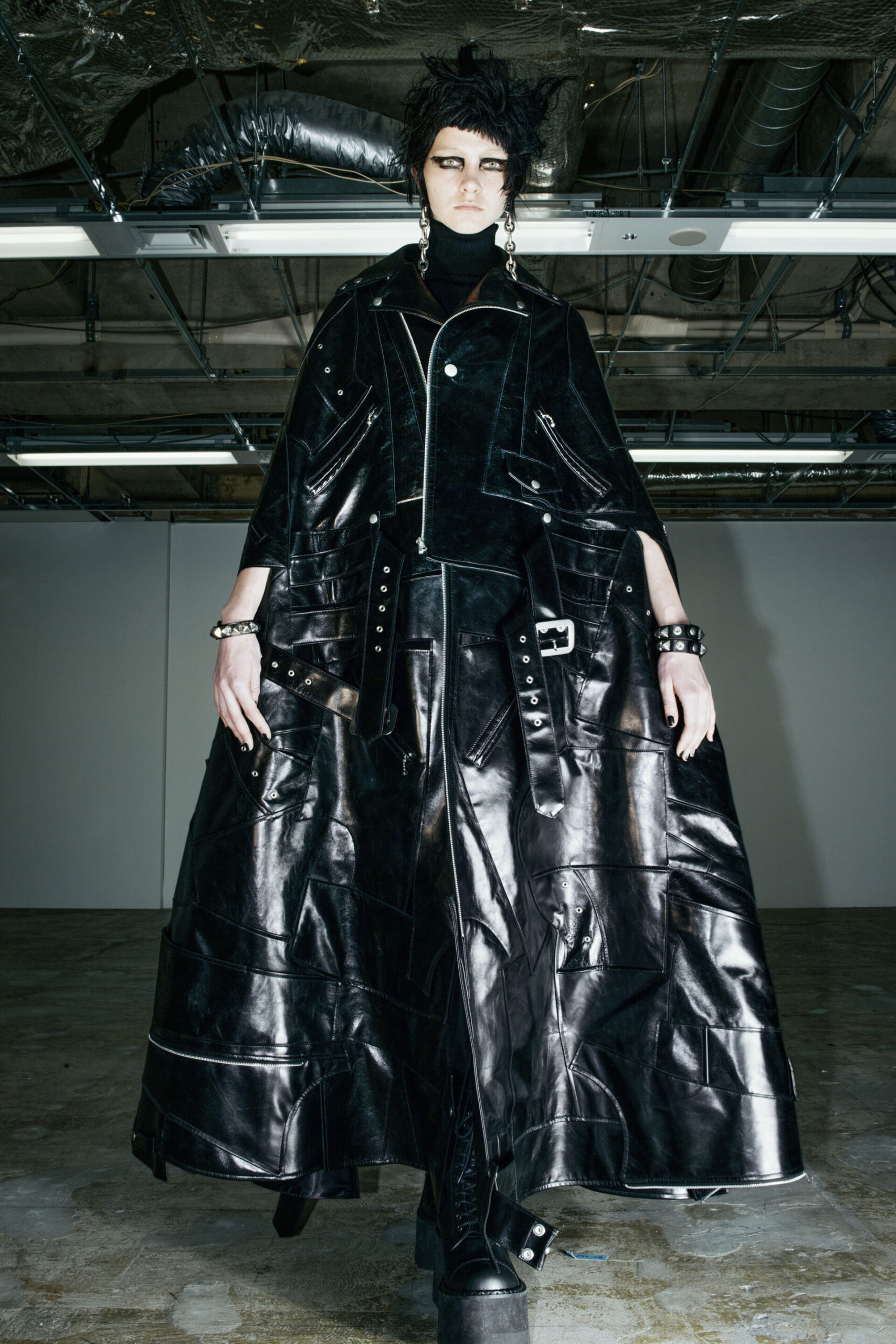 Shot in a white, unadorned studio, the collection was inspired by David Sylvian and Holger Czukay’s 1998 album Plight (The Spiralling of Winter Ghosts) spawning from the 1980s. Models statically appeared, flashed across the screen then evaporated like ghosts. Watanabe also notes that the track was a representation of his feeling about creation. Moreover, it wouldn’t be a Junya show without an elemental nod to some form of anglophile culture. Models adorned grungy jet-black hair, black lipstick and a punk attitude to go with it. 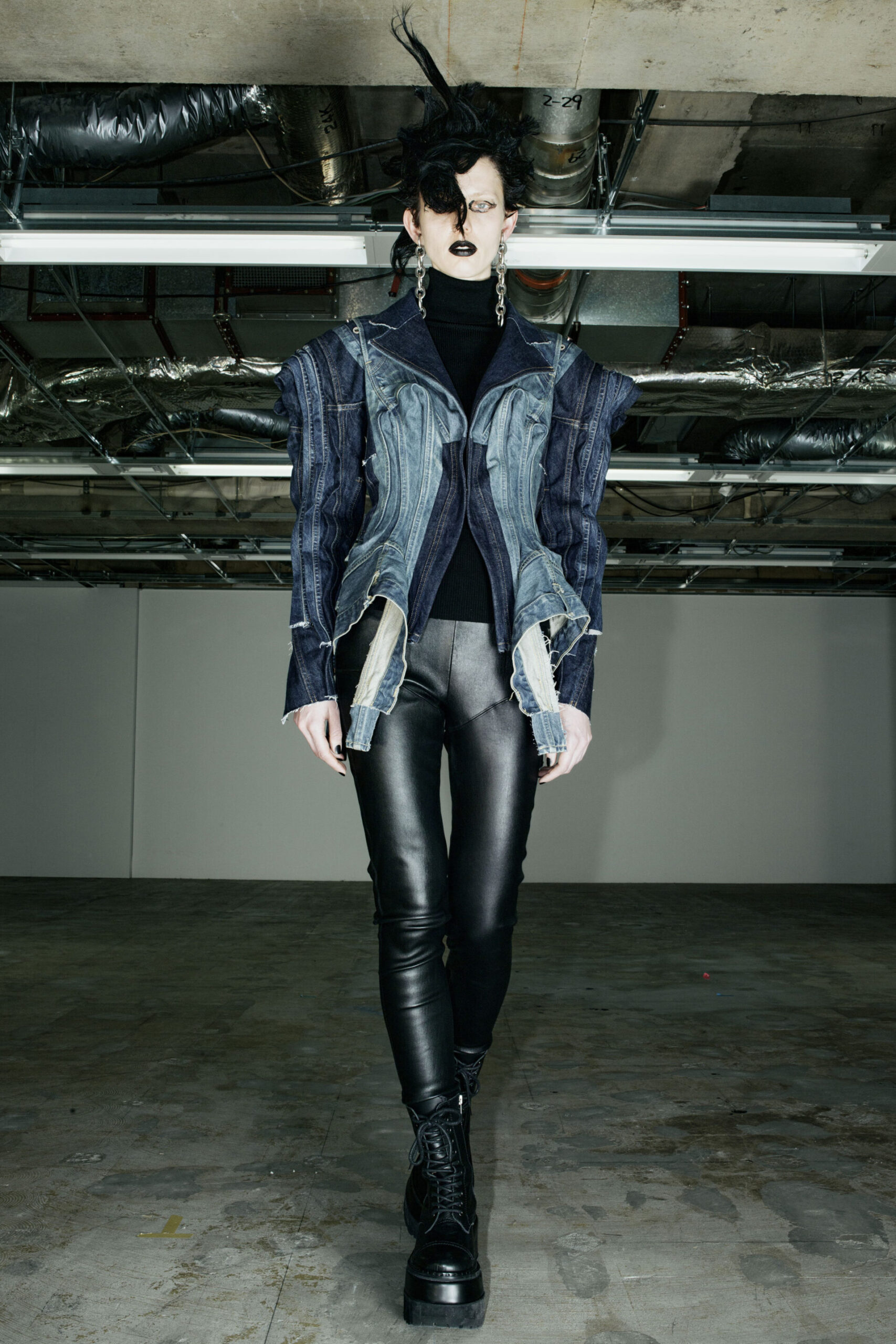 Leather pieces came together to create dynamic and bold silhouettes, whilst beltings, zips and strap details were made visible in newfangled ways. Notably, the classic khaki green bomber jacket with orange inner-lining that over the last 10 years most our eyes have grown hasty to were given a Watanabe twist. Deconstructed and crumpled, they were reproduced into multi-zipped dresses shaped with a technical prowess. Also present were scrunched up recycled denim jackets, with monumental shoulders. Fabrics were crimped together to rework the female form. Boldly structured check print capes had a pyramid-like strength to it, emblazoning confidence upon whoever decides to tout it. 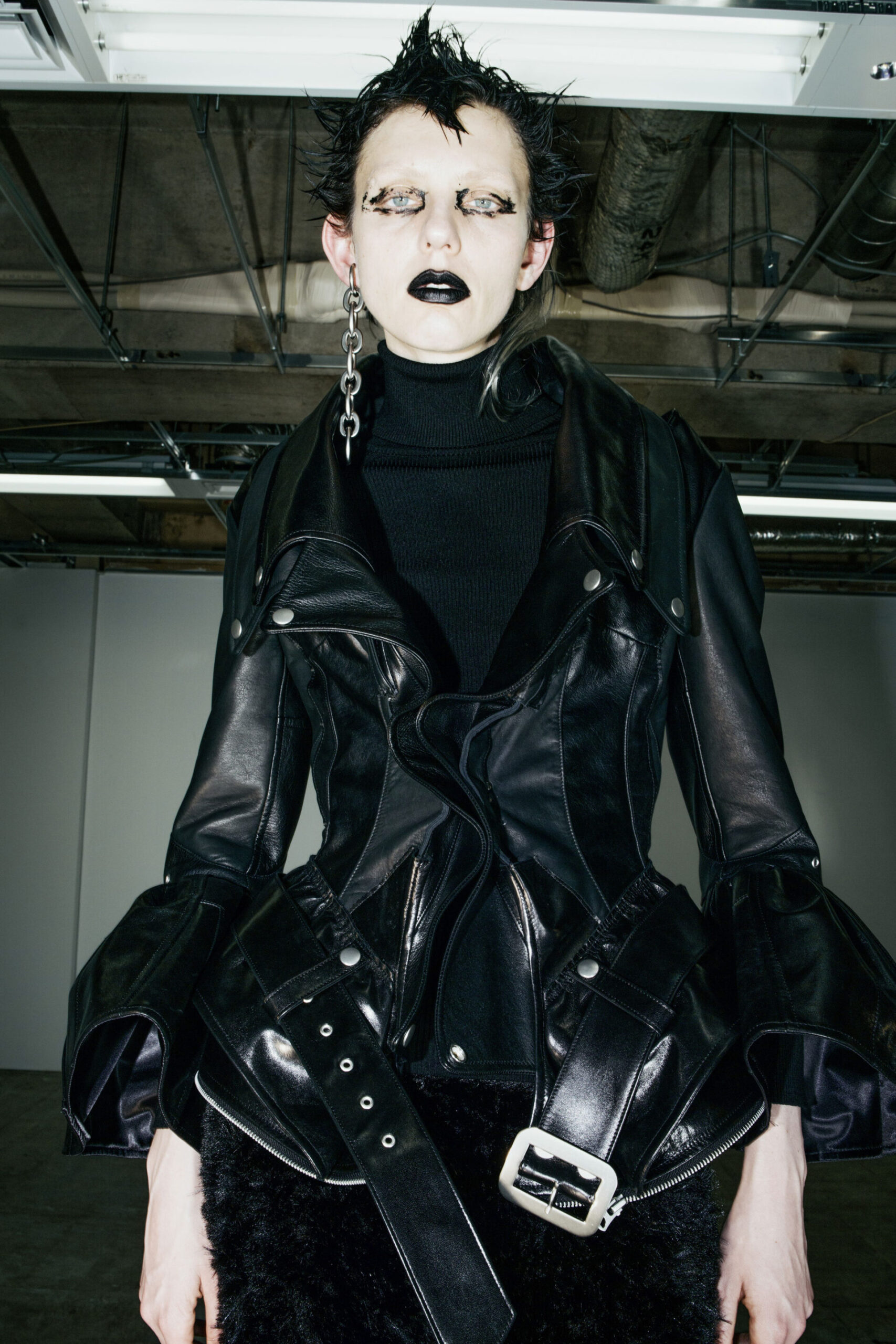 Like a vestige of a ghost, Watanabe made reference to some of his prior creations. A big fan of the classic motorcycle jacket, they were transformed into ruffled leather coats that were doubled belted and buckled with decorative allure. Fur-trimmed khaki jackets also manifested but as floor-length coats. Meanwhile, his signature patchwork technique displayed itself across three sharp looks with multicolored assortments of leather stitched together in a triangular-dress manner, then comfortably layered atop black turtlenecks. The Rei Kawakubo protégé is known for his exploration of new cuttings and inventive sourcing of fabrics, pushing him under a special vanguard. However, his work is still practical and bearing function. 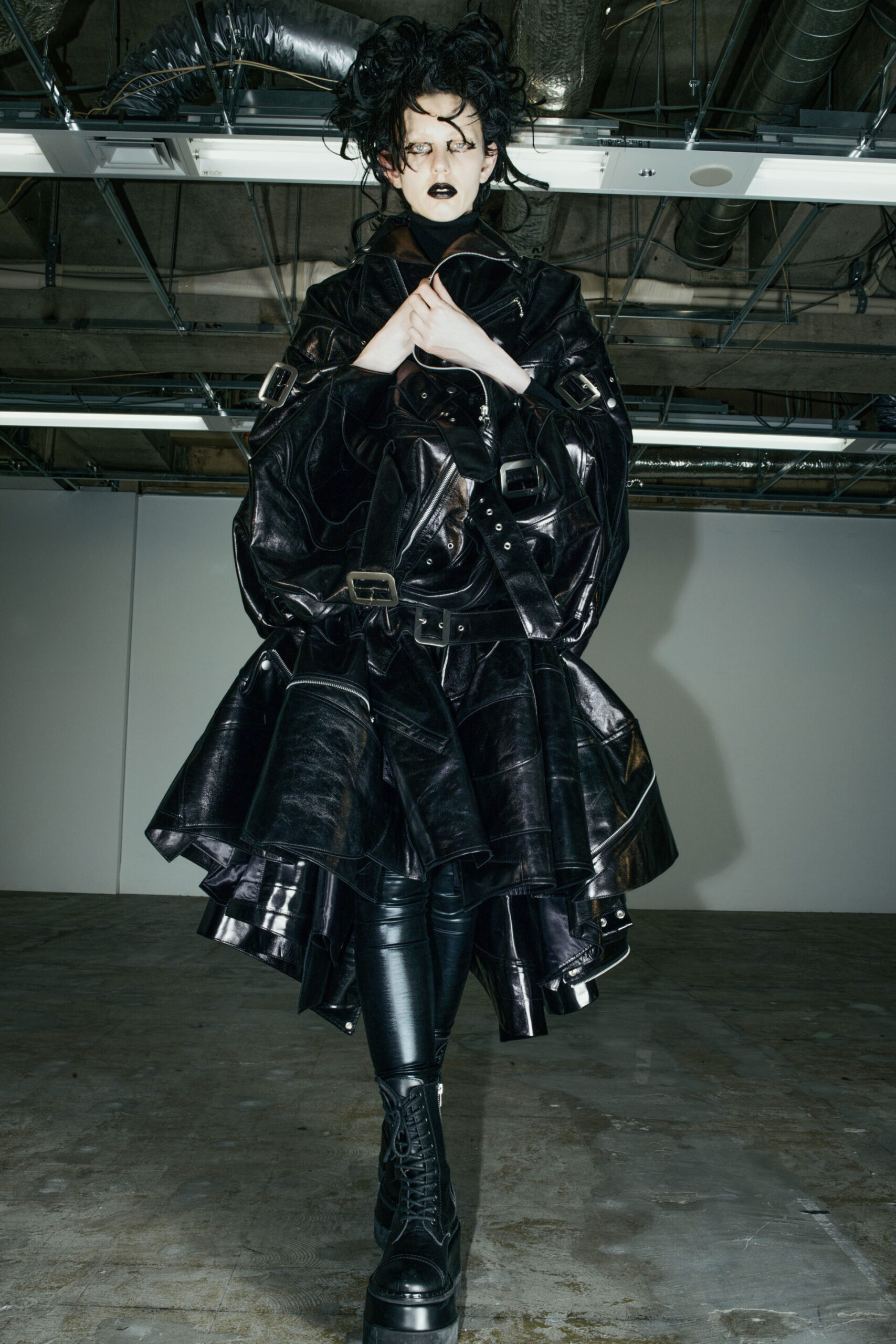 Born in Fukushima in 1961, Watanabe studied at Bunka Fashion College before beginning an apprenticeship at Comme des Garçons. He would eventually rise up the ranks before launching his own brand under the company umbrella in 1992. His avant-garde vision and approach that galvanised the 1990s resulted in his creations being dubbed as “techno-couture”. Watanabe’s body of work is characterized by experimentation and dissection. Yet there’s something elusive about Watanabe, being one to shy away from the public eye. For a designer who makes an effort to de-emphasise himself, his work has certainly shaken up a storm. 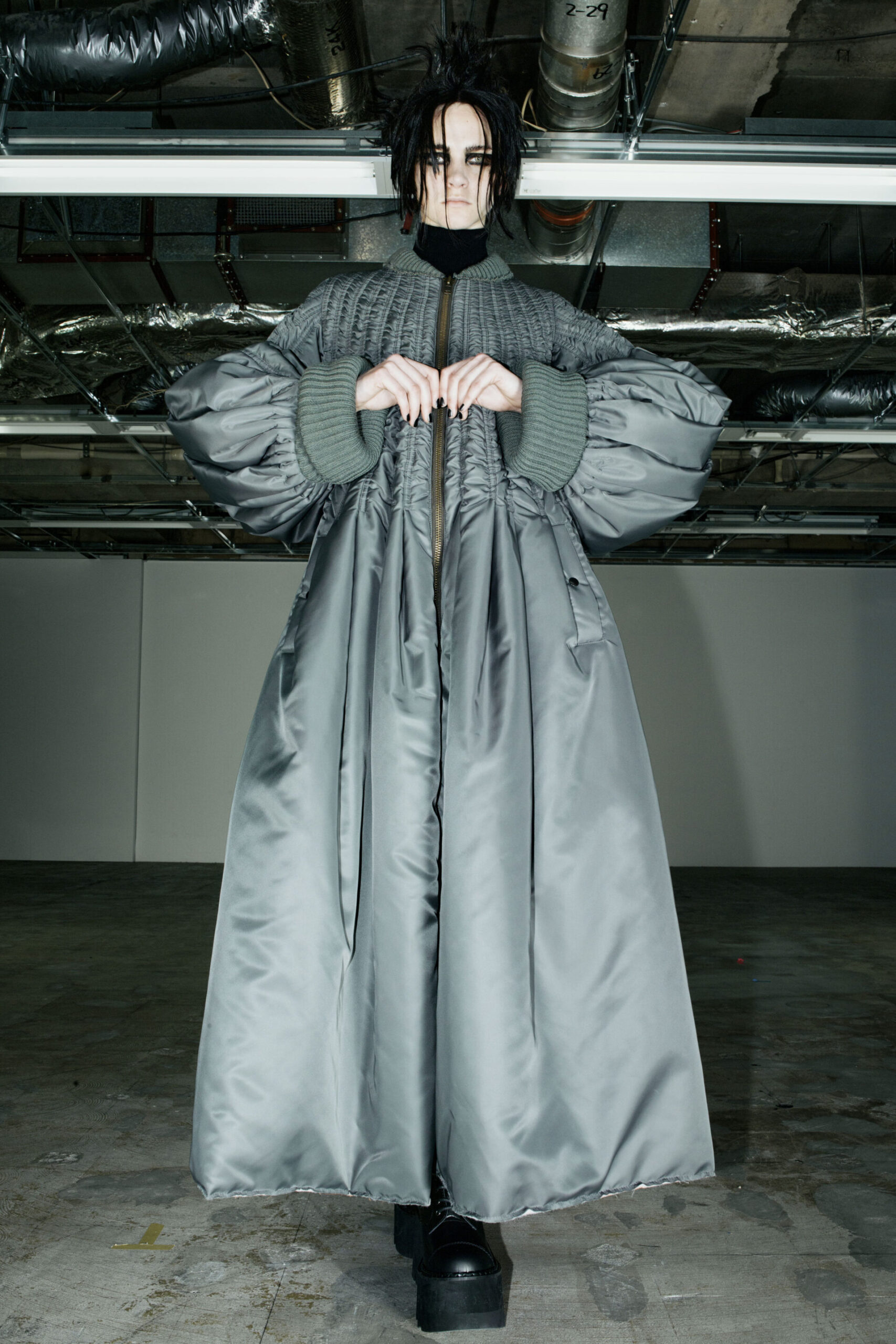 Watanabe often uses the Japanese word ‘monozukuri’ to describe his work, a word denoting ‘production’ or ‘the making of things’. It’s this spirit of know-how and pursuit of innovation that undeniably makes Watanabe one of fashion’s foremost intellects to date.

His latest unveiling was no exception, forging the perfect demonstration of how to transform the mundane into the marvellous.