Strong shoulders, elegant tailoring and warm hues were all on the menu in the French capital last week. The Parisian étape of Fall-Winter 2022 was a small triumph for menswear enthusiasts. Hello sartorial nuance and goodbye home office loungewear. After a sluggish two years it seems like capital F fashion is finally waking up again. Mary Janes even got their runway moment. And thought you’d seen enough of the puffer jacket? From what we’ve gathered, expect to see more next winter. Here’s a round-up of some of the runway shows we had our calendars marked with.

Rick’s ability to transfuse a feeling of dissidence into unconventional beauty is a sensation he has come to master. “STROBE” was the title of Rick’s latest collection, and illuminate the runway he did. Staged in the concrete chasm of Palais de Tokyo it marked a stark contrast to the smoky, plein air spectacle of last season.

Warmth radiated from the Dan Flavin-esque fluorescent lightbulb helmets that marched down the runway atop fluid silhouettes. The contrast of the headlights against the backdrop of the dismal basement symbolised the propagation of positive energy amidst a dark and rebellious spirit. Slithered in between the all-black ensembles were light dashes of rose pink and orange. Looks included goat trim parkas, retroreflective fabrics woven with yarn made from glass, menacing fully zipped hoods, and oversized duvet puffers. It was the perfect marriage of grunge and glamour – “glamasleazy” as Rick termed it. Both a confronting and satisfying vista to the eyes as “Lights” by Sisters of Mercy reverberated through the room. The pieces were more than merely just garments, they wore their own attitude. Thursday’s show was pure primal rawness and would have been enough to nourish the mind of any Rick devotee. 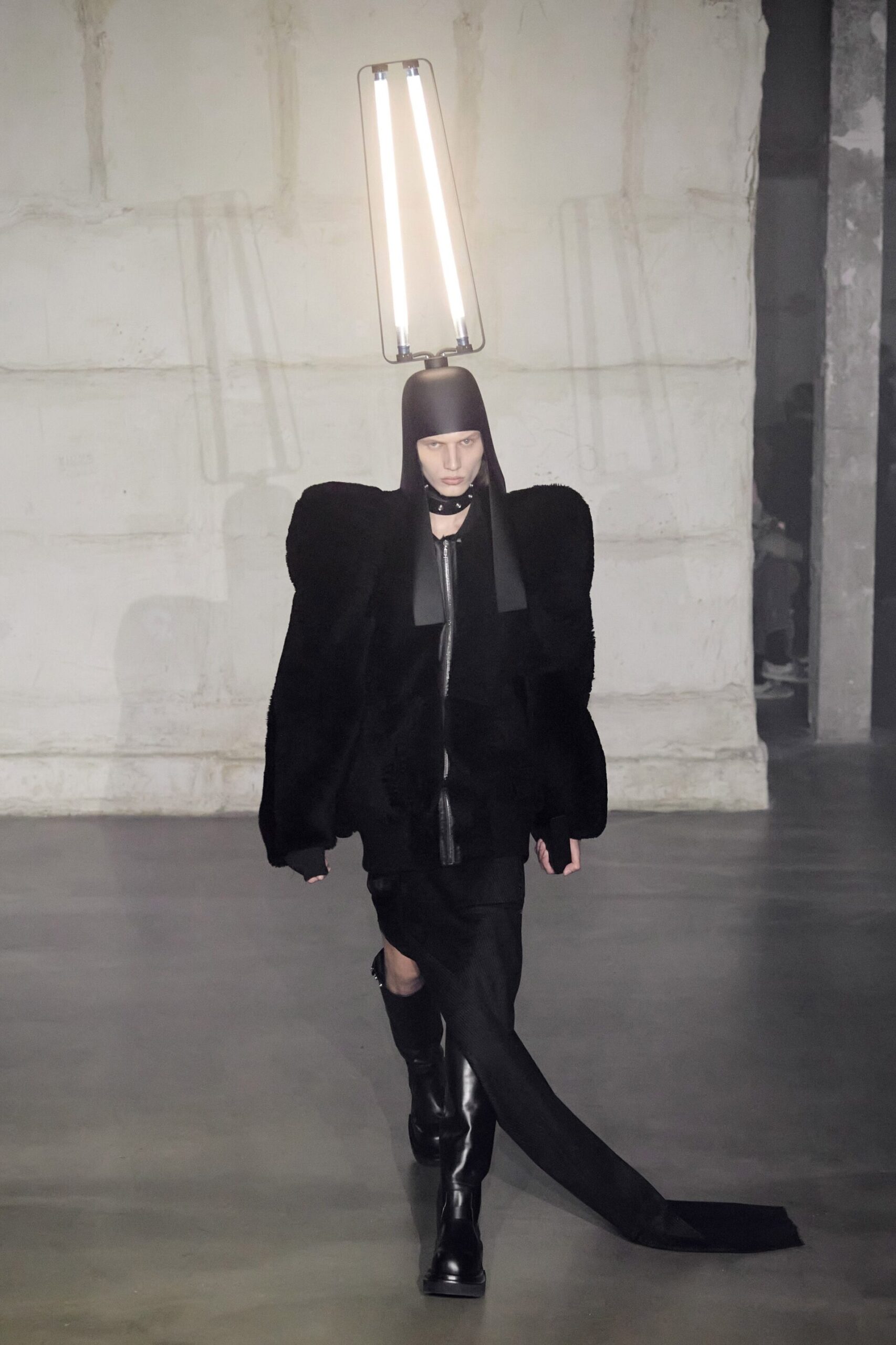 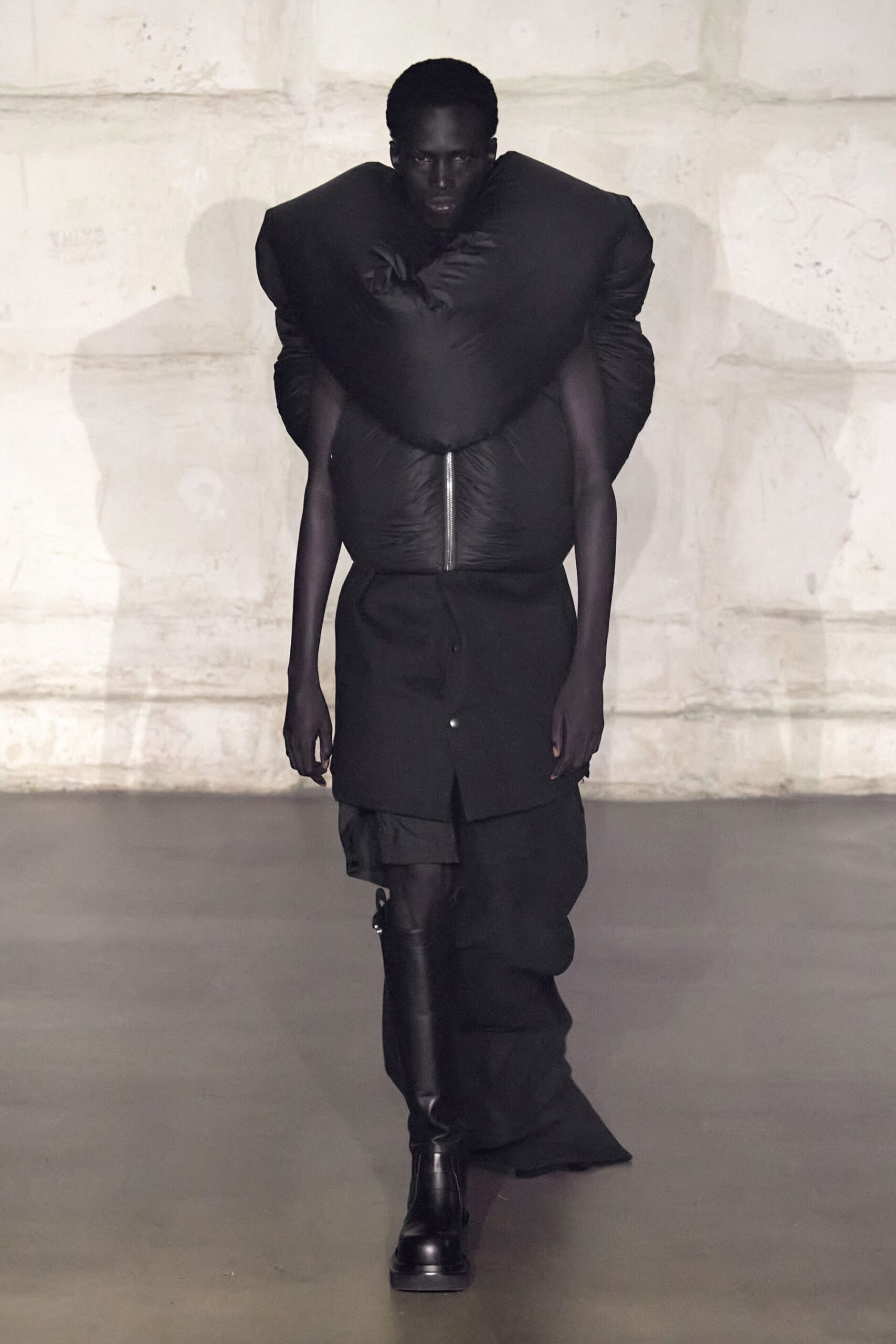 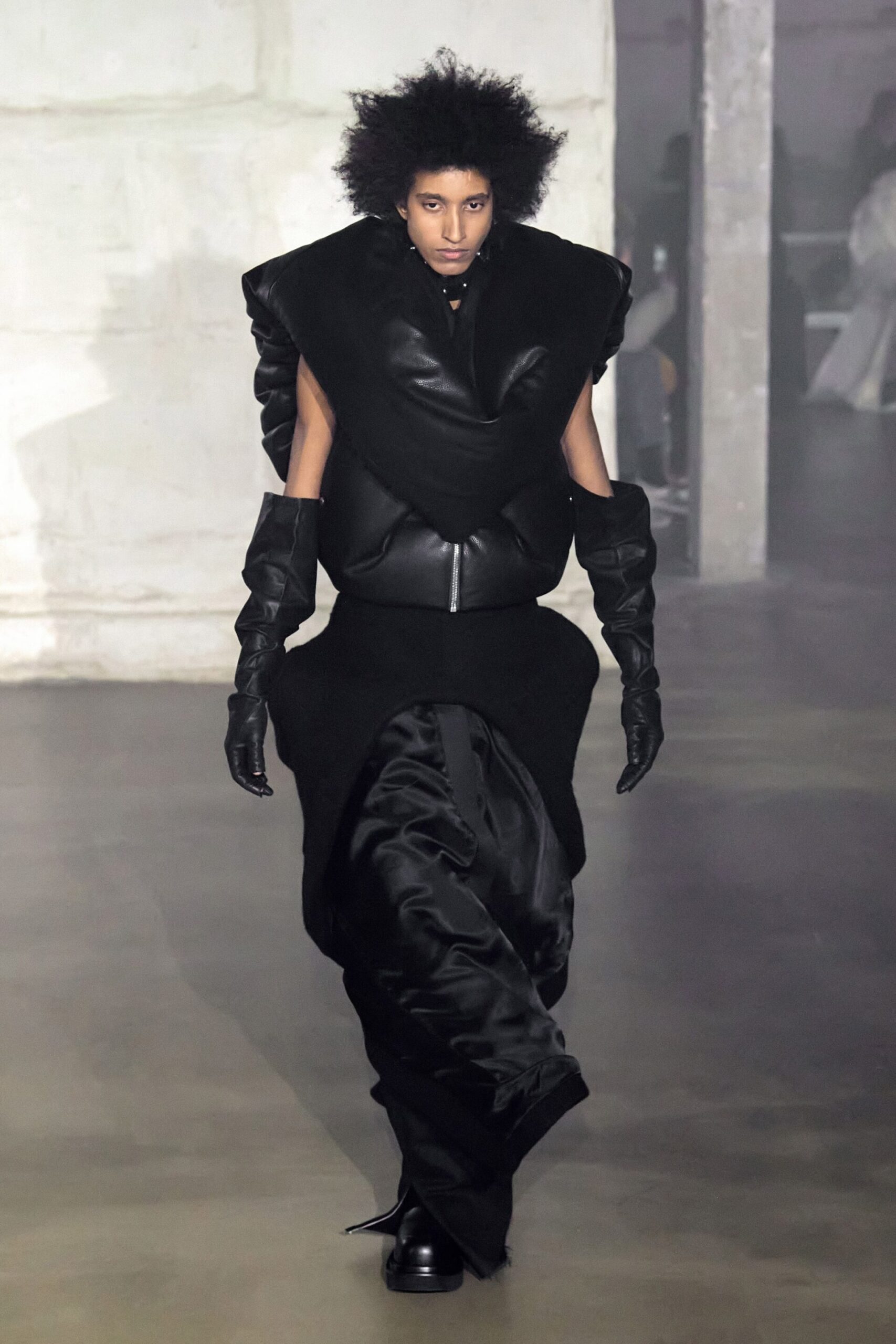 Next up on the agenda was Berlin-based brand, GmBH – what you get when you amalgamate Middle Eastern cultures with the underground techno scene. Started in 2016 by Benjamin Huseby and Serhat Isik, both children of immigrants, their brand serves platform to the duo’s dance with the themes of politics, race and religion.

Permeating their FW2022 collection was an intimate exploration of their sacred world and their relationship with Islam. Titled “Talisman”, their latest presentation was a meditation of craftsmanship, religious belief and queerness. In the show notes, they defined a talisman as, “an object that is thought to have protective powers and to bring good luck.” Hence the clothing symbolized their armour, reinforced by Arabic calligraphy that scrolled out affirmations such as “safe from harm”.

Sharp tailoring was the obvious highlight of the show, paired with thigh-high boots that chipped away at masculine norms. Bold fur collars also served clever reference to mid-century couturier Jacque Faith. The show was a perfect example of a young brand spreading its wings and maturing. 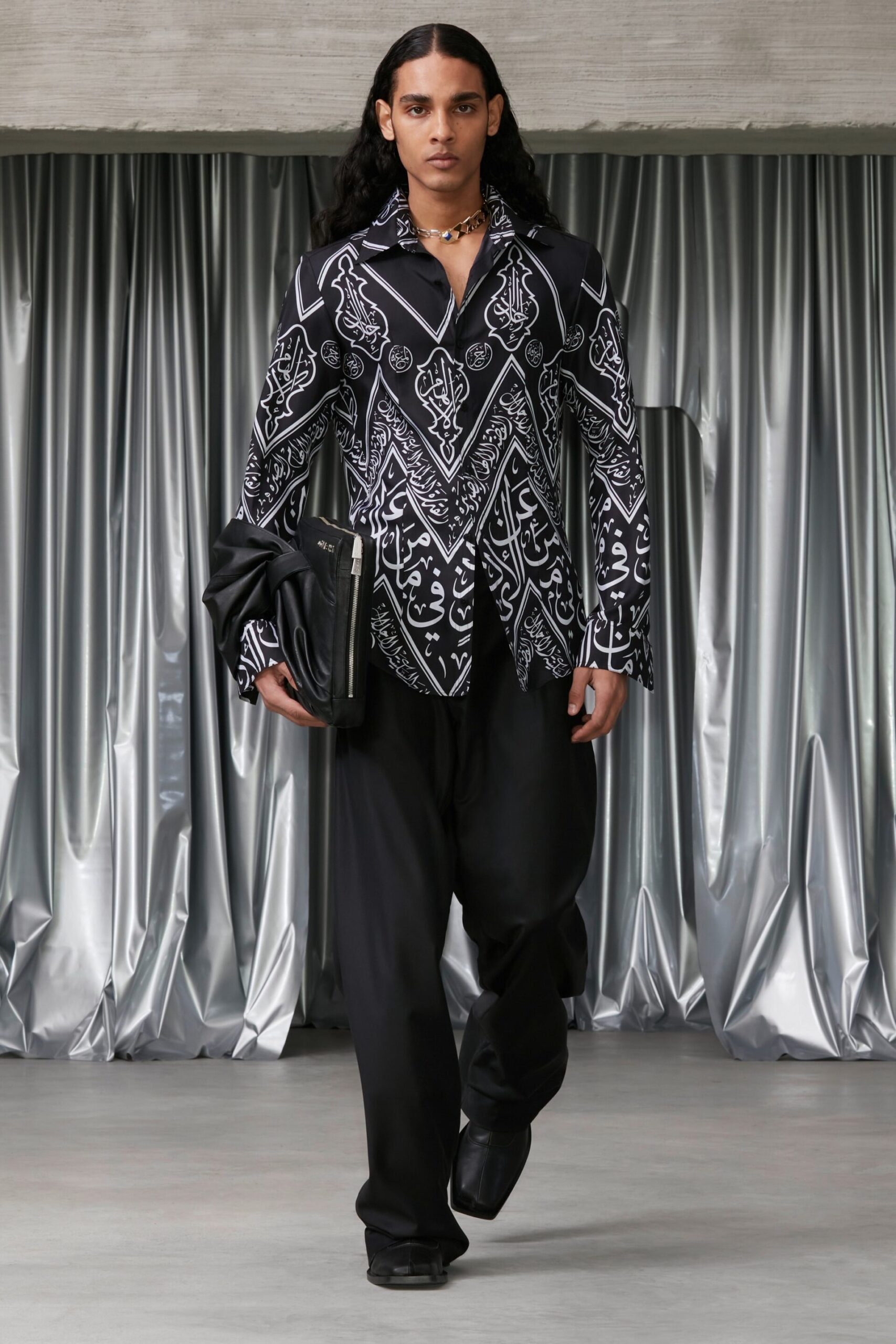 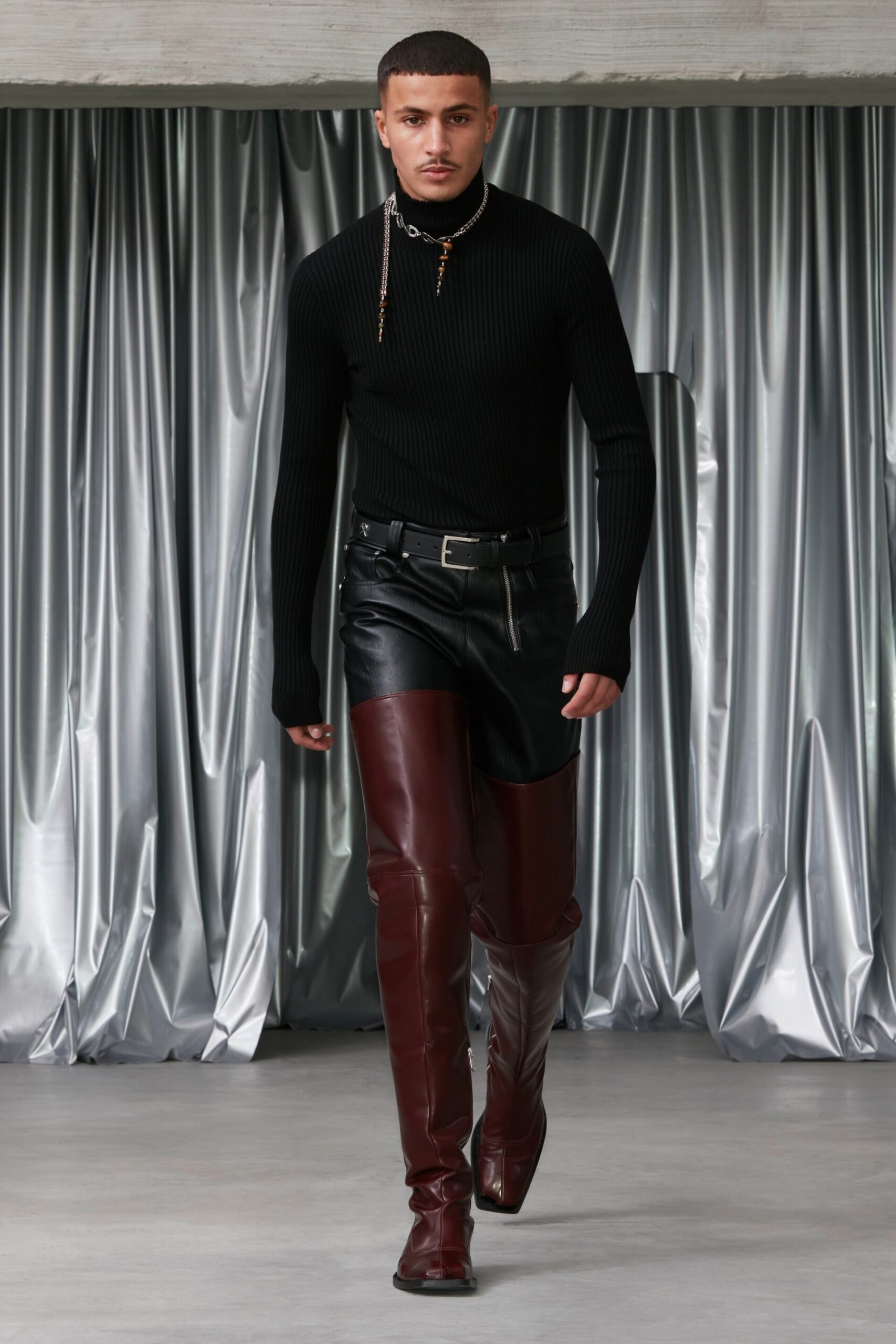 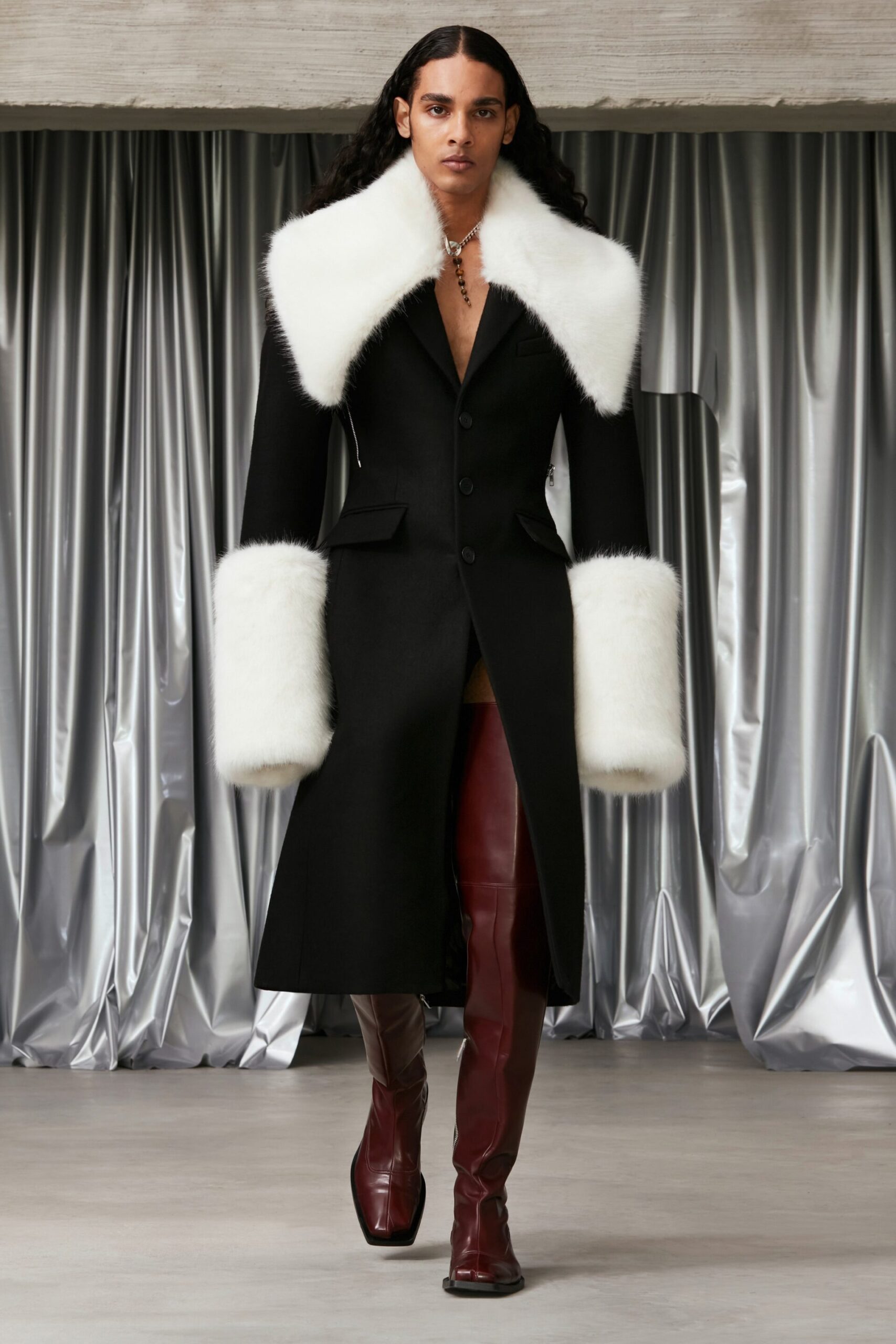 Dreams are an unbound space of possibility, an area that Virgil Abloh continuously foraged into and beyond. Last week’s Louis Vuitton Fall-Winter 2022 presentation was Abloh’s eighth and final menswear collection for the House. It was a touching tribute to the creative force who passed away from cancer almost two months ago. A disruptor, visionary, and seminal boundary breaker he was, his posthumous show clearly embodied that.

This collection served as a wide-eyed glimpse at all the shake-ups the Illinois-born designer brought to the timeless French Maison. Imbued across the pieces was a myriad of influences that all sparked joy upon Abloh’s life. References to art, cartoons, and even the NBA were all evident amongst the succession of models clad in crisp tailoring and varsity jackets. Louis Vuitton signatures such as the Keepall duffel bag also had their Abloh touch.

However, the clothing played a minor role in the day’s theatric performance. What manifested on stage in front of a teary-eyed crowd were the wondrous inner workings of a mind in a dreamlike state. Like Abloh’s LV shows have proven time and time again, they are a runway show like no other. As an orchestra performed an angelic soundtrack composed by rapper Tyler, the Creator, a group of dancers jumped up and around in what has been called, the “Louis Dreamhouse”. The combination of the music, the dance, the artistic references, and the audience, the show’s entirety symbolically reflected the uniting of all of the worlds Abloh consistently fought to bring together. But from the colourful creations to the playful choreography, it was clear that there was one distinct message that sung a little louder: you’re never too old to dream. Virgil Abloh’s dream became his life and then his life became a fairytale. 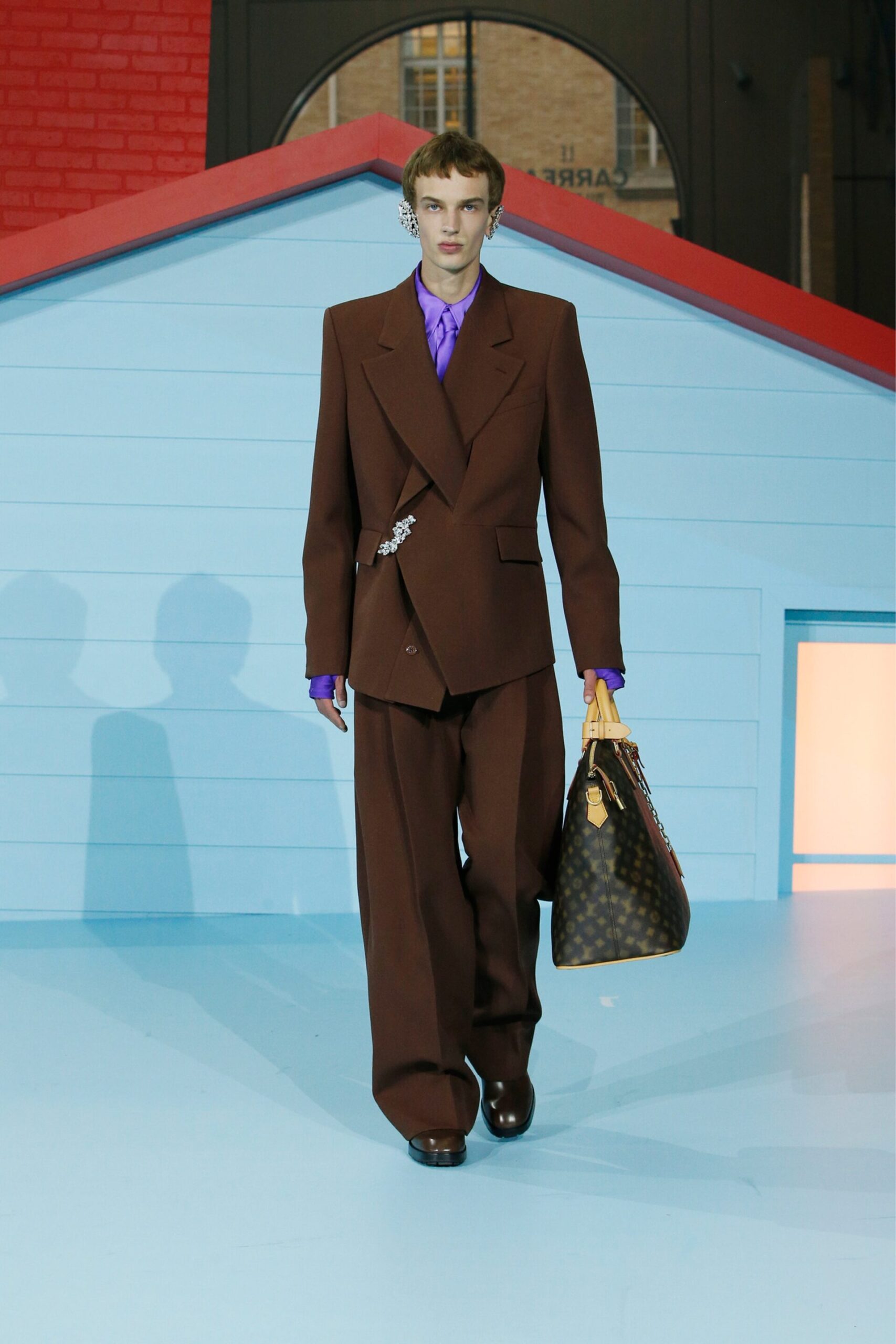 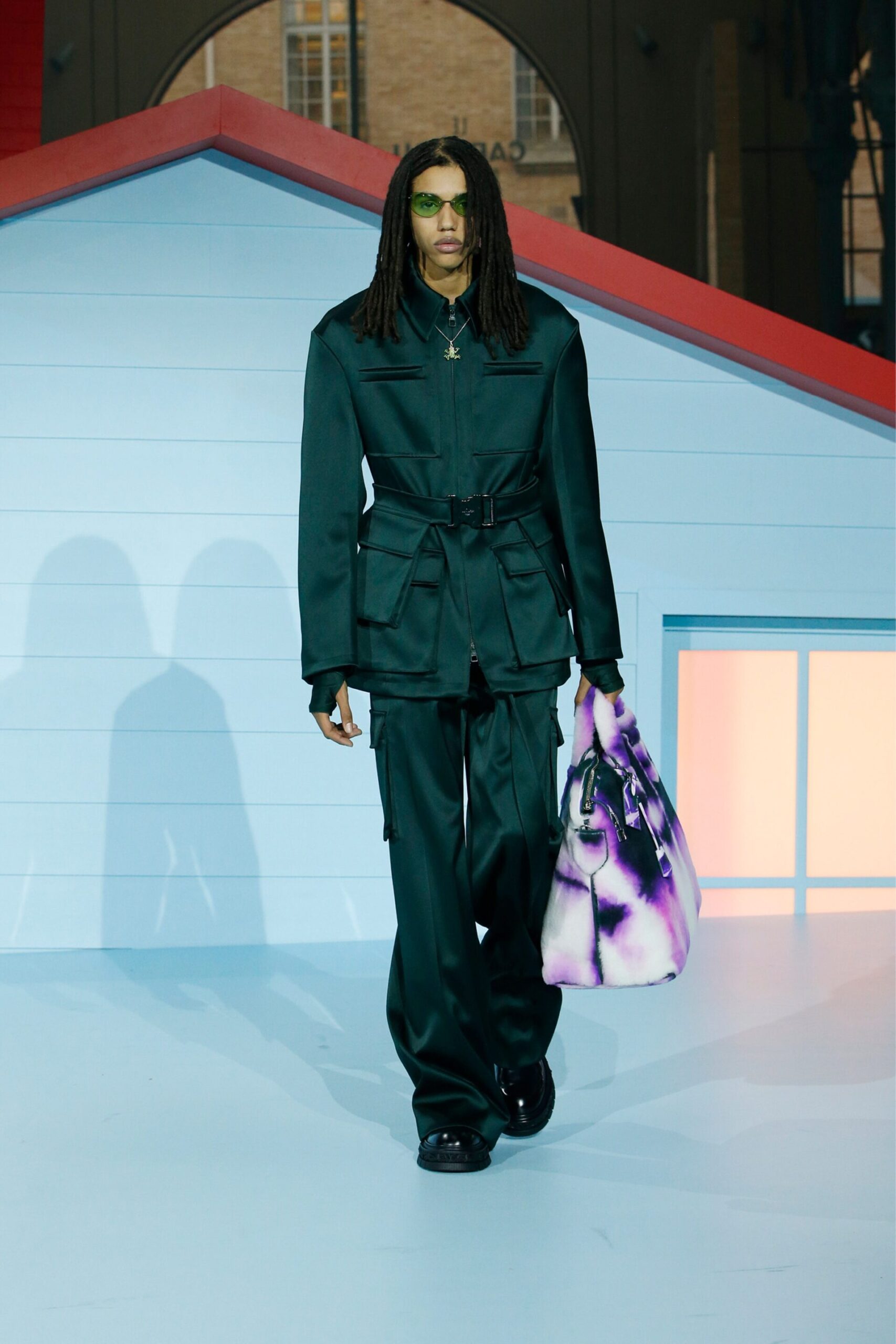 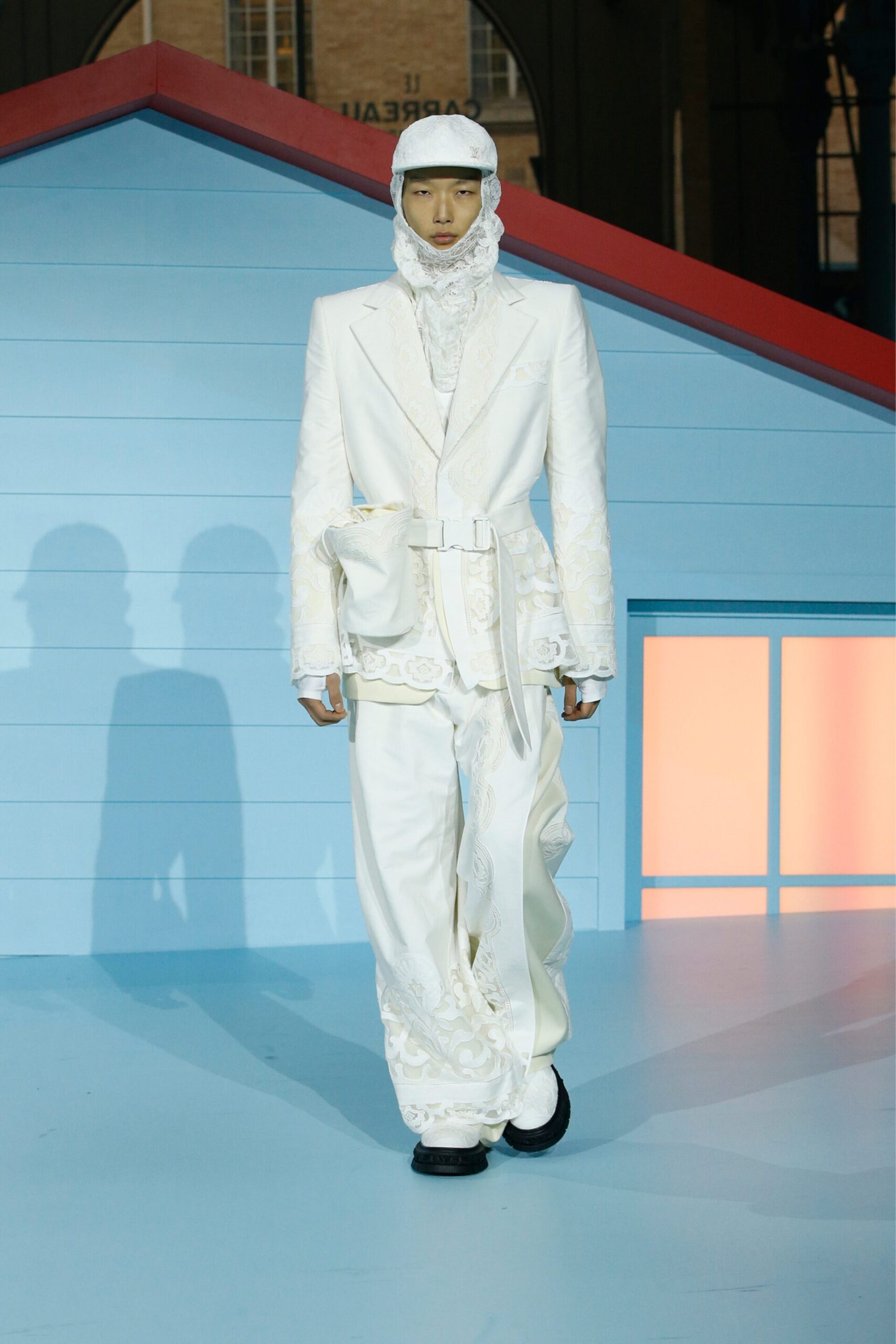 It’s been nine years since Glenn Martens graced his way into Y/Project and his latest unraveling was a beautiful summary of all the notes he’s been sewing. Taking place in a vast and impersonal warehouse space, models paraded down in all the codes that Martens has firmly established.

Asymmetry and scrunched-up silhouettes that have become akin to the brand were omnipresent across the 62 looks. Playful shapes, wavy coats, and deconstructed denim reinforced that ‘conventional’ does not have a place in the Y/Project lexicon. The brand’s strengths lie in its ability to take a familiar article of clothing and subvert it with contemporary renewal. Classic winter staples like the shearling jacket and the duvet puffer were given their own Glenn Martens twist (literally). Looks were then beautifully married to brightly-hued accessories (think pearl, fuchsia, lavender) and tabi-pointed shoes. Iconic 90s Gaultier prints were also reinterpreted in a Y/Project manner. This proved a clever segway to the designer’s Haute Couture Collection debut for Jean Paul Gaultier a few days after. Our favourite pieces? The green twisted handbag and the wonky shearling scarves. Vibrant, oversized and exaggerated. It seems like Martens’ aesthetic gambles are paying off and it’s safe to say we approve. 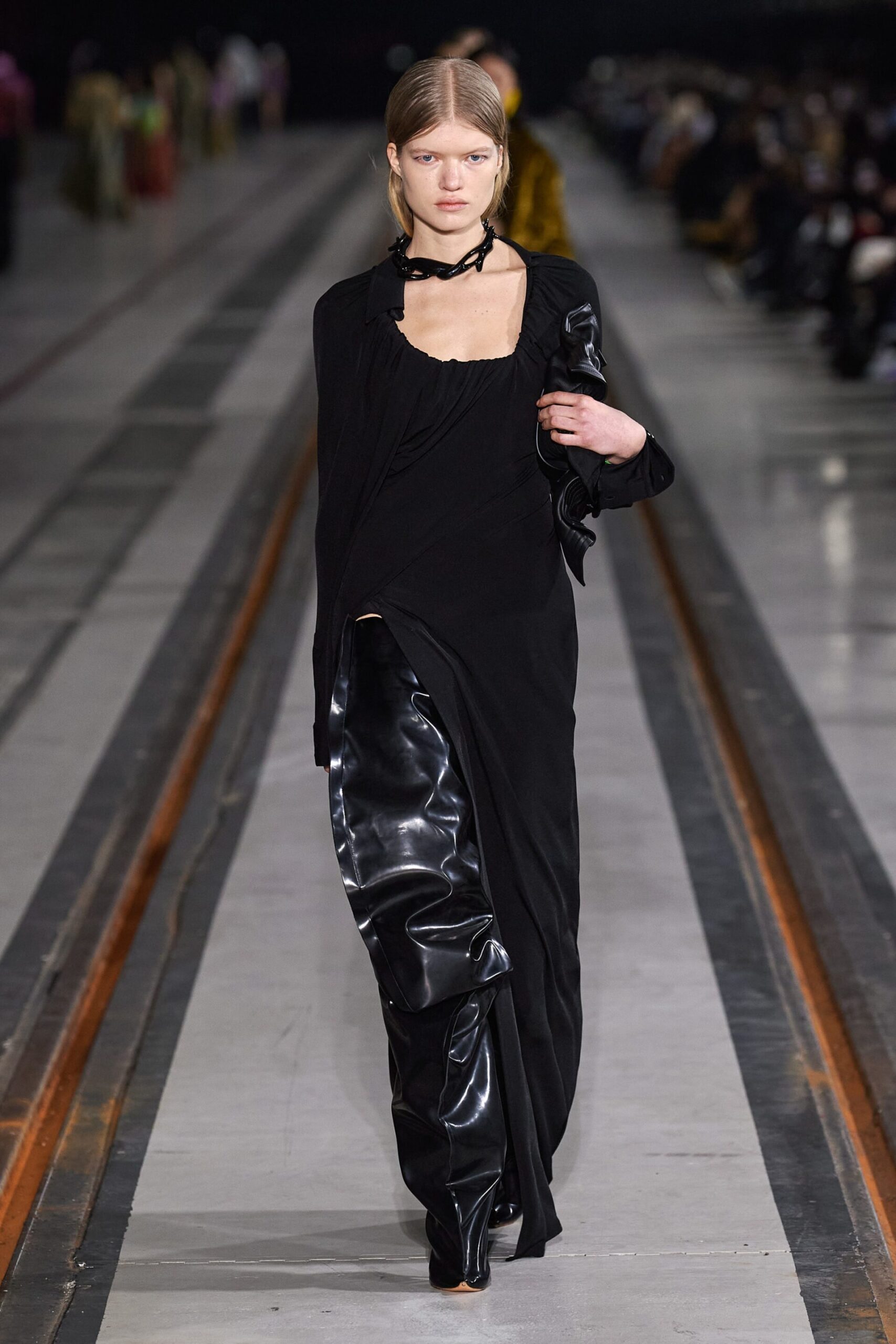 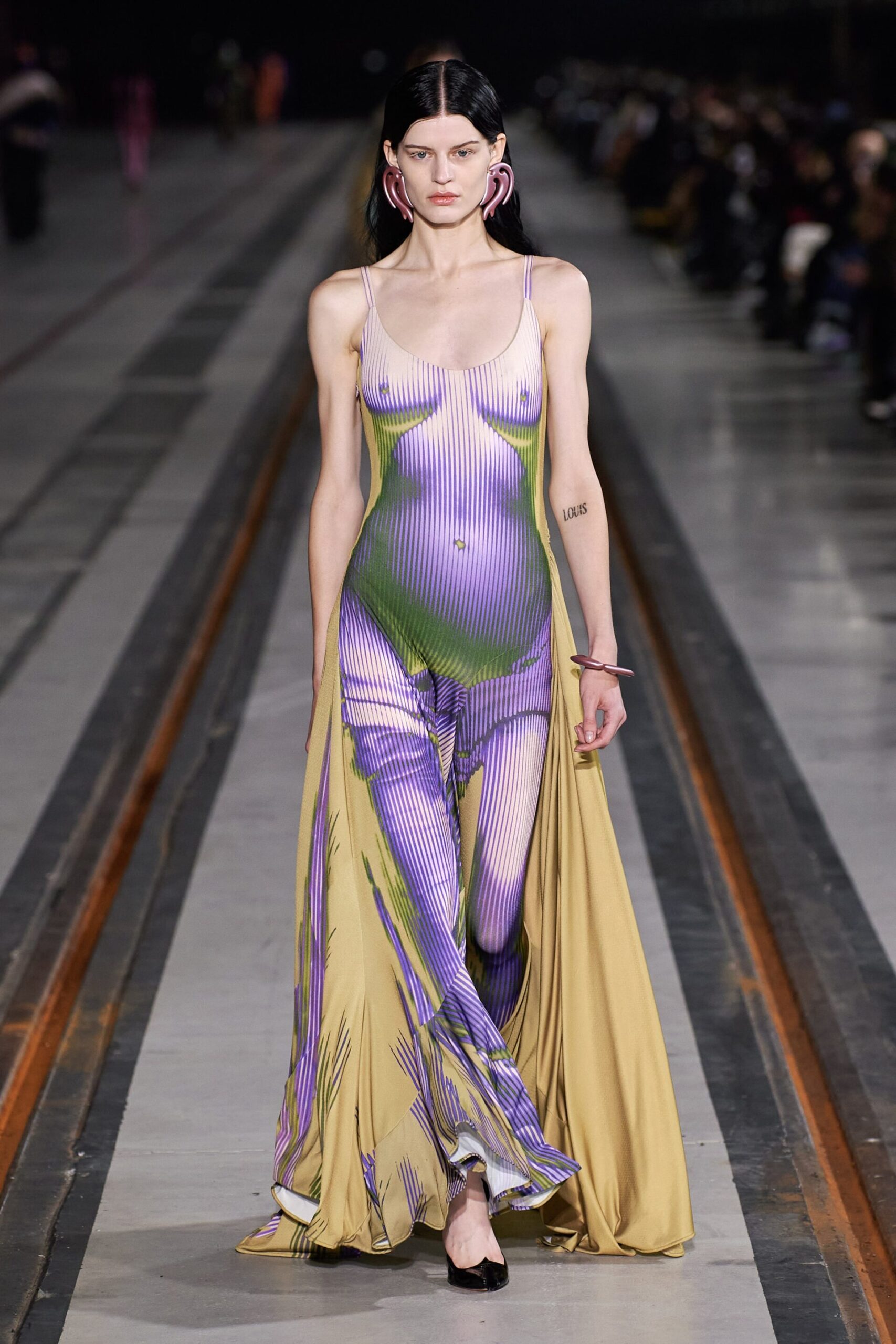 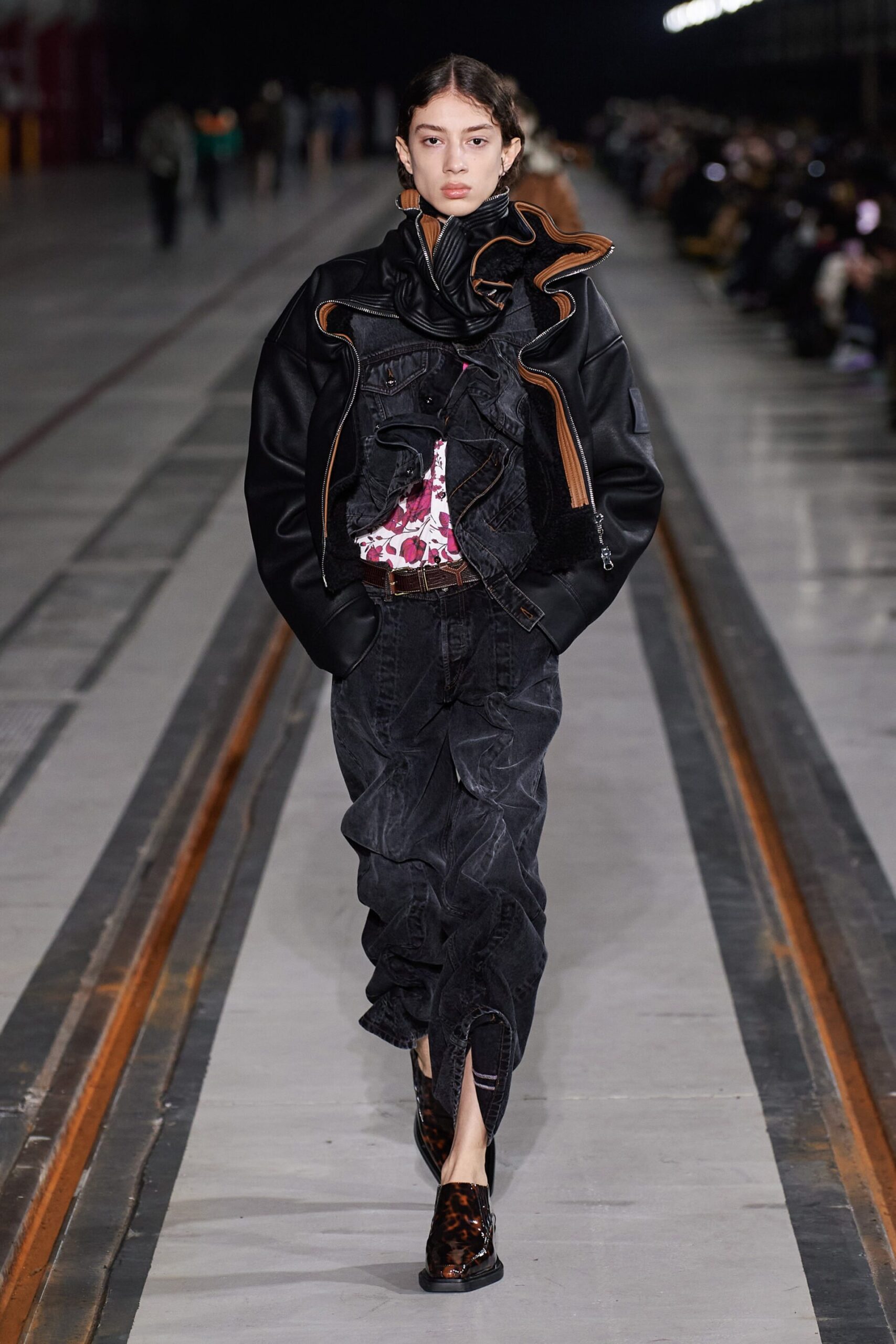