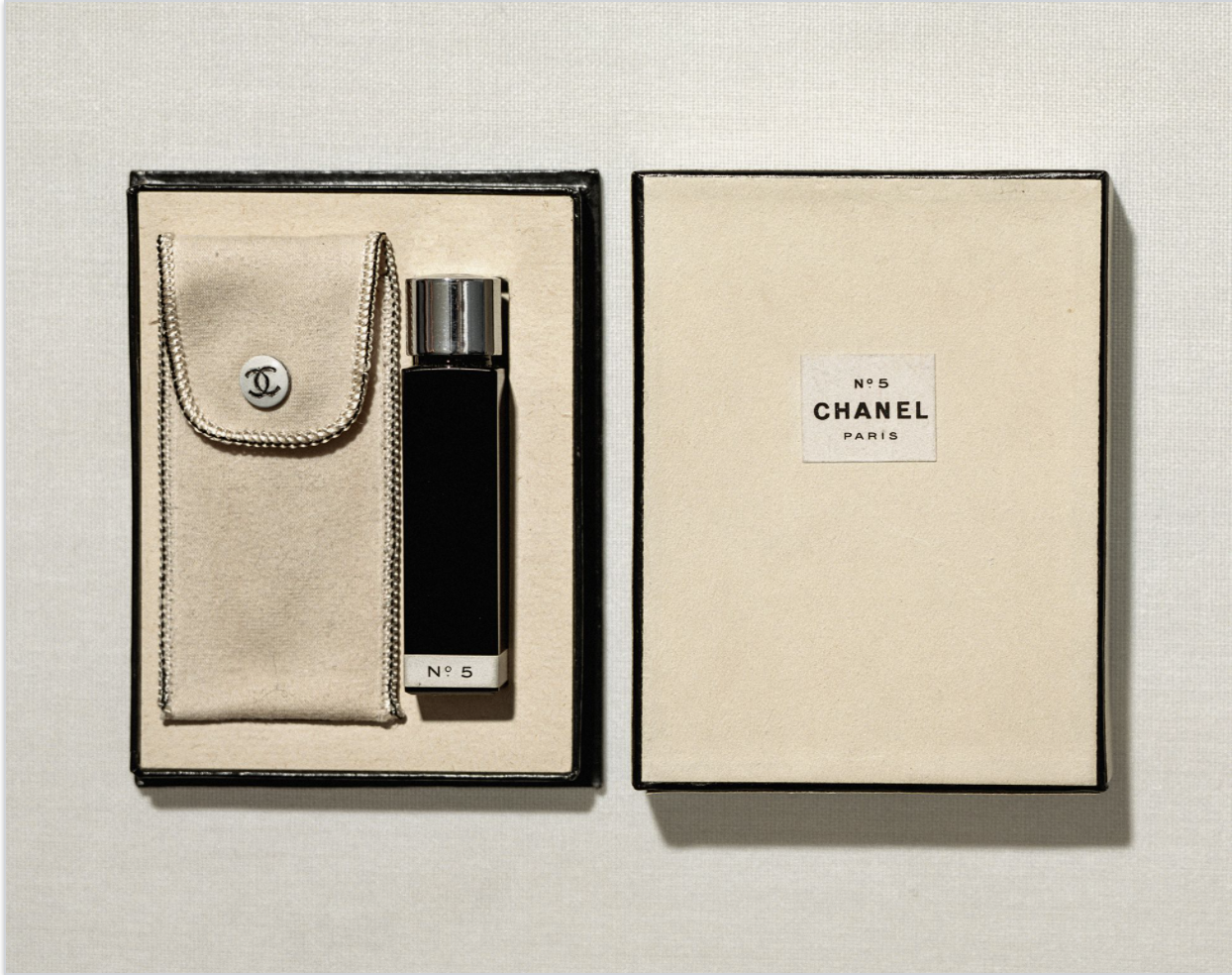 Here you have it. An extended glossary packed full of gems you need to know before sauntering into Gabrielle Chanel. Fashion Manifesto at National Gallery of Victoria, including exhibition highlights, an overview of the house’s iconic design codes, and exclusive insights from Danielle Whitfield, Curator of Fashion and Textiles at NGV. 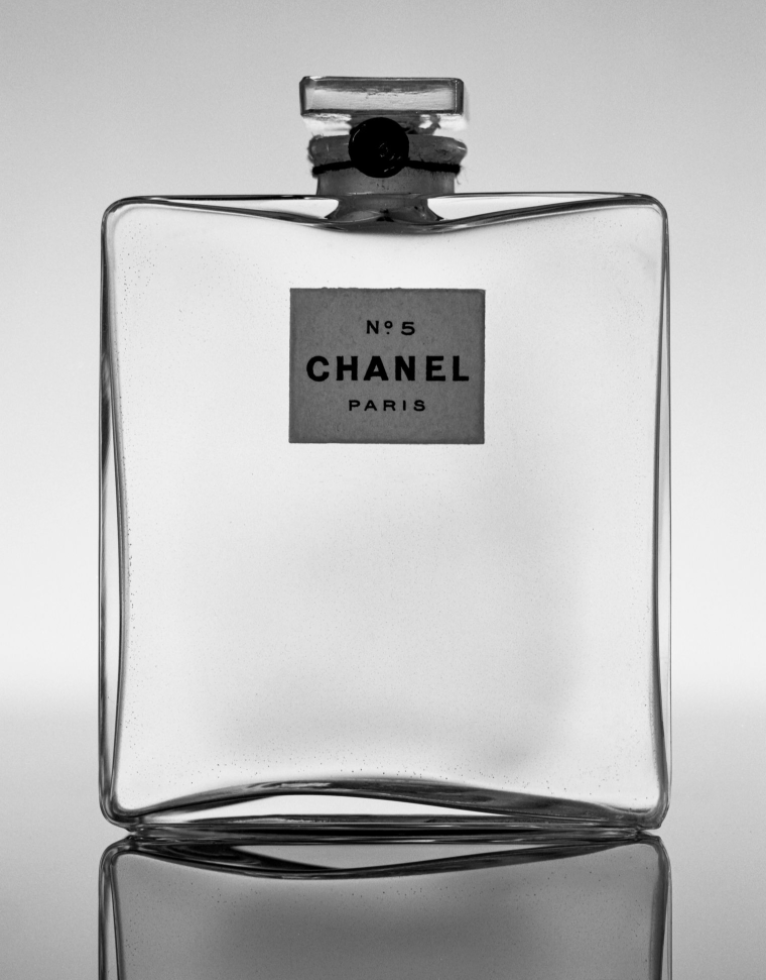 A synthetic compound and one of eighty notes in Gabrielle Chanel’s first parfum, CHANEL No 5. Created in 1921 with perfumer Ernest Beaux, the ‘abstract’ essence was an audacious departure from conventional 20th-century women’s scents.

Equally adored as a design object, observe the evolution of the fragrance’s clear square glass bottle and iconic white cardboard box within the exhibition’s gleaming department-store like enclave, outlining why the parfum was the modern woman’s invisible accessory. Note the CHANEL N°5 handbag perfume, designed by a modern woman, for a modern woman seeking a heady spritz of chic on the run. 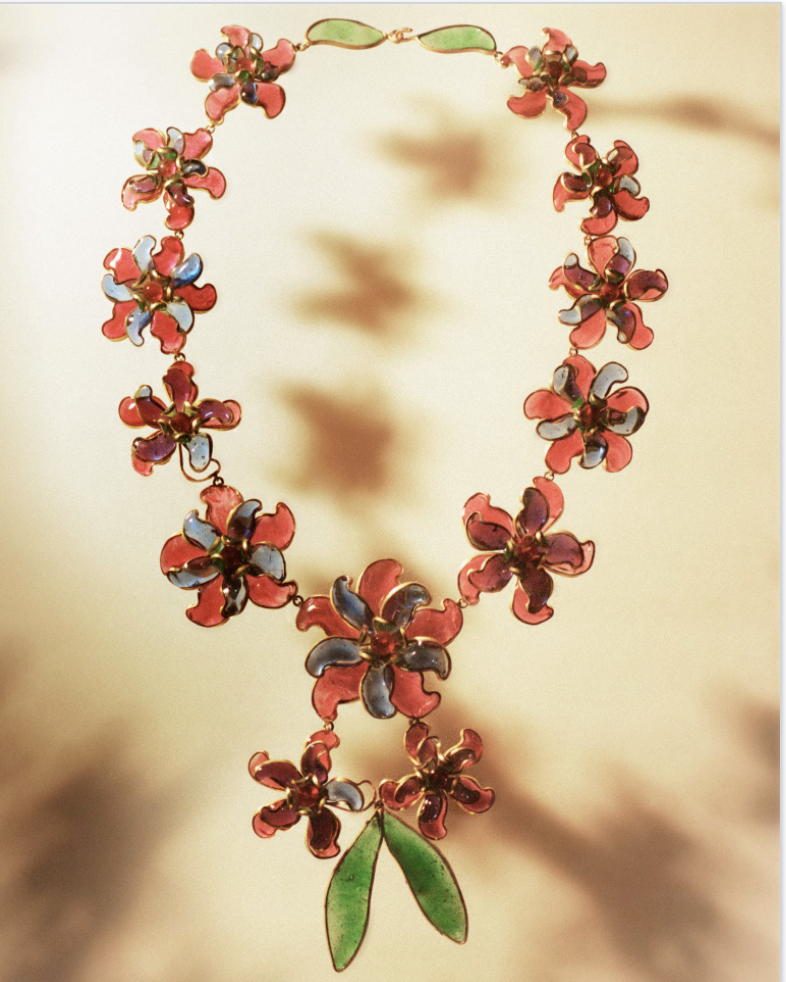 “I willingly cover myself in jewellery because on me they always look fake. The folly of wanting to dazzle makes me sick; a piece of jewellery should cause astonishment at most, not envy. It should remain an ornament and amusement,” said Gabrielle Chanel.

Chanel opened a costume jewellery department in her Paris couture house in 1924, with opulent designs brought to life by the hand of Comte Étienne de Beaumont. Inspired by forms and motifs from ancient Greece, Rome and Egypt, enter the exhibition’s ‘jewellery box’ featuring a display of precious and semi-precious stones hand-crafted into objets d’art that became the instant focal point of an outfit.

Introduced on garments as both a functional and decorative element, the gilt chain possessed distinct qualities of strength for Gabrielle Chanel. Structurally, it was attached to the hemline of the cardigan jacket and the classic post-war tweed suit, weighing down the fabric to achieve an elegant fall from the shoulder line down to the top of the hip. The chain also became part of the decorative and functional iconography of the CHANEL 2.55 handbag, enabling the wearer to sling it effortlessly over her shoulder and keep her hands free (without having to fret about it wearing like a normal leather strap).

“Chanel’s use of the gold gilded chain represents that recurring contrast between sobriety and ostentation. This is part of a paradox we see in the garments, costume jewellery and accessories; the simplicity of the garment beneath you know, the little black dress or whatever. The chain is also a symbolic reference to a sort of utilitarian practicality, and of course the value and the symbolism of gold in a women’s wardrobe,” says Danielle Whitfield. 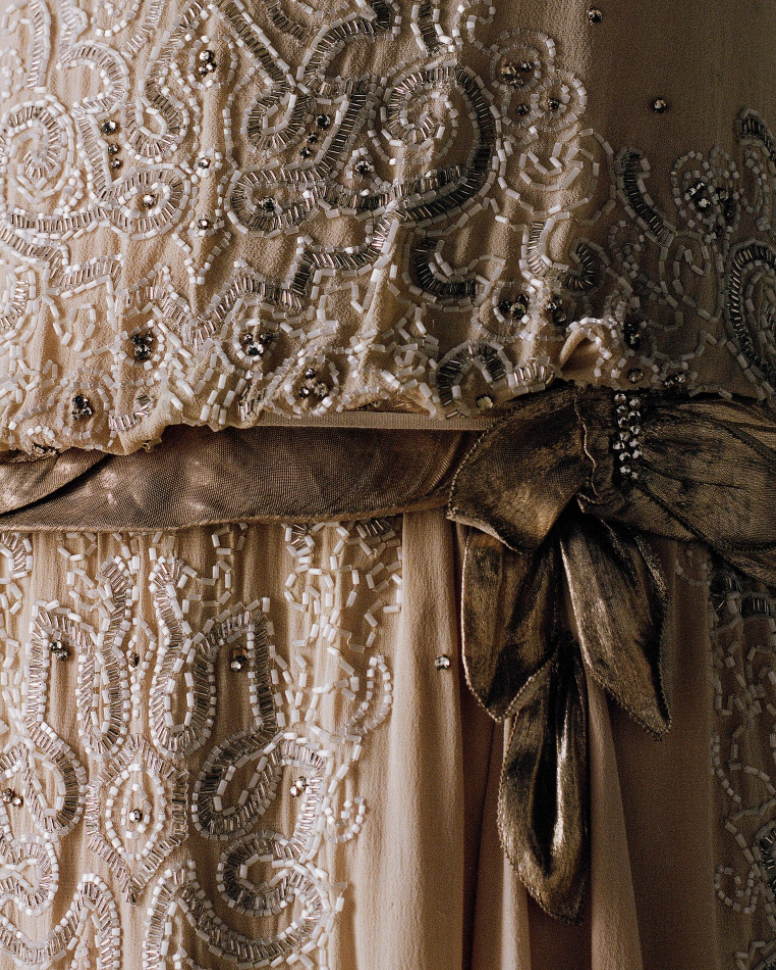 Stand in close proximity, and stare, and continue staring: 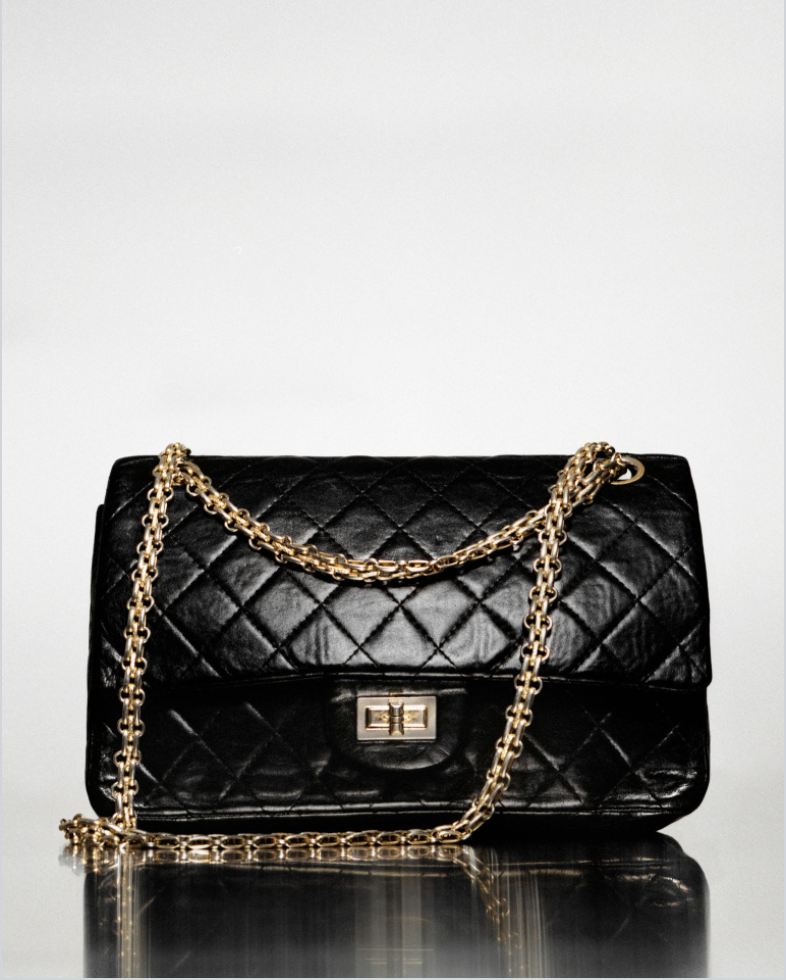 Classic, 2.55, Boy, Gabrielle…pick and mix, if you please. The versatility and refined elegance of a CHANEL garment means the designer set herself up for phenomenal success when the time came for the house’s foray into accessories. The CHANEL handbag remains the house’s most iconic accessory line to this day. 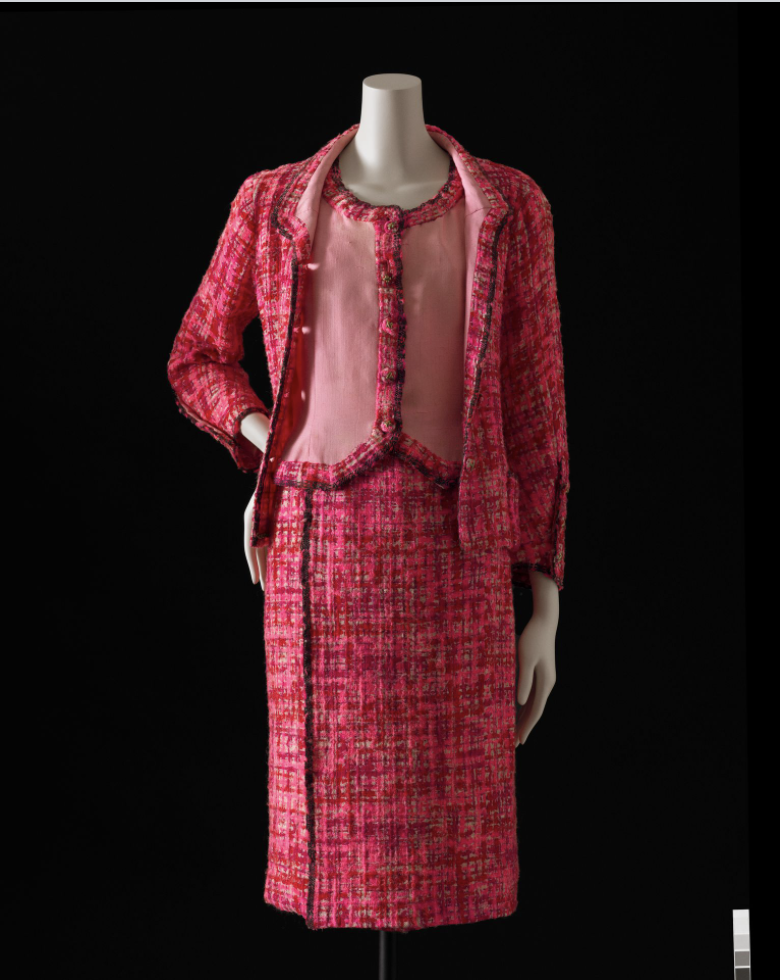 This stretchy, weft-knit fabrication widely used in sportswear through the 1920s is reinvigorated in CHANEL jackets, cardigans, and twinsets. Imagine ditching stiff, scratchy laces and snuggling into a fabric that works with your body instead of against it.

Philanthropist, art and fashion connoisseur, Legion d’Honneur recipient – enough said! Mrs Campbell-Pretty has graciously supported the NGV in expanding their Chanel holdings over the years, including a more recent acquisition of a the ‘hotly-contested-at-auction’ red velvet evening cape with a marabou feather interior. Also keep your eyes peeled for a romantique white organdie embroidered evening dress from spring–summer 1933, and a frosty pink silk Jersey slip over blouse at the beginning of the exhibition, both of which Krystyna has also supported the NGV in acquiring. 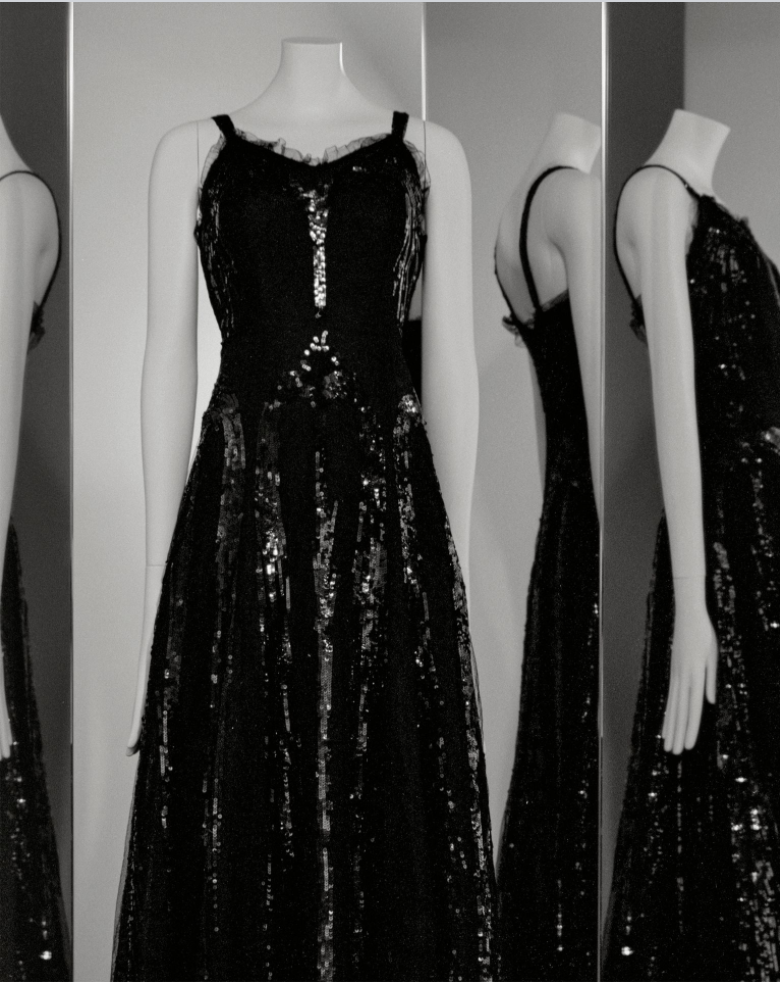 Aucune explication necessaire – no explanation needed. We all own one, we all own six, and we can thank Gabrielle Chanel for championing the use of black as a hallmark of modernity and universal elegance in the Little Black Dress. Note an alluring organza cloqué dress from spring–summer 1964, and a silk chiffon cocktail dress spring–summer 1959.

Chanel was a milliner before she was a fashion designer, you well know. She opened her first millinery store – Chanel Modes – at 21 rue Cambon in 1910. Her sleek, minimalist approach to millinery foregrounded her work as a fashion designer, a ‘less is more’ ethos permeating her streamlined, utilitarian silhouettes seen throughout the exhibition. 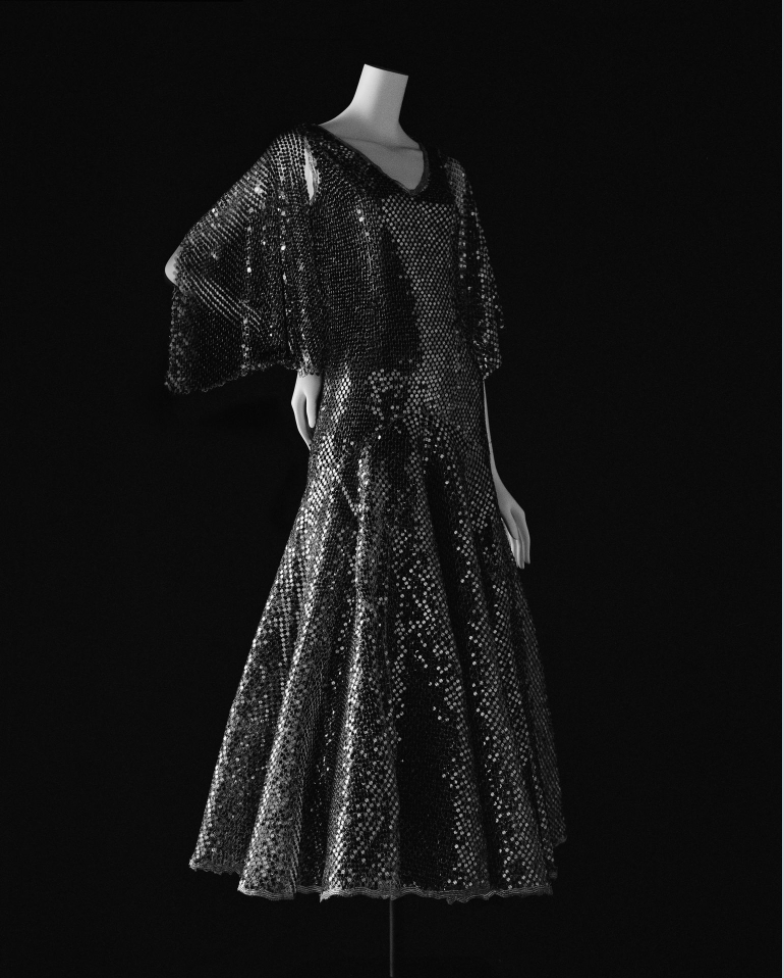 Bonne year, bonne news. Gabrielle Chanel opens a couture house at 31, rue Cambon in Paris. The iconic address still occupies a ground floor boutique and a series of private salon and reception rooms in which the designer mesmerised clients with haute couture presentations. An immersive photographic treat awaits visitors at the end of the exhibition, where one can see themselves reflected in Chanel’s mirrored staircase, hips confidently thrust forward and body weight on the back heel. Granted, that Chanel stance is exponentially harder to achieve than she made it look.

….Is only desirable when contrasted against restraint. A feathered flourish here, a glinting ruby there, and perhaps even the inclination to take one thing off before you leave the house. Ostentation avec moderation, as seen in a gilt metal Crucifix pendant made for the designer by Robert Goossens (autumn–winter 1965–66), the ideal companion to a demure black or cream tweed CHANEL suit. 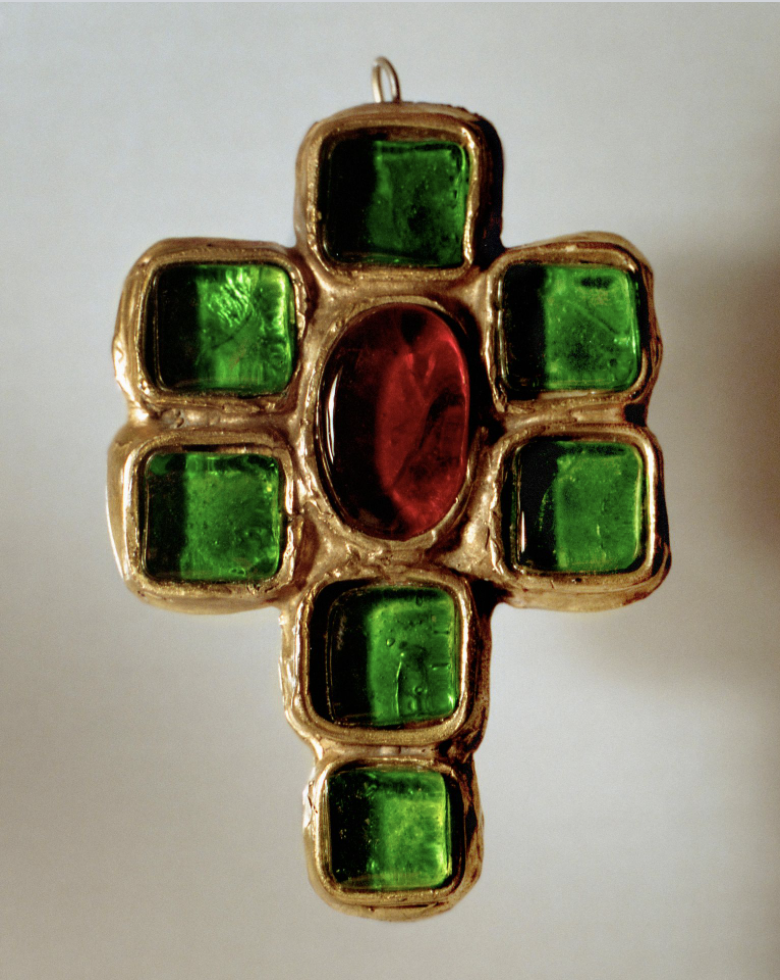 Making its international debut in Melbourne following Paris’s 2020 showcase, the exhibition showcases more than 230 garments, accessories and jewellery pieces from Palais Galleria’s holdings and the Patrimoine de CHANEL in Paris.

“Gabrielle Chanel devoted her long life to creating, perfecting, and promoting a new kind of elegance based on freedom of movement, a natural, relaxed attitude, a subtle elegance free from extravagance, a timeless style for a new kind of woman. This was her fashion manifesto…,” says Miren Arzalluz, Director Palais Galliera.

“Red is the colour of life, of blood, I love red,” said Gabrielle Chanel.

Radical and ravishing, Chanel’s affinity with the colour was not just seen in garments, but also as a hero accent in accessories and cosmetics.  The house’s first cosmetics line – Le Rouge Collection N°1 – was inspired by the visceral colour and its various shades. Behold a pulsating rouge-rush in an alluring silk tulle dress (spring–summer 1955), and a fiery silk chiffon evening dress from the same year. 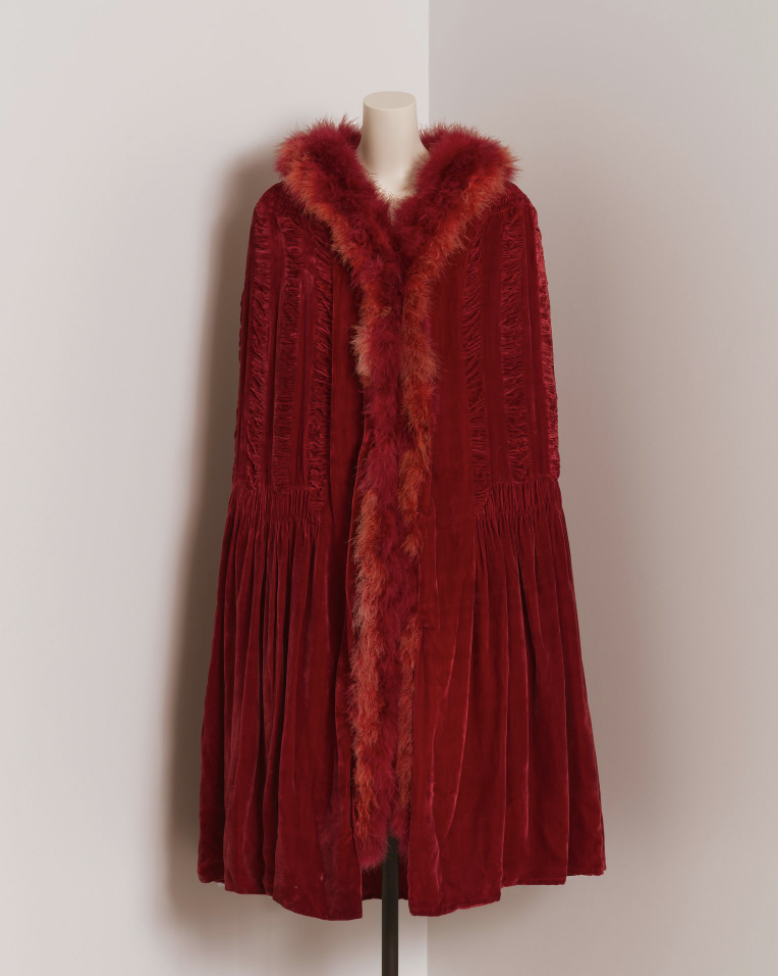 A section of the exhibition exploring Chanel’s philosophy of understated luxury that informed her design ethos throughout her career. Stark luxury considers a reserved austerity in design and dressing, exploring tensions between the garment and the wearer.  In reaction to overtly feminised and ostentatious styles of the 20s, the designer championed restraint through streamlined silhouettes and monochrome palettes, which she elevated into the realm of Haute Couture through intricate beading and embroidery techniques. This is witnessed in a black silk guipure lace dress with a silk organza flower from spring–summer 1925, and a net and sequin embroidered evening dress from autumn–winter 1930. 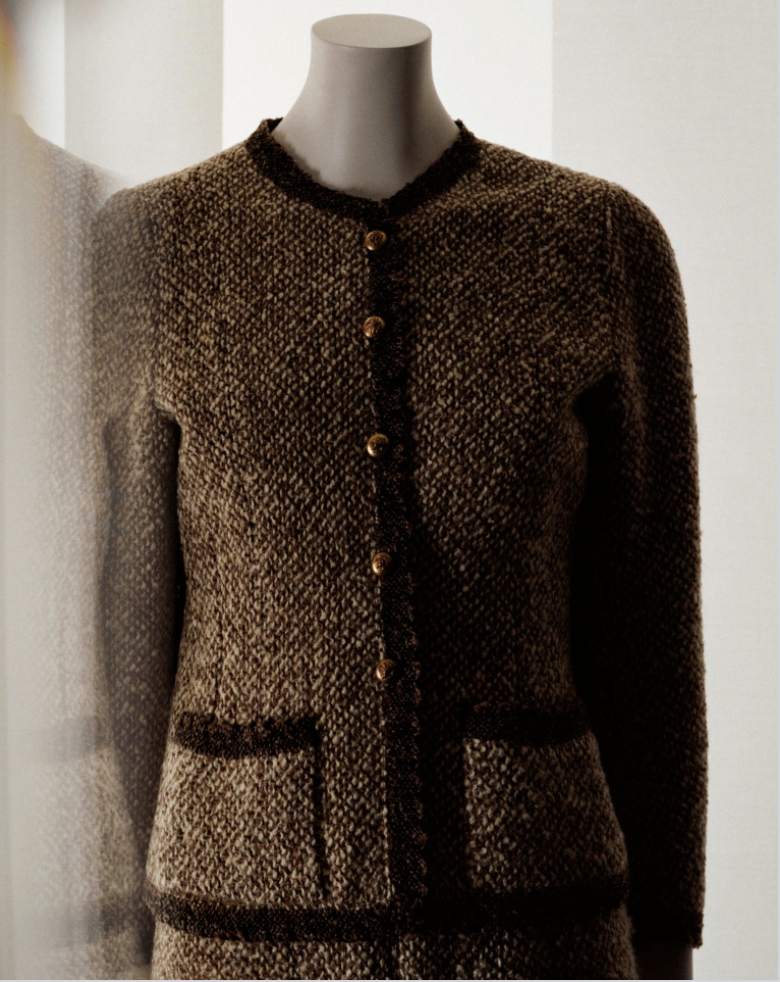 Two-piece suit, two-piece cute. The designer first introduced the cult classic to the house in the 1920s, the ideal balance of comfort, elegance, and functionality. Inspired by the silhouettes and fabrications of men’s sportwear, Gabrielle Chanel feminised the suit by pioneering new material applications including painted wool-tweed and jersey in charming pastel tones. A 21st century wardrobe staple, the exhibition showcases a tantalising line-up of the house’s signature collarless jacket and snug skirt ensemble, including a tangy fuchsia suit comprising a jacket, skirt and blouse constructed from overpainted wool and raw silk with gold metal hardware (1966).

Darling, your pockets are there for a reason, use them wisely.

“Iconic images of the designer capture her standing outside her shop in Deauville under the awning, with her hands plunged into her pockets, and she carries this stance throughout her life even, even into her 70s when she was photographed by Cecil Beaton wearing a tweed suit, her hands are in her pockets,” says Danielle Whitfield.

“It comes back to the functionality of her garments; they were designed in a way that was useful for active women.”

“We always begin by making the dresses of dreams. Then we have to cut, trim and remove, never add.” – Gabrielle Chanel 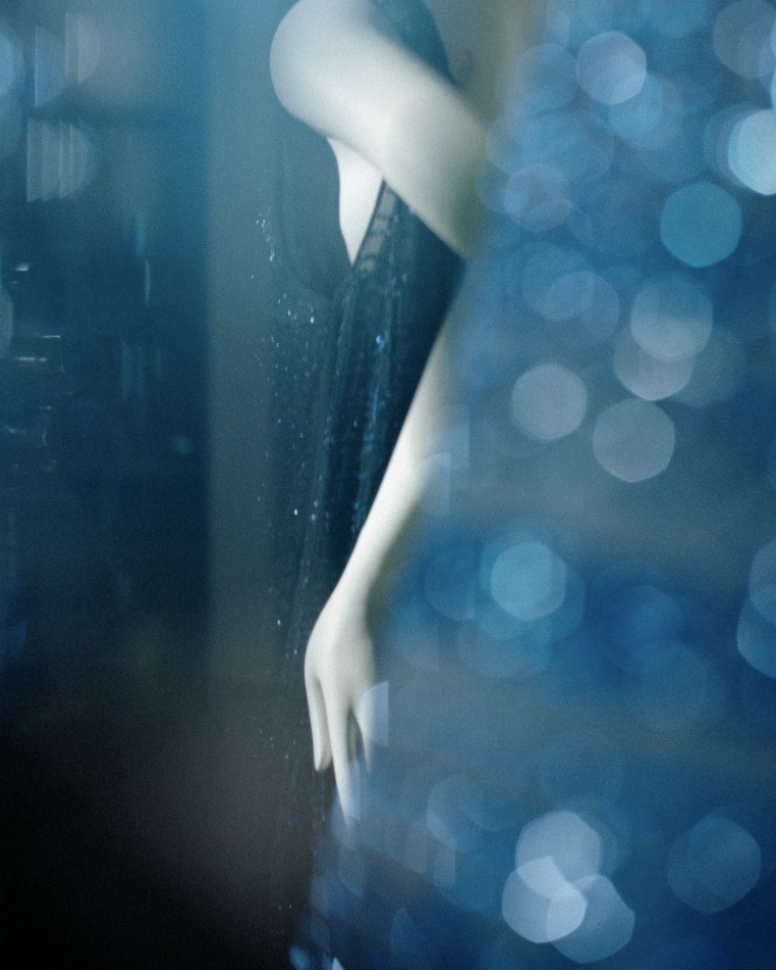 Wool became très cool in the 20s when Gabrielle Chanel defined new parameters for how the natural fibre was applied in a fashion context. Inspired by its use in men’s sportswear, wool jersey joined wool tweed to became house hallmarks. The latter construction is witnessed in a spectrum of shades and textures in the exhibition’s suit display, created from a process in which raw wool is dyed, dried, then blended in an industrial mixer to create the variegated hues and textures required for each constriction. See it heroed in a 1930 wool jacquard knit with silk pongee lining, and the aforementioned line-up of tweed suits.

Stand in close proximity, and stare, and continue staring:

…plus a series of wistful watercolour fashion illustrations by French artist Christian Bérard produced in 1937-1938. 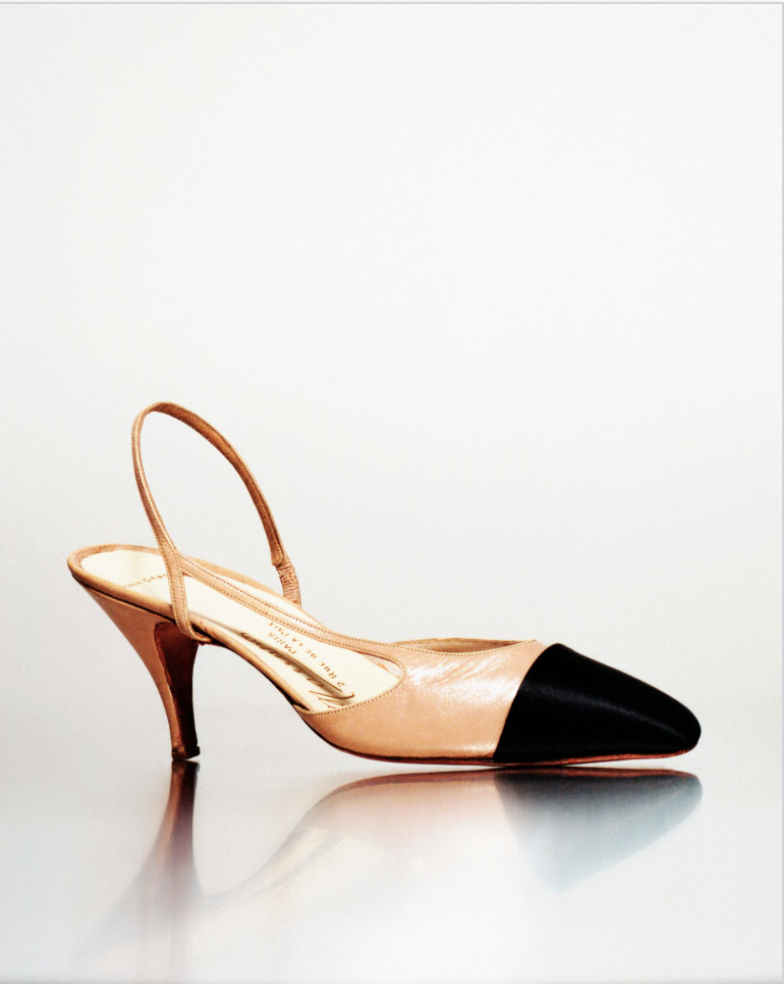 Put simply, when a woman is comfortable in her clothes, she is comfortable in her skin, and in this state, she can be her authentic self. ‘Youth’ in the context of Chanel’s work does not necessarily connote age. Rather, it captures her application of soft tailoring, lightweight fabrics, and simplified lines to emphasise the wearer’s spontaneous, energetic, and liberated spirit. 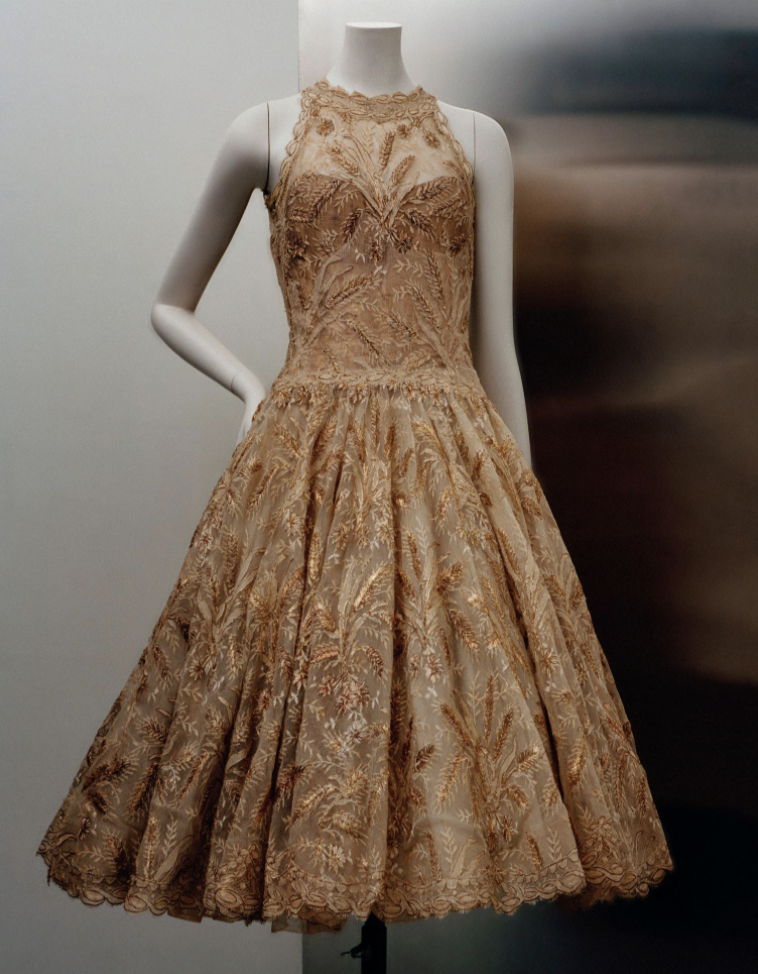 “Gabrielle Chanel can be described as a zealot in many ways. She was definitely somebody who had a vision for fashion. Her approach to life and work was based on these very clear principles,” says Danielle Whitfield.

Indeed, the word ‘zealous’ often, and fittingly, courts the ‘manifesto’ phrase. With this mind, we start to understand the extent of Gabrielle Chanel’s self-assurance and the determination of the designer, milliner, mistress, avant-garde, pioneer, woman …(et al.) to realise a more liberated and vigorous future of fashion.