Jason Phu on Exhibition ‘Analects of Kung Phu’ at ACMI

to Be sat down with artist Jason Phu to discuss the cinematic representation of Chinese and Asiatic cultures through an intricate martial arts lens, and his strategic curation of these filmic excerpts in a three-channel video work now showing at ACMI, titled Analects of Kung Phu.

to Be: How does Analects of Kung Phu explore the idea of reclaiming and recontextualising proverbs and sayings from history and popular culture? In what ways is this present in your work more generally?

JP: My idea for a lot of my artworks comes from this idea of copying the conceptual and creative processes behind existing works from Chinese culture. If we take Chinese painting for example – ink on rice paper – traditionally how you learned and developed your own skills over time was to copy paintings that had been created by older generations. The idea of copying and using something older is very traditional in itself. I feel like sometimes young contemporary artists have this idea that they need to create something completely unique, and yet, I feel like uniqueness comes from tradition. 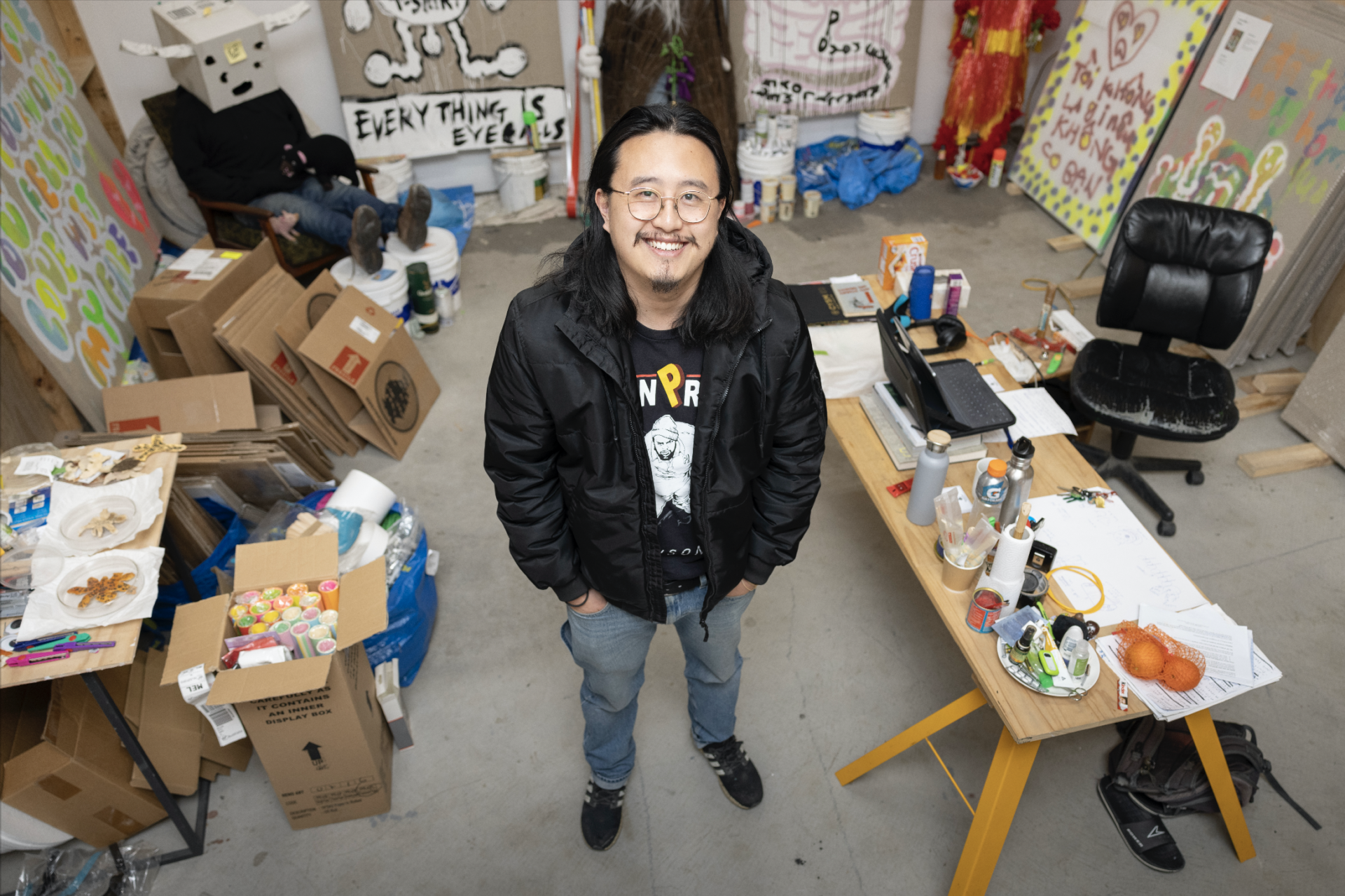 Were you specifically motivated to explore the idea of misrepresentation of Chinese and Asiatic cultures in this work?

What I did explore more specifically in this project is the idea that translations and subtitles for films are generally pretty wrong. I don’t think most viewers understand the process of translating texts for films, and that the translation is also often given to an independent third party who really don’t have anything to do with the film itself. It’s a tough job.

As a fluent Mandarin and English speaker, I know there are just some words that would take a whole essay to translate because they contain untranslatable emotions and cultural nuances. Language is so contextual as well. Inevitably there are always going to be mistranslations, but then sometimes it’s just really bad. I’m sure a few of us have experienced getting a dodgy DVD that has the wrong movie translations. But sometimes the translations are so bad, they’re the opposite of the meaning of the movie. Also, religious texts – say, the authorship of the Bible or the Analects by Confucius – have been compiled by multiple people and reinterpreted throughout history.

How does the piece use the idea of ‘flawed’ cinematic representations to explore a broader issue of cultural misrepresentation?

I’m viewing the films in this work through the lens of cultural traditions, regardless of whether or not they’re considered ‘flawed’. A lot of Chinese traditions come from flawed cultural leaders and things that were of a time. No culture has a flawless track record. I guess ‘reclaiming’ these visual cultures reflects the idea that we’re using existing resources that we can shape and mould ourselves, and we don’t need to create something entirely new. All these wise sayings already existed, and I didn’t need to come up with a new life philosophy.

It’s not a bad thing, but the rise of self-help and personal empowerment material has seen the emergence of these new leaders in society that ascertain a sort of cult personality. In contrast to this, I see myself as largely irrelevant in the process of this work coming together, I’m just taking bits and pieces out of different films that already exist. I’m not claiming to create something new; I’m curating the visual material. 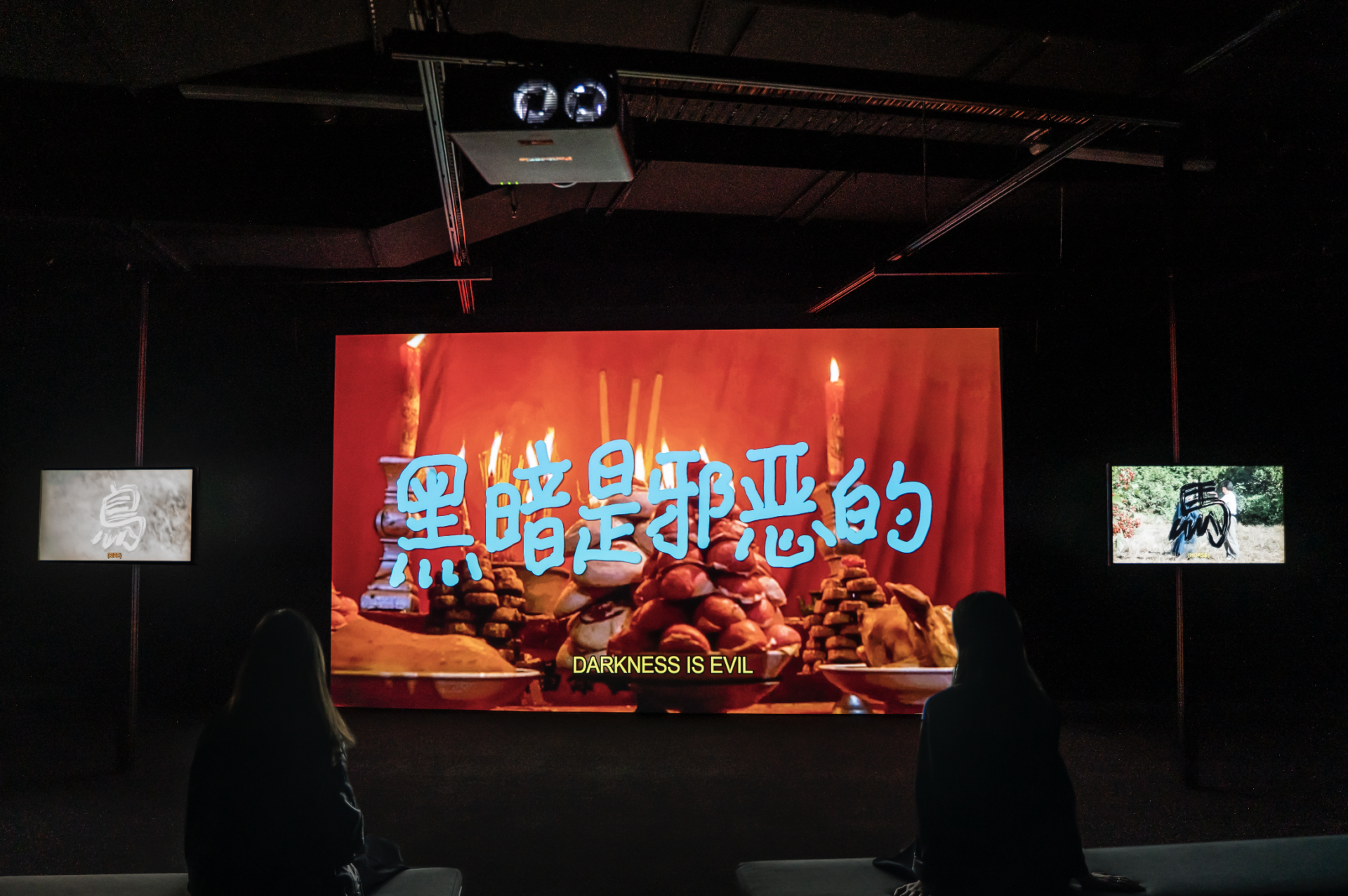 In what ways could this work reference the idea of self-help resources or ‘a guide to life’?

I think we all understand now that therapy isn’t just for people with mental health issues. Checking in on ourselves is something we should be doing constantly. This is a philosophy at the core of Chinese medicine, which is about constantly healing your mind and body. People often wait until they become physically or mentally unwell before they take time to heal themselves.

So, for me, the ‘guide to life’ is just an everyday guide. It’s like saying, ‘eat your veggies every day’, instead of ‘eat some ginger and vitamin C tablets when you’re sick’. The idea that the little things do really matter isn’t unique to Chinese culture either. Many cultures value the idea of making small efforts each day to improve one’s physical and mental wellbeing,  rather than trying to fix the big things that come along and overwhelm you unexpectedly.

What role do you think social media, particularly Instagram, has in falsifying information about Chinese and Asiatic cultures?

They’re like the perfect package, and there’s nothing wrong on the surface with the kind of messages these affirmations mean to people. But I do see how the West has, to some degree, bastardised Buddhism, and even Taoism through the overuse or misrepresentation of its teachings. Certain sayings are taken out of context, or parts are actually removed altogether. Sure, there’s nothing wrong with extracting little bits and pieces (which is exactly what I’m doing in this work), but I think it’s about understanding the greater context of proverbs and sayings, and how they fit into a broader cultural narrative. All our teachings are about learning rather than conclusions.

This work draws heavily on references to martial arts and Kung Fu films. Does it have the same impact on viewers who are not at all familiar with those film genres?

I’m hoping the work reaches people on a few different levels. Firstly, I just assume most people did grow up with some sort of exposure to King Fu films, or if they didn’t, they are familiar with the format. I didn’t want this work to be about me taking ownership of Kung Fu films or Chinese culture. Anyone could really make this work. Obviously, someone from a Chinese background would have a lot more insight into this genre, but that’s not to say people from other cultural backgrounds can’t create their own genres and cinematic styles

On another level, I’d love for people to discover films they weren’t familiar with through this work. I personally discovered a lot of films that I’d never seen before. I’m hoping to publish the list of films I used on my website, so people can have access to them. This work does also flesh out the conversation around the Orientalisation and problematic mysticism found in Kung Fu films. A lot of what is found in the films is actually true to the culture, but I try to encourage viewers to consider what has been emphasised or made more elaborate for cinema. 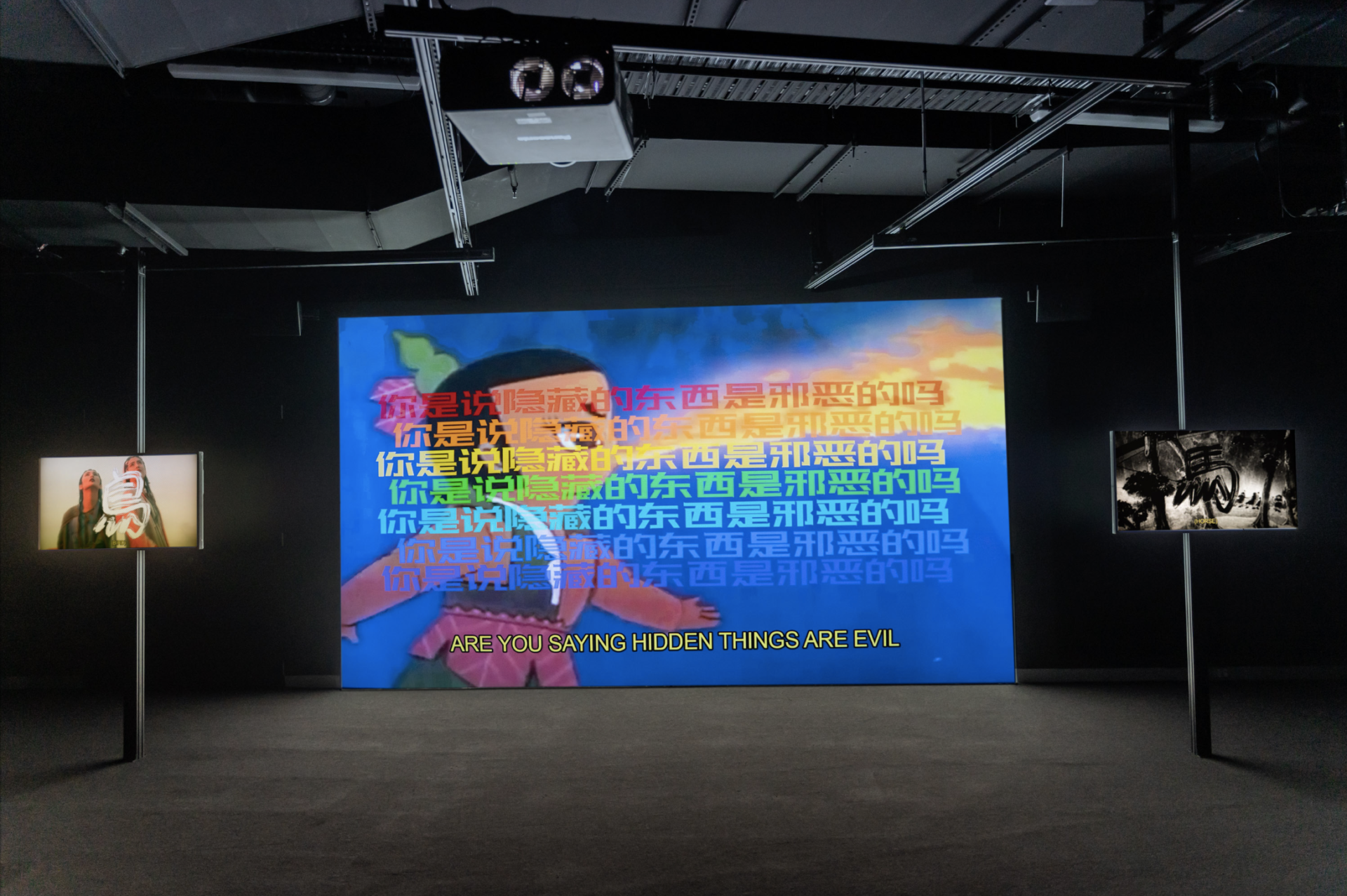 Analects of Kung Phu is a visually and conceptually layered piece, what did your research and development process look like in curating this work?

I grew up with Kung Fu films, especially Kung Fu wuxia, which is like the superhero genre of ancient China. These stories are pseudo-historical and do often contain bits of history, but they include people with more powers. I remember it was a big thing when Crouching Tiger Hidden Dragon came out in 2000, and a lot of American audiences thought it was great, but they couldn’t work out why people were flying in it. The characters were flying in the same way as they would in a Marvel film. That’s the genre of wuxia were flying, for example, is part of someone’s superpower, or they’re able to sort of stop a sword with their hand or something.

I’ve also drawn from genres that heavily reference Kung Fu films or Western films which reference Kung Fu, along with some Japanese anime references. I mostly picked films I already knew, and I was also talking a lot to friends and family, and typing keywords into Google, like ‘top 200 Kung Fu films of all time’. There are a couple of films in the piece which my Mum and Dad grew up with. My Mum did a bit of Chinese Opera growing up, so I thought that would be interesting to use some footage of. Chinese Opera usually has acrobatics or sword fighting, or martial arts as part of a visual showcase.

How has your multi-disciplinary art background enriched the outcome of this work in a formal context?

I love working in new and diverse mediums. For me, it’s just like learning a new language. I did also work with someone who understands the whole video editing process better than me for this project. I feel like this approach comes with my background in printmaking. Custom printing is a very established field, and you often get a certain quality output because the master printer has the accumulated skill. In this process, I worked with a really great editor, Conor Bateman. His editing skills are like an art form in itself. I could have learned the video editing process and completed it myself, but it would have probably taken me three years. 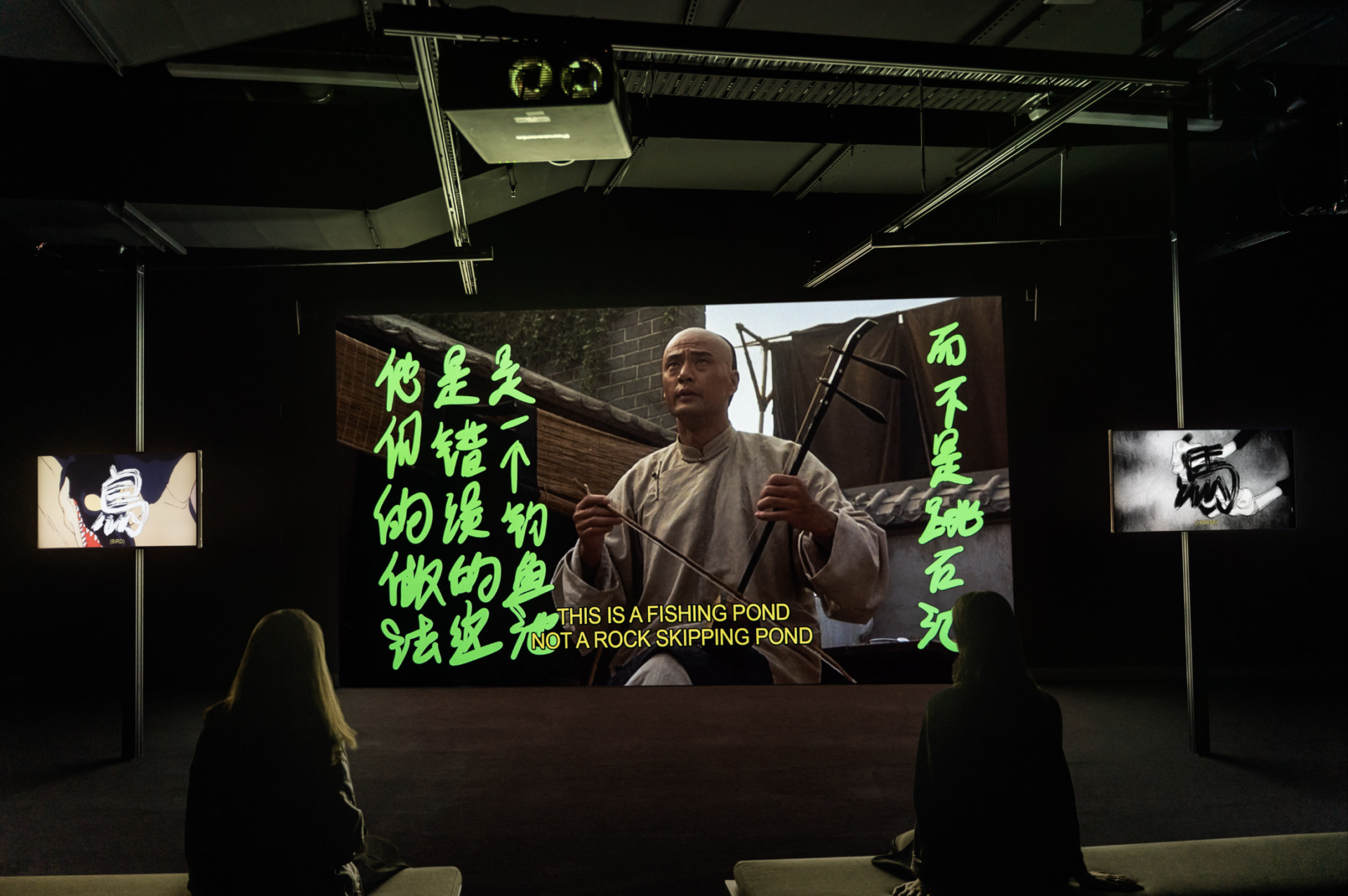 What is your favourite ‘saying’ or life mantra?

This actually might be a Japanese saying, it goes something like: ‘Take little things seriously, and big things with absurdity.’ I just feel that’s more important than ever today as we’re constantly overwhelmed with social media and news articles about things happening around the world. In my interpretation, it doesn’t mean we should ignore global problems, but it isn’t helpful to the problems and us to be overwhelmed by them. It’s more important than ever to concentrate on the little things, and the things in front of us in order to implement bigger change.

How do you hope this work will resonate with viewers from diverse cultural and social backgrounds?

I hope this work is less about my reflections and more about the viewer’s interpretations. I hope it will allow people to question things they’ve been following and seeing online. I hope it will inspire people to compile their own little montage or life guide resource. I feel like social media’s engagement with video content means everyone is filmmaking now, and the popularity of Tik Tok means people are literally making little films every day. We all have social media, we are all photographers in a way, so and that means we have the ability to change, mould and reinterpret our perception of life for better or worse.

Analects of Kung Fu is now showing at ACMI