Idolatry and anthropomorphism are familiar concepts for Ramesh Mario Nithiyendran, who has historically explored the symbiosis of his heritage and contemporary culture, often packing its conceptual robustness into equally robust, sculptural animations. 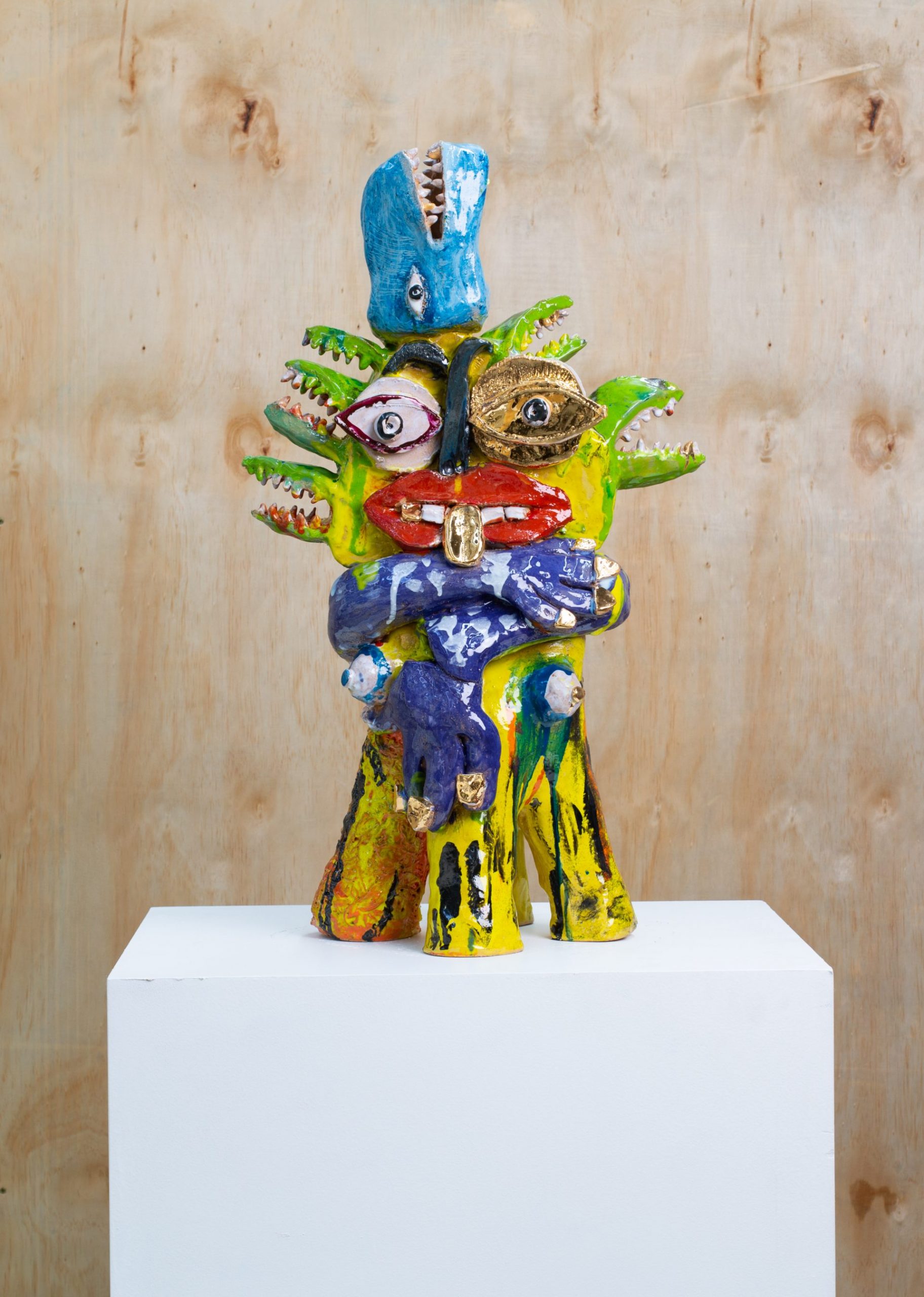 The life-size shock-factor figures parade as both traditional in research-heavy ritualism, yet modern in colour palette and flamboyance. These recurring themes are sentimentally attached to Nithiyendran’s name now, almost fortifying a symbiosis of its own—vivaciousness and the artist.

Stumbling across Nithiyendran’s exhibition at the Ian Potter Museum of Art in 2017, titled Ramesh Nithiyendran: In the beginning, one couldn’t help but to be intrigued. It was reminiscent of the social and sub-cultural taglines a group of idling adolescents rambled about at a bar, but then somehow it leapt out of their mouths and into a few rooms.

The encapsulation of contemporary subcultures, sociopolitics and anthropomorphism was amalgamated, then doused onto walls, ceramics, plinths and in turn, refined into digestible tangibles. 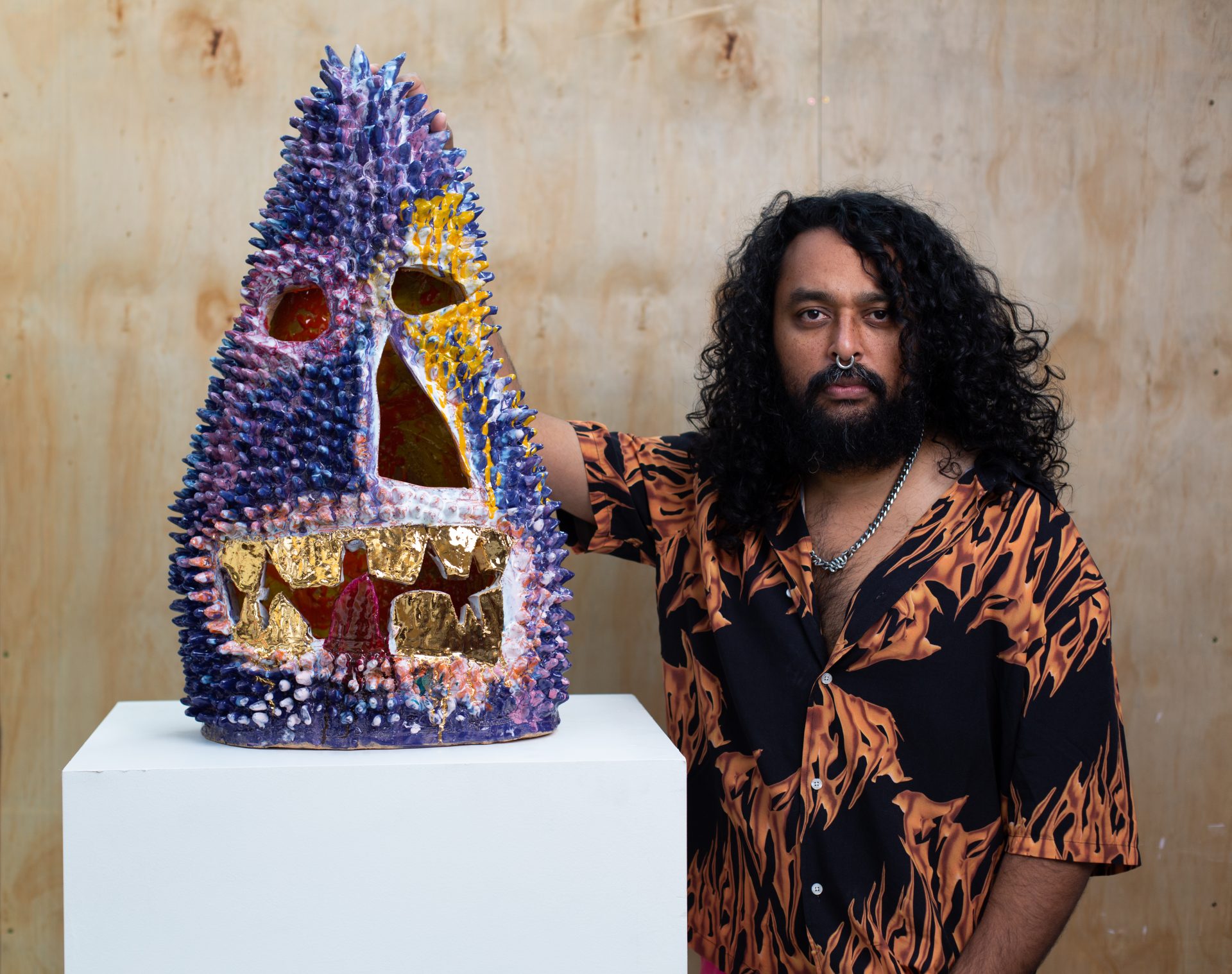 It was a display of worlds colliding—the old and the new. Contorted figures manifested through the traditional understandings and research of gods and idols and were then plagued with these juxtaposed backdrops that fought their way through the room. The ‘RAMSDEEP’—‘street things’ like graffiti.

There were familiar colours that young adults presuppose commonality and relatability to. I saw my peers wearing these colours often, and in the same fashion the artist politely collided them in. I saw my shoes, my clothes and my hats in Nithiyendran’s walls. I saw it in the intricacies of variegated splatters of paint in nooks of the figures’ details. 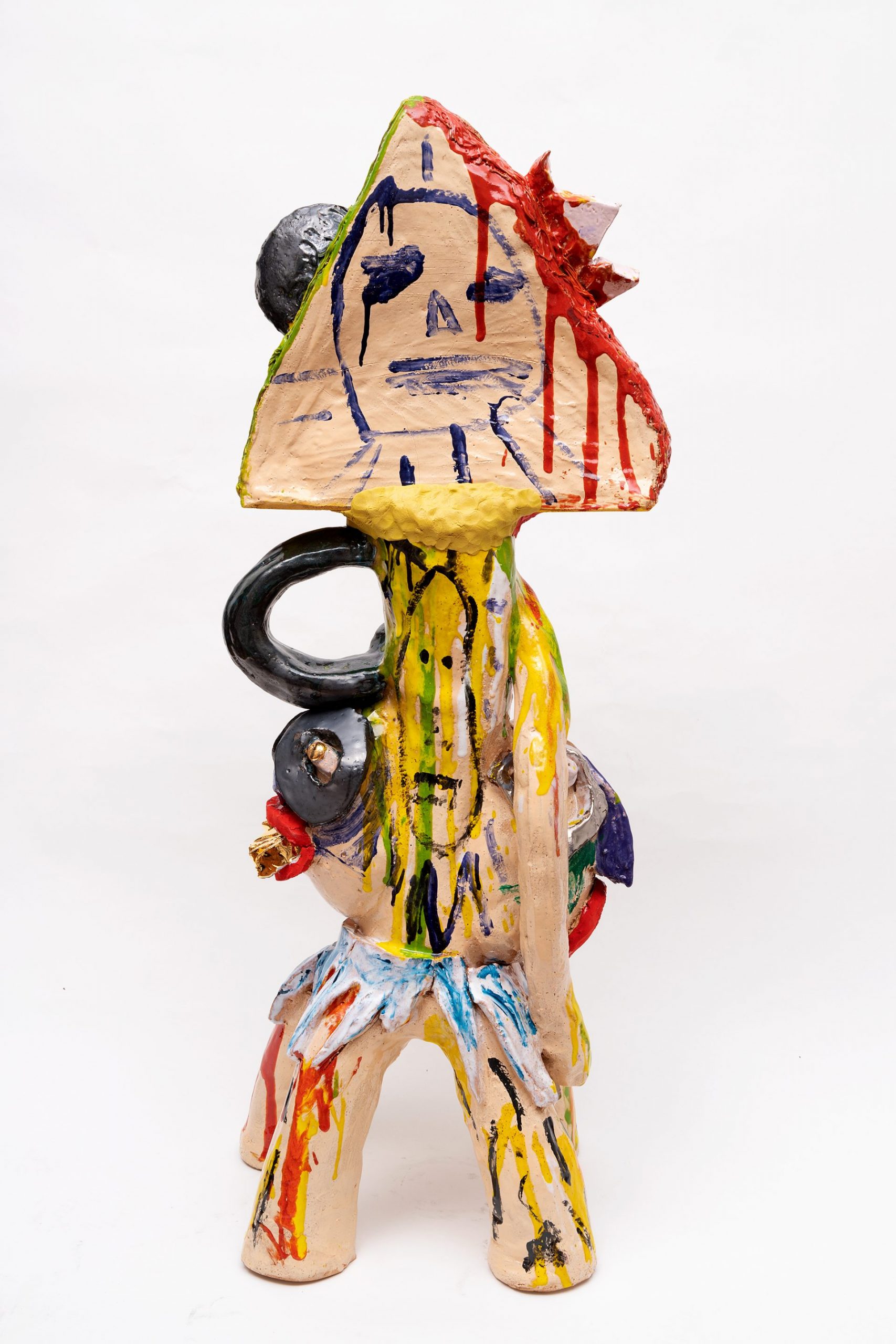 Had I unpacked and then re-wrapped this train of thought, I would see that room again. And perhaps, that’s what makes Ramesh Mario Nithiyendran such a terrifyingly brilliant artist. Try to then encapsulate that and communicate it in writing, and (as one can clearly see) I’m having quite a difficult time.

Another layer of geniality—Ramesh Mario Nithiyendran chose a set of mediums so pointed to visual and tangible narratives, that writing about them is almost impossible. There is a lot to be dug out of his work, and not enough time nor a vast enough vocabulary to precisely impart it. But nevertheless, I’ll continue trying…

Nithiyendran’s work acts as both ‘titillating and gritty’. Again, this grit is poured over with pink and its titillation swelling beneath mischievous grins of ratty, zig-zagged teeth of figures that bob along with your line of sight. Again, again, again—It’s a sultry depiction of Nithiyendran’s brain and whatever seemingly leaves his hands, eventuates into this palpable display of scintillation, provocation and hairiness. 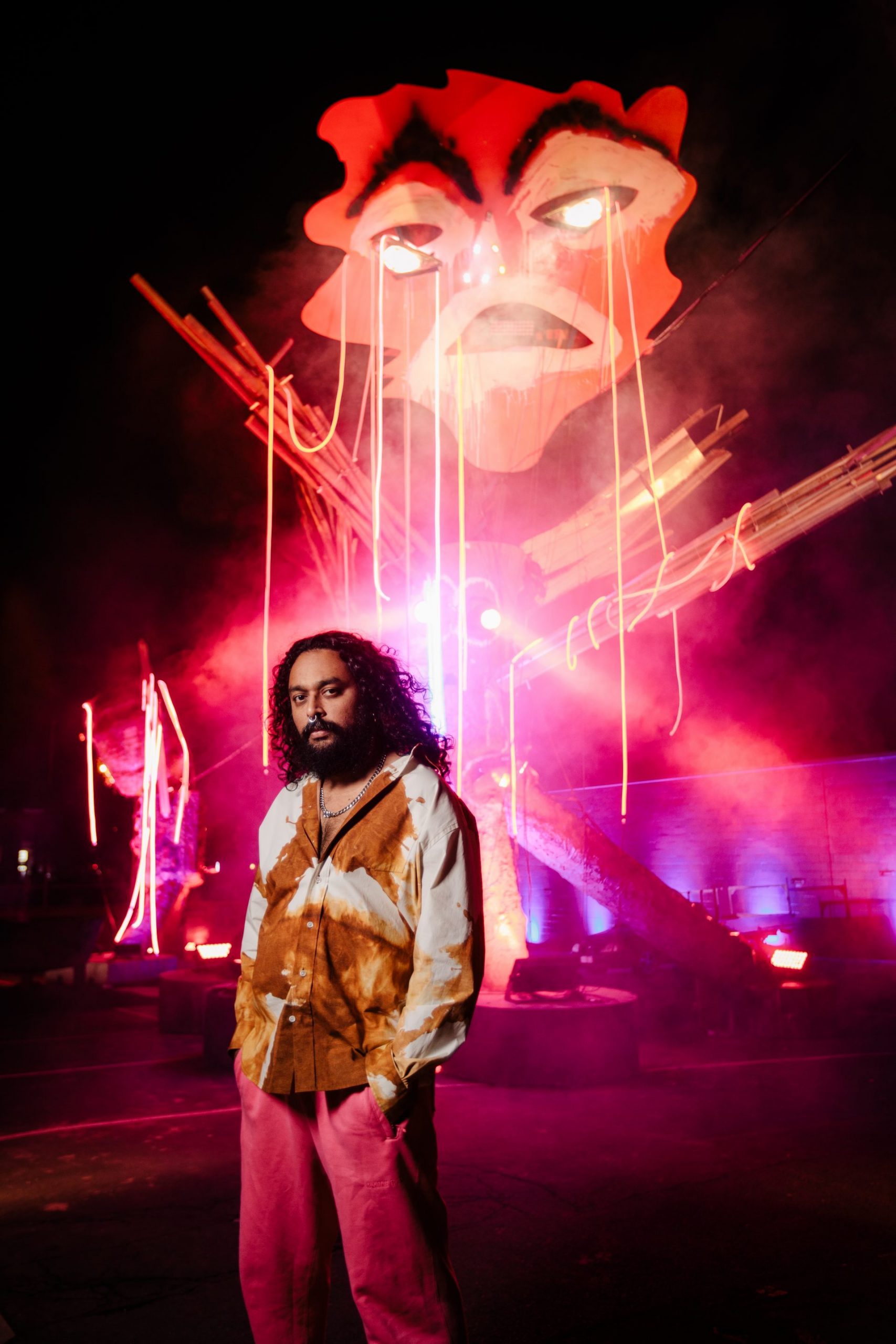 Let’s move on from 2017—We see the displays of the artist warp, contort, evolve, and adapt to the now, year of 2021. Of course, the artist’s career stems farther back, to 2014 roughly, and perhaps even earlier. But no matter the amount of time lapsed, Nithiyendran never ceases to prompt his audience toward a familiar figure and all that it encapsulates—religion, solitude, purity, divinity, exclusion, inclusion. Gods and idols, beckoning the mortification to be both rejected and appealed to. Wrapped in a sheath of porous technical capacity and glazing, unkeen to the eye, and only after the fact, to be admired upon closer inspection.

The subject matter, in Nithiyendran’s case, need not explanatory plaques scattered across a gallery, it’s all right there—In the subtlety of familiarity. What familiarity? Topical religious and political illusions and the prompts to question it in a 21st century setting? Pretty much.

We can arrive at the assumption the artist’s four-week long “major exhibition”, according to Sullivan+Strumpf, will expand on Nithiyendran’s surrealistic and mythological fascination. 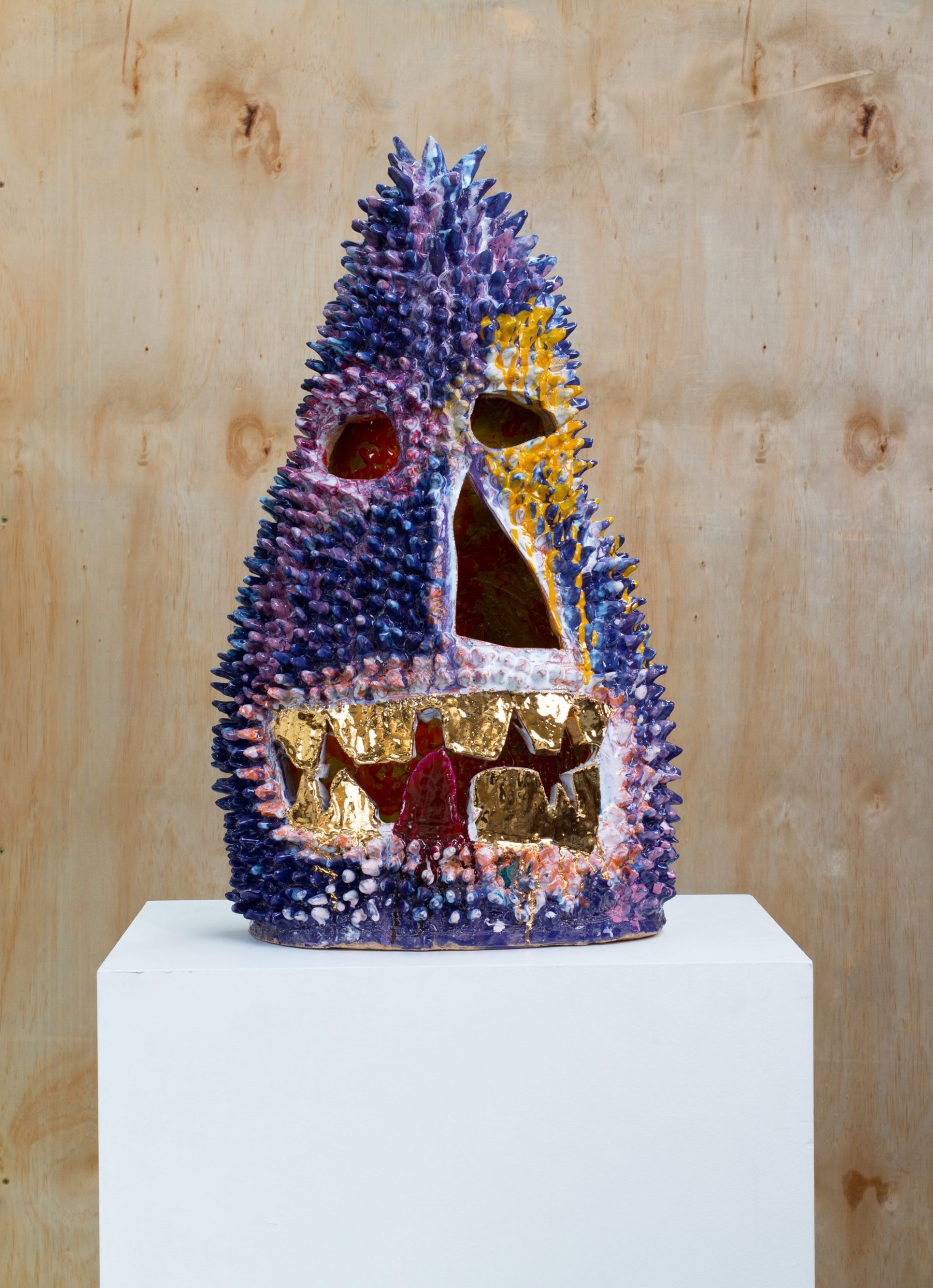 Importantly, the write up for Nithiyendran’s latest exhibition at the Zetland gallery, will “reflect the artist’s fascination with emoji’s, zoology and queer imagery,” continues Sullivan+Strumpf. It’s interesting to note the application of “allusions” to both emojis and “Japanese Nio guardians to Hindu Dvarapala door gate guardians”. Probably the most interesting part of the exhibition is how these parallel one another.

“The [Guardian] figures’ allusions to ideas around regeneration, renewal and even collapse are particularly pertinent in our current global climate defined by social, environmental and public health shifts/upheaval,” says Ramesh Mario Nithiyendran. Much of this quote is applicable as to the concepts Nithiyendran is foreplaying.

Much like his work—refined and spattered—his concepts play in and out of bounds too. Sullivan+Strumpf brave his press release with a series of concepts to be explored in the exhibition which is seemingly muddled between; contemporary culture; idolatry; “ritiualistic icons designed to protect from evil;” growing up in Australia; the coexistence of Hindu, Christian and Buddhist cultures in Sri-Lanka and his heritage. 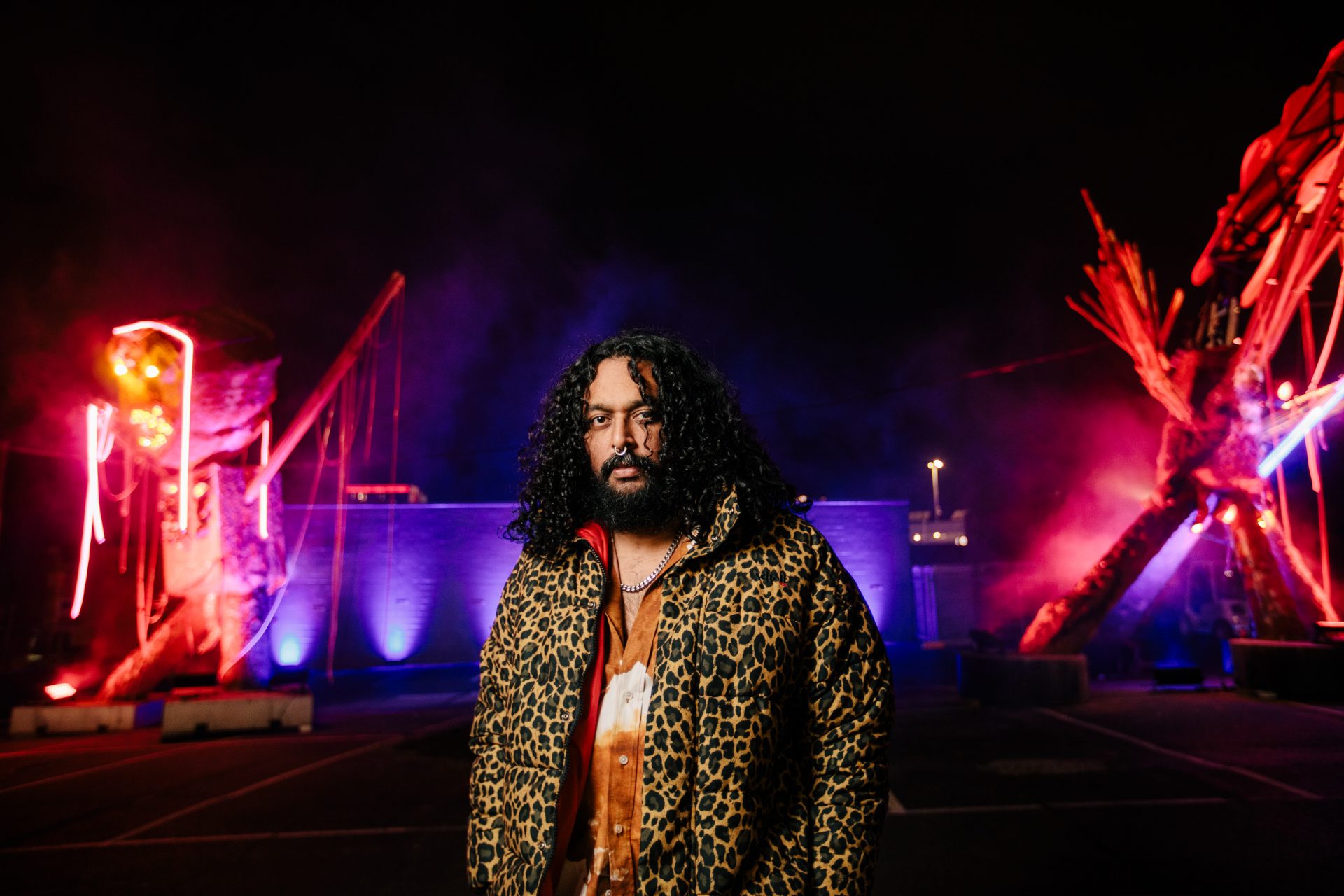 I certainly understand its muddle. Because what seems muddled, is really just the execution of one billion concepts packed in a poignant display of artistry beyond yours and I’s ability to dream.

I learnt that in 2017, and I no doubt will learn that, once again, between 7 October to 6 November 2021, in Ramesh Mario Nithiyendran: The Guardians at Sullivan+Strumpf’s Zetland gallery.