Music, Ideas and LIGHT! Our Guide to Vivid Sydney

Vivid Sydney returns this year with a seminal celebration of light, ideas and music – with Australia’s Indigenous culture set to take centre stage. Since its inception, the festival has been a highlight of winter in Sydney, a time for communities come together to celebrate creativity and togetherness.

The 2021 program will showcase an incredible array of artists and thought-stimulating events including artist talks, music performances, and of course the amplification light over Sydney’s iconic architecture.

Here are our top picks from each section…

‘Sydney-based design studio Atelier Sisu works at the intersection of art and architecture creating large-scale site-specific works that enchant by reinventing places. For Ephemeral’s world premiere, they have scattered over 200 larger-than-life illuminated spheres across Cockle Bay, complete with a floating boardwalk, transforming Darling Harbour into a giant bubble bath. Euphoria truly is contagious. You’ll feel like you’re walking on water, buoyed up by joy, as you weave through Ephemeral.’ 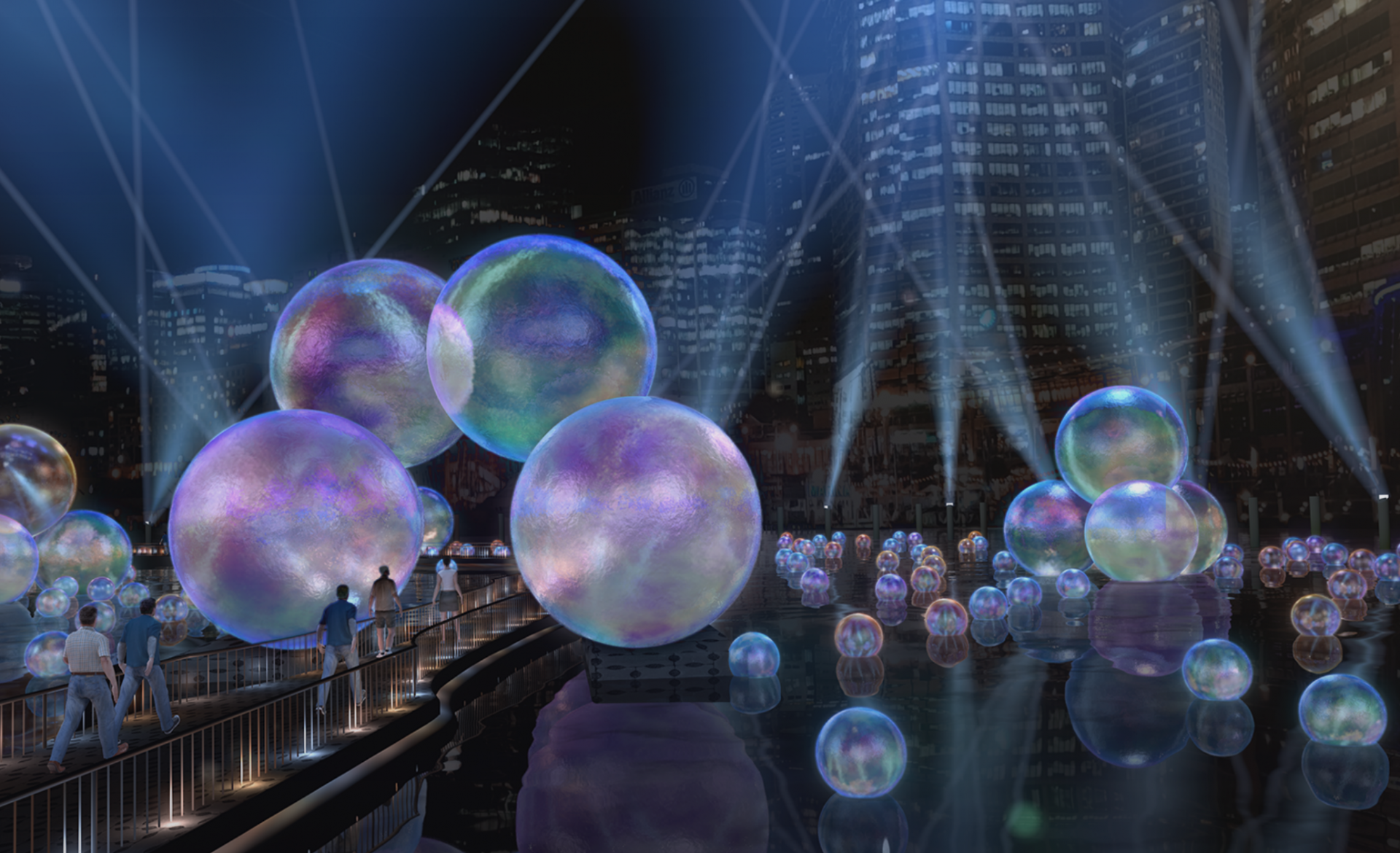 During the summer term of 2019-2020 UTS Design ran an elective subject to enable students to produce an artwork for exhibition at Vivid Sydney 2021. Students worked in teams to design, prototype, and fabricate an installation based around the mythical elements of the earth: fire, water, earth, and air. The project introduced students to the public art and sculpture industry, specifically in the light art space by providing them an opportunity to experiment with materials and technologies. Patterns in Nature forms part of a collective installation of sculptures at First Fleet Park.’ 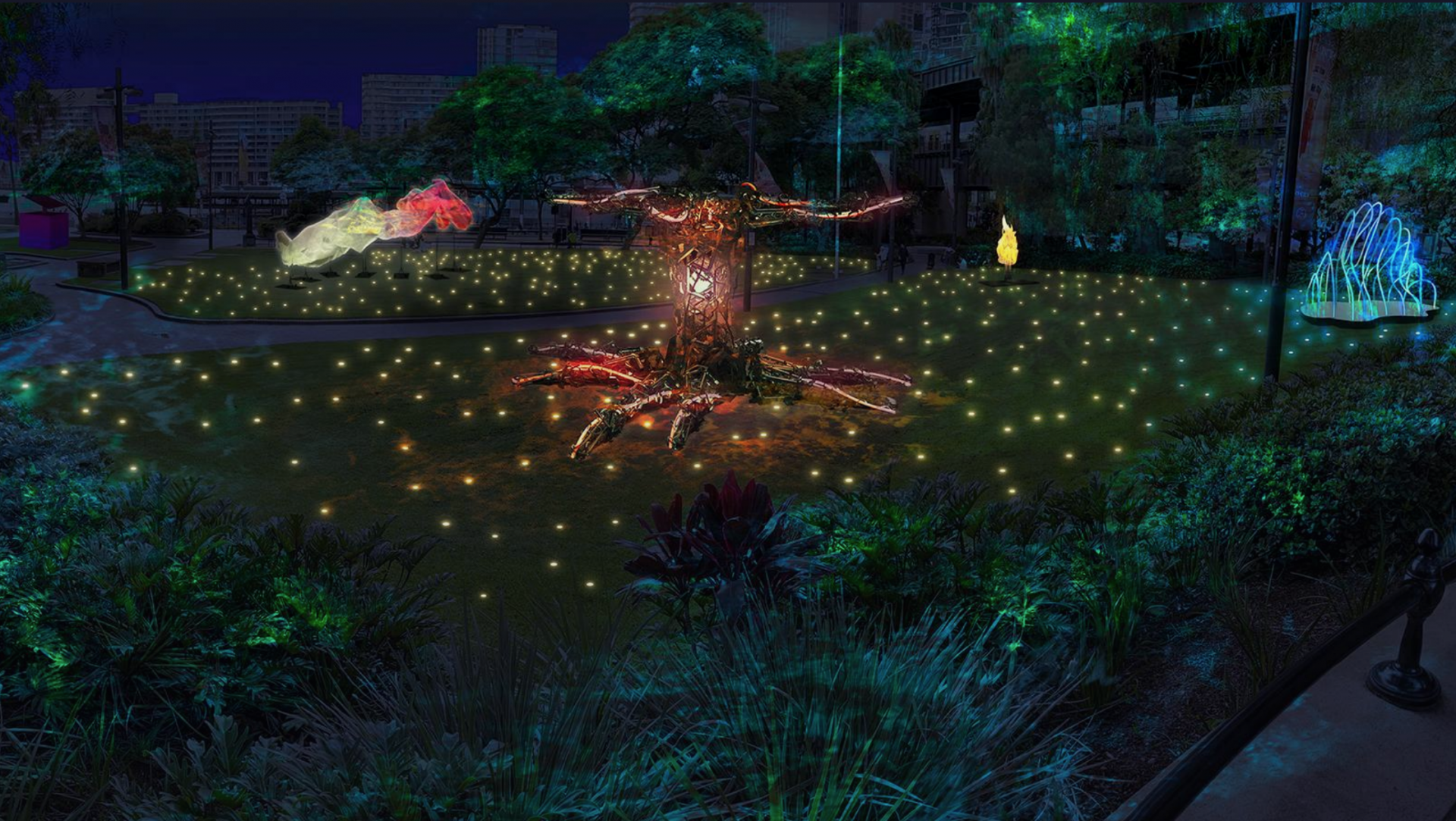 Created by Sydney-based experience designer Edison Chen and his team, Kin is a superscale sculpture in the form of a bust of a human figure, riven with cracks of light. Even though its head looks up to the sky, visitors will recognise an expression of contemplation.

Its silent statement, asks what it takes to recover from the bushfires and climate catastrophes, Covid19 and civil rights abuses of 2020 and how to prevent future occurrences. The Artist takes inspiration from the Japanese art of kintsugi, in which gold, silver or platinum is used to repair broken pottery. The Artist’s philosophy is to accept breakage as a beautiful part of life and to embrace life’s imperfections.

As golden light travels through the cracks, the brightness, hue and speed of subtle rhythmic patterns are determined by the nearby audio activity. These animations concentrate our awareness of self with our environment. Ultimately, Kin connects us through empathy, resilience and hope. 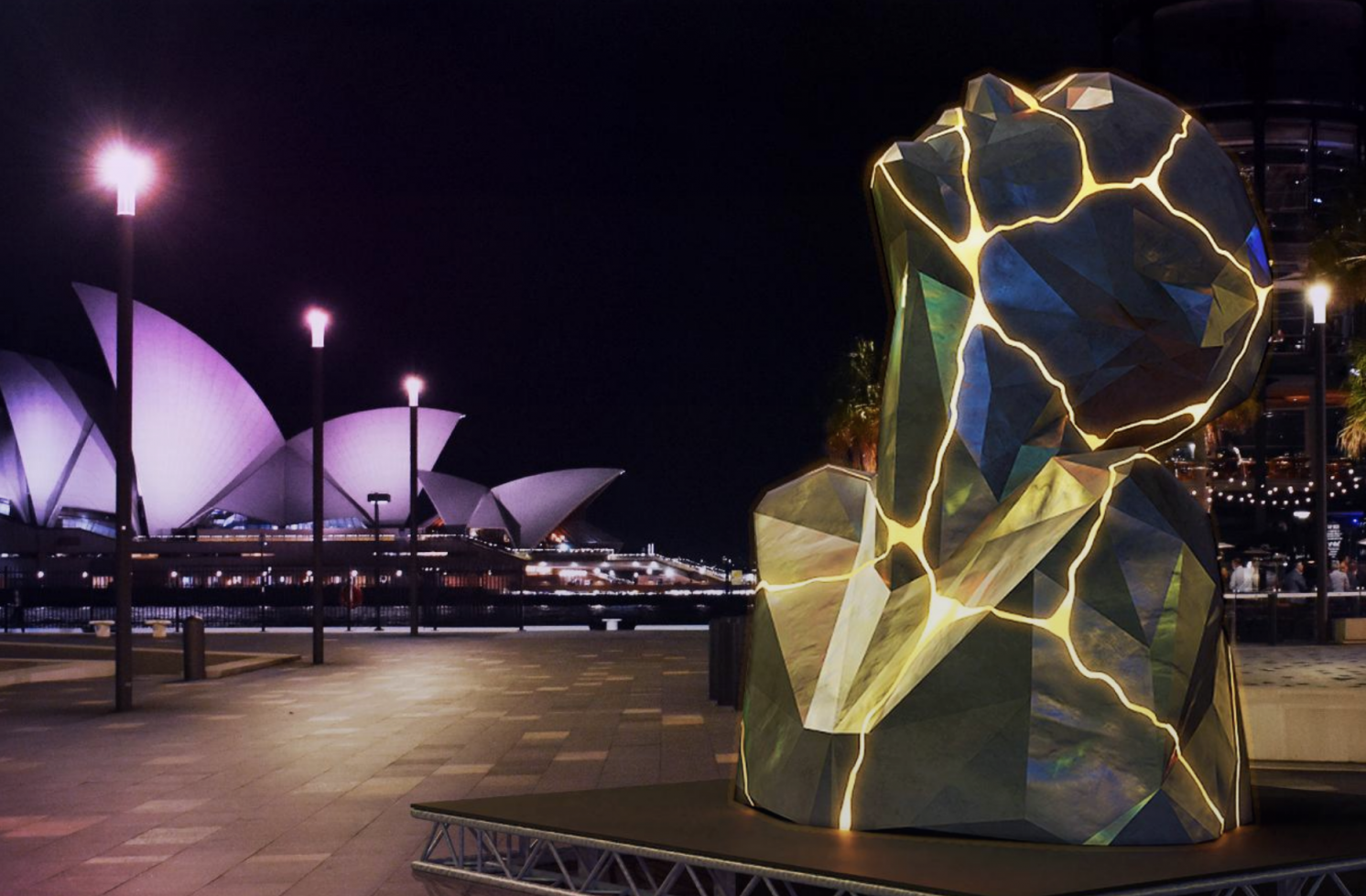 Capitalising on the success of his explosive house party at Vivid LIVE in 2019, Australia’s premier First Nations MC Briggs is back to rock the Sydney Opera House Studio with an entourage of special guests from the burgeoning local hip-hop scene.

A rapper, producer and media entrepreneur par excellence, Shepparton-born, Yorta Yorta man Adam Briggs first gained national notoriety on the Hilltop Hoods’ Golden Era label, releasing the vital albums The Blacklist and Sheplife, forming the hip-hop duo A.B. Original, and inaugurating Bad Apples, Australia’s first Indigenous-owned label. He’s won ARIA and J Awards, been named NAIDOC Artist of the Year, starred in the acclaimed ABC series Cleverman, and toured with his hero Ice Cube, all while bringing his rapid-fire rhymes and sense of justice to bear on the systemic racism of white Australia. All that, and he’s just getting started. 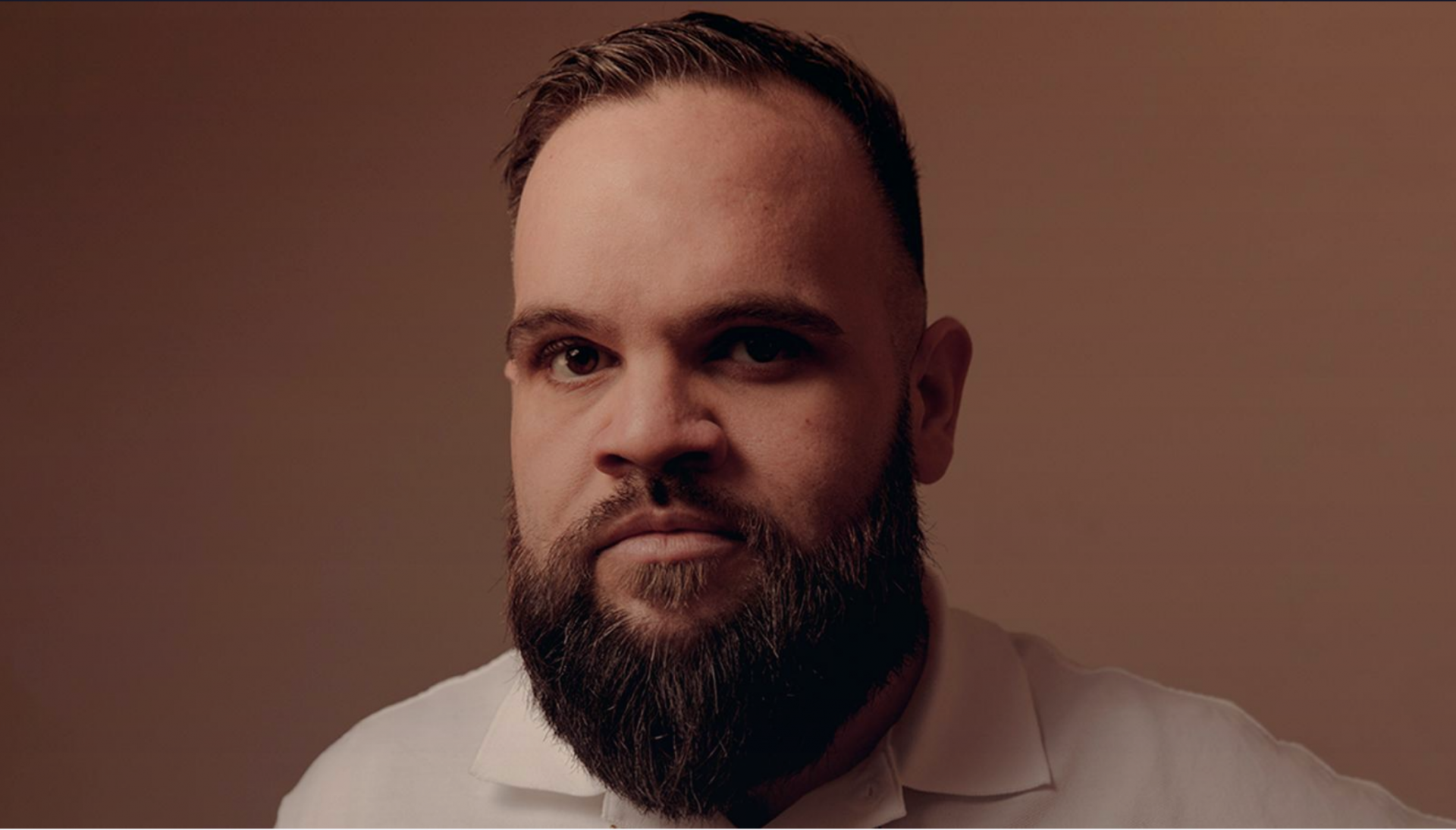 In just a few short years, Zambian-born singer, poet and visual artist Sampa The Great has become one of the world’s most vital performers, electrifying and empowering audiences with her eclectic blend of hip-hop, neo-soul, jazz and Afrobeat – music that speaks to a shared vision of a possible future, in dialogue with the cultural heritage and experiences of the Black Diaspora.

Marking her Joan Sutherland Theatre debut, Sampa’s ‘An Afro Future’ unites a host of artists for a huge night of music that both reckons with displacement and celebrates the culture of tomorrow. 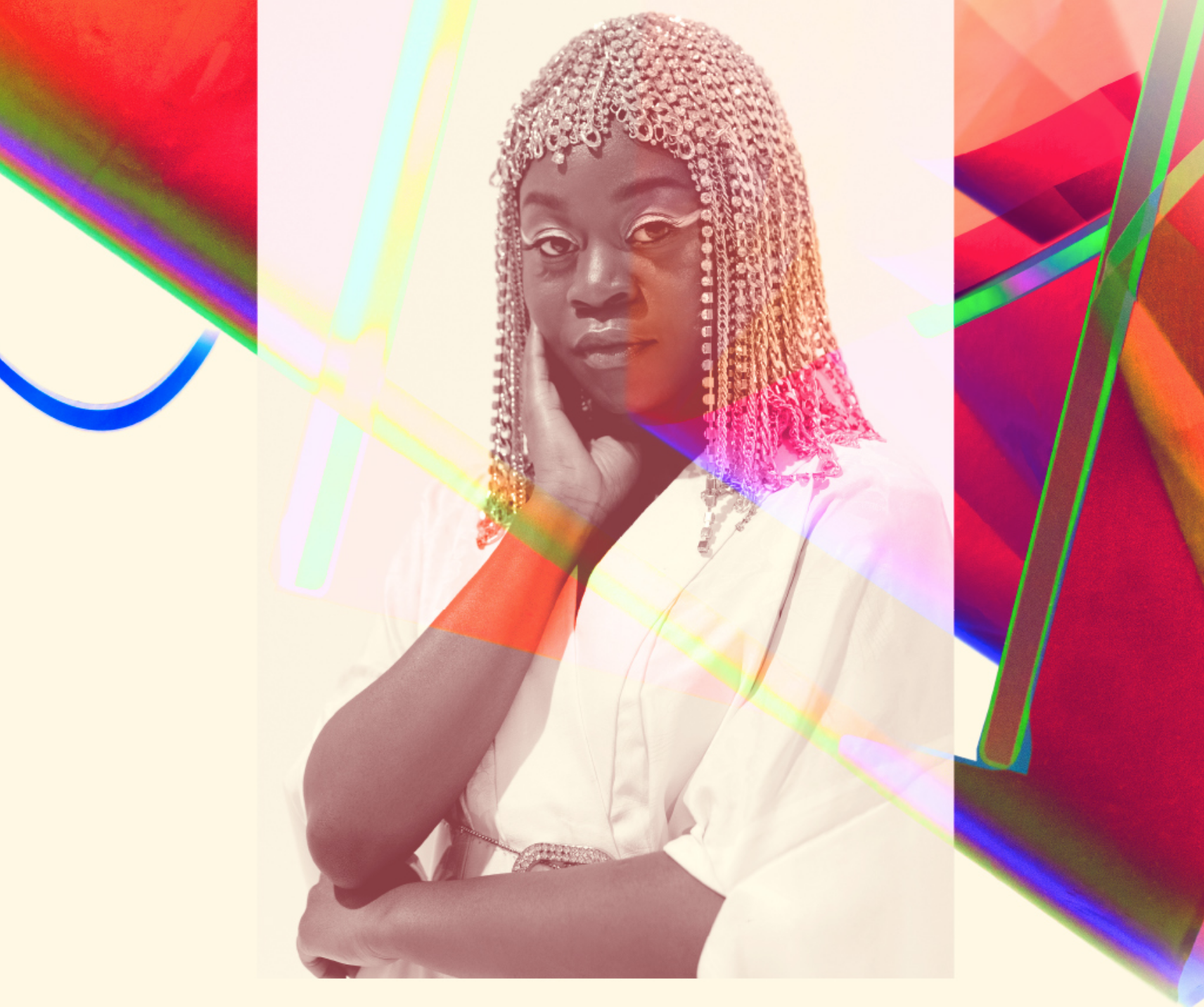 HTRK is a Naarm based duo with musicians Jonnine Standish and Nigel Yang. Formed in 2003, originally with a third member, Sean Stewart, the two now have a cult following for their emotionally charged sound – navigating universal themes of love, loss, desire, intimacy and fear. Jonnine and Nigel are set to return to the stage for Vivid Live on the Friday, 13th August, a show not to be missed. 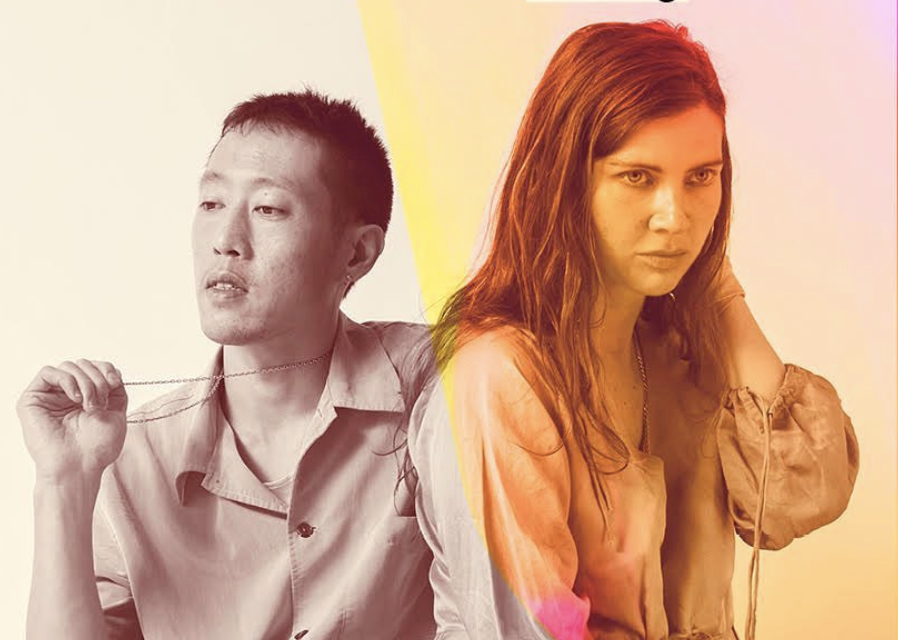 Jonnine and Nigel of HTRK

Following on from their bruising set for the Sydney Opera House Digital Season last year, Sydney’s cult post-punk heroes Low Life are back to make their very first in-person live appearance in the Studio for Vivid LIVE. Since their emergence from the local punk scene alongside Total Control, Royal Headache and the RIP Society label, the band’s signature stew of raw, punk energy and layered, wall-of-noise sound has seen them go from strength to strength, culminating in their acclaimed, Australian Music Prize-nominated album, Downer Edn.

On the eve of their hugely anticipated new album, From Squats to Lots: The Agony & XTC of Low Life, due in 2021, this is your chance to catch one of Sydney’s most cathartic punk bands in their blistering prime.

A rising star dubbed by Triple J as ‘one of the most exciting and powerful new rappers in Australian music’, Barkaa is a proud Malyangapa, Barkindji woman from Western New South Wales. Music has always been part of Barkaa’s journey to express herself as well as the truth and issues impacting First Nations people.

“It was a dream to get my song played at a protest, and they were blasting it through the streets,” she says. “I thought, ‘Wow, I’m giving back to a community that gave me so much as a young Aboriginal woman.’ Seeing that my voice could empower other people, that they were listening to what I was saying… that really lit the flame.”

According to GQ, “listening to Barkaa is not a passive experience. For some it’s rousing and authenticating; for others it’s potentially confronting, in a necessary check-your-privilege kind of way. She rips truths and reckons with centuries of oppression in the space of a single bar, like few have ever done before – not in Australia at least.” 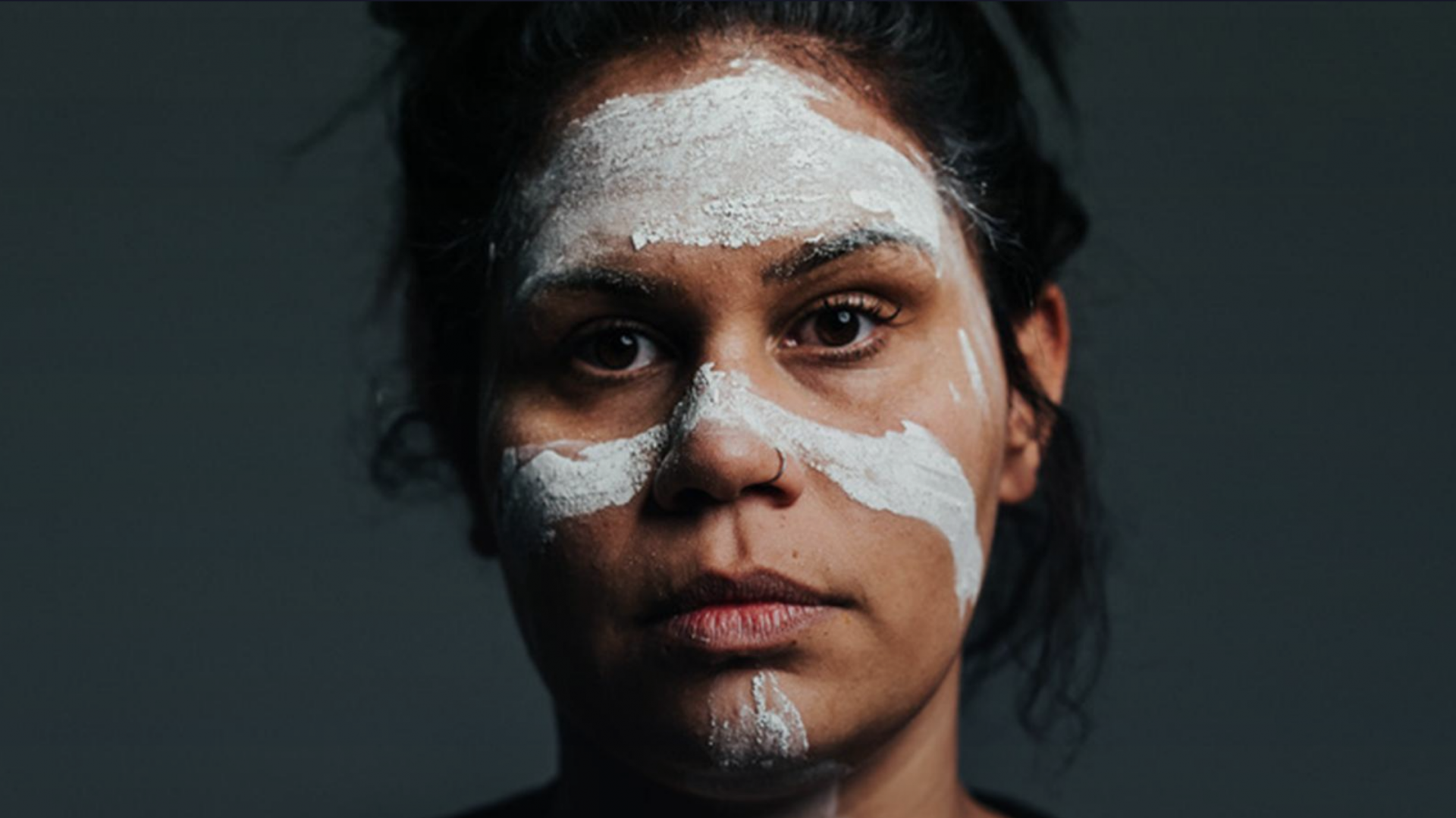 With his eccentric talent for mixing psychedelic pop, trippy funk, experimental glam and prog rock, New Zealand native Connan Mockasin has made a reputation as a singular performer – and his live act has drawn ecstatic raves and head-scratching puzzlement in seemingly equal doses.

A prodigious musician and singular producer, the New Zealand multi-instrumentalist broke out with his jazzy, soft rock inspired Forever Dolphin Love and its follow-up Caramel – concerning the tender, tragic relationship between a man and dolphin – before going on to collaborate with Charlotte Gainsbourg, Dev Hynes, MGMT and John Cale, form a glam-sleaze band with LA Priest, and tour with Radiohead. His third album Jassbusters (2018), for which he directed an accompanying five-part absurdist film, saw Mockasin roaming across country rock, soul and musical surrealism.

For an unforgettable Vivid LIVE debut, Connan will screen a never-seen-before episode of his TV  “melodrama” Bost’n ’n Dobs’n followed by an unplugged solo set.

FLOOD, FIRE, AND PLAGUE: CAN GREENER CITIES PROTECT US FROM DISASTER?

As one ‘unprecedented’ disaster after another strikes our communities, the struggle of managing this scary ‘new normal’ is becoming all too real.
If we accept that cities can’t protect us from natural disasters, can we use the forces of nature and change to make them work better? Or, does the solution lie in focusing more on health and resilience and less on maximising real estate value?

Join us to find out what this future city looks like and what would it take to create it. We’ll open with extracts from two short films Water and Fire (commissioned for the 2021 Venice Biennale) that explore the issues confronting our 21st century cities. You’ll then be presented with a number of future scenarios for Sydney in relation to heat, fire, sea level rise, floods and future pandemics.

Bring an open mind and let your imagination envisage the future of our city. 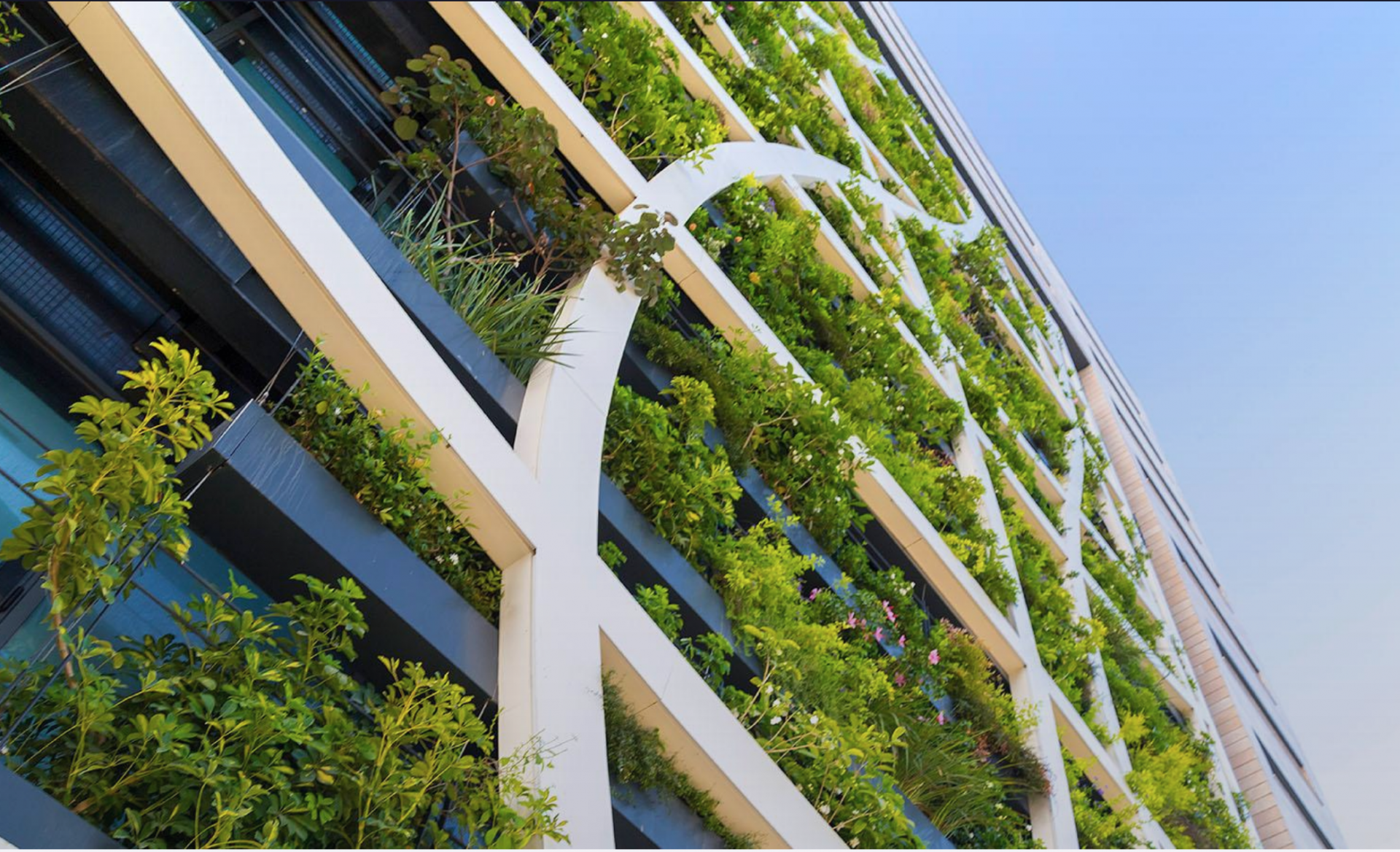 Flood, fire, plague: Can greener cities protect us from disaster?

In an age of mixed messages and ‘alternative facts’, investigative journalists play a leading role in sorting the truth from the lies. So how do journalists go about uncovering high-stakes lies and corruption? Often with the testimony of whistle-blowers. How can they both trust and protect their sources?

Join investigative journalist Caro Meldrum-Hanna from the ABC (Four Corners and Exposed: The Ghost Train Fire) and Ethicist Director Dr Simon Longstaff AO from The Ethics Centre to go behind the scenes of the stores to explore the craft and ethics of the investigative process.

Drawing on decades of journalistic experience, together they will unpack the lessons they learned from their successes, and the times they didn’t quite get it right. They’ll consider what Australia new media laws mean for the profession, democracy and truth telling.

This event is presented by Vivid Sydney in partnership with Parliament House and The Ethics Centre. 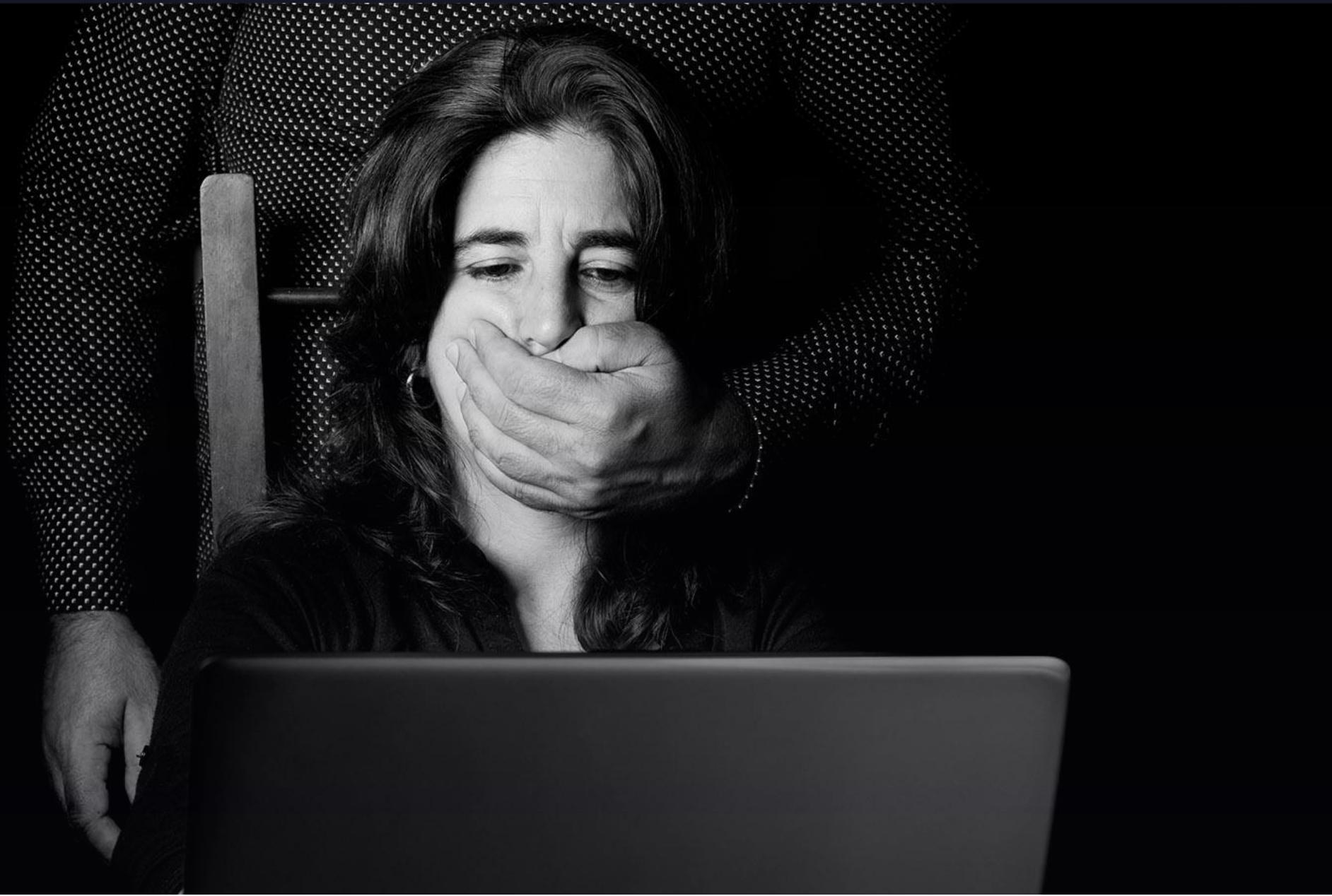 Disability arts has been called the final frontier of the avant garde. So, when artists with disability enter the realm of digital arts, expect the unexpected. Join a panel of local creatives as they explore the impact of inclusive filmmaking in a digital space, how artists with disability can share their stories through these mediums, and how inclusive filmmaking can draw in more ideas and more artists.

Together we’ll explore digital arts through our collaboration Arts Screen and talk with artists with disability using digital arts to share and connect through creative inclusive practice. 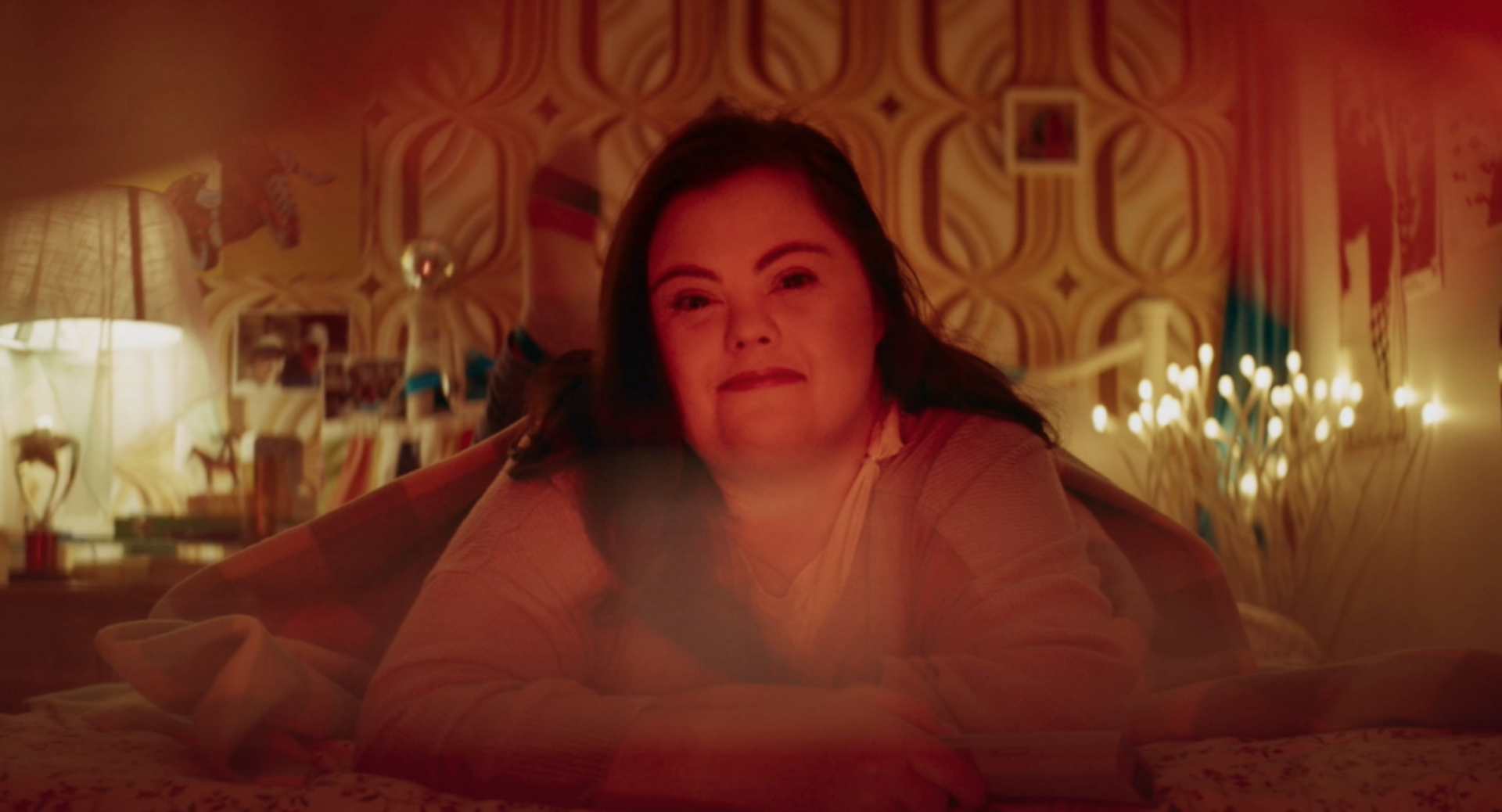 Cults. They bring to mind master manipulators Jim Jones, Anne Hamilton Byrne and Charles Manson. Mass suicide, child abduction, routine drug experimentation and even murder. But beyond the sensational headlines, thousands of cults avoid the spotlight in countries around the world.

Join writer, filmmaker and podcaster Sarah Steel as she unveils the seductive power of sects and the coercive world of cults. Sarah’s award-winning podcast Let’s Talk About Sects provides an outlet for those who have been involved in cults and had untold difficulty liberating themselves from entrapment. Sarah has spoken to ex-members of David Koresh’s Branch Davidians, Anne Hamilton Byrne’s The Family and others to reveal why people are attracted to charismatic and controlling leaders, and how you might be more susceptible to cult-like thinking than you realise.

After sharing her insights, Sarah speaks with a panel of women who have direct experience in cultic groups including: 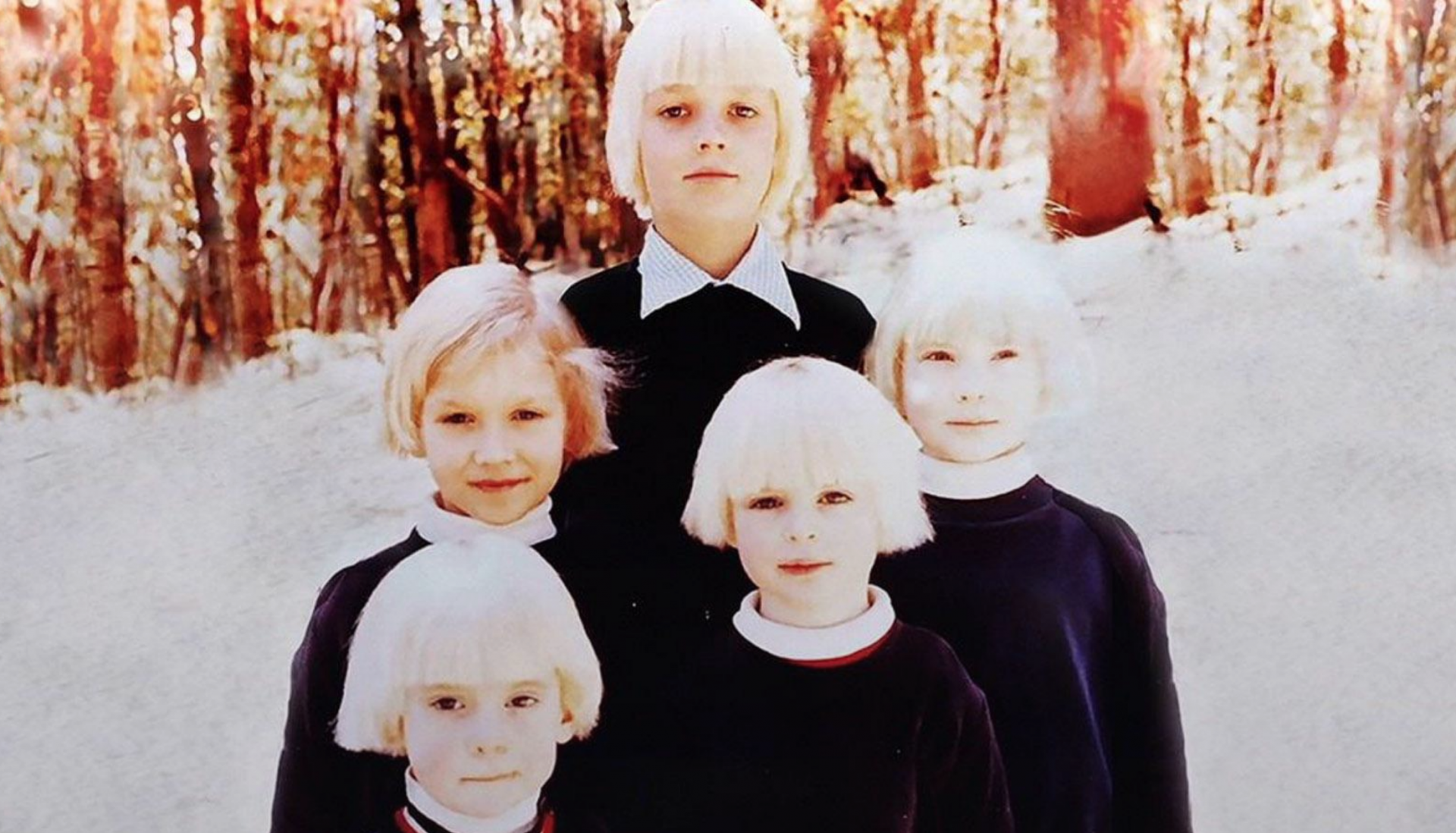 “The installations and projections have been produced by 129 light artists from 19 countries and many will offer an immersive and interactive experience through voice and motion controls,” Tourism Minister Stuart Ayres said.

We hope to see you there!

*This text originated on Vividsydney.com.au