STANISLAVA PINCHUK: TERRA DATA AND THE LAND AS WITNESS

Stanislava Pinchuk’s first career survey at Heide Museum of Modern Art reflects on a body of work exploring the role of land as witness. With a practice spanning sculpture, drawing and data mapping, Pinchuk’s 40 works from 2015 to 2020 appeal to notions of beauty and balance as a conduit to deeper explorations of war, conflict zones and collective cultural suffering. Stanislava spoke to us about her evolving sense of personal and creative identity, and how her work considers the poetic and emotional resonance of data. 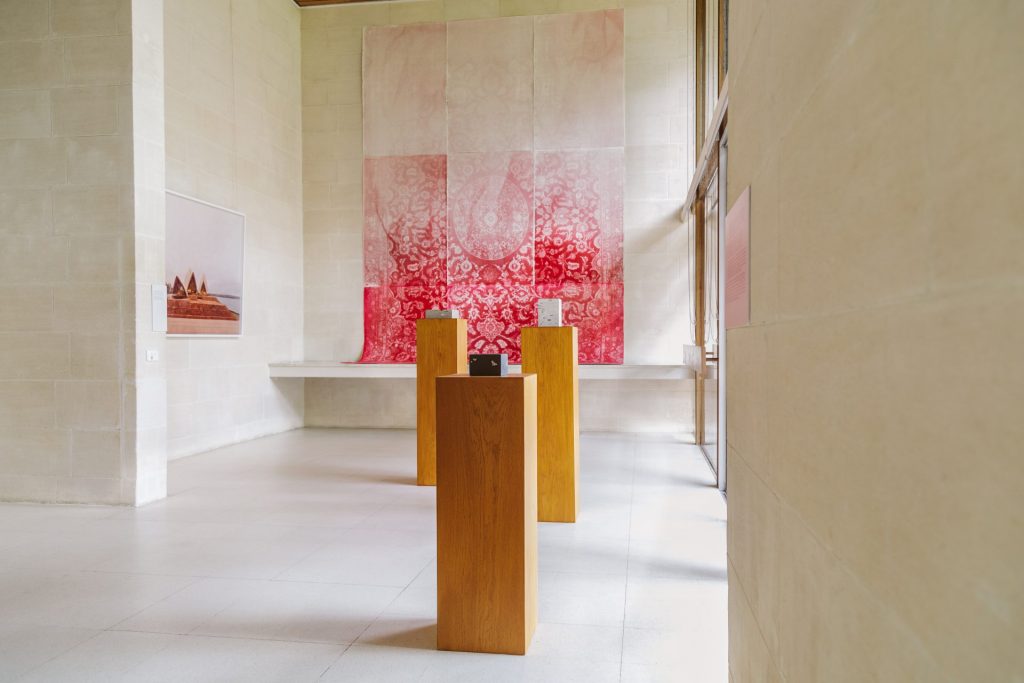 How would you explain data mapping as it exists in in Terra Data to someone who has never encountered it before?

Often we think ground is something quite neutral beneath us. I think a lot of people take it for granted that ground in not really emotive. But the ground holds witness to what happened on it. Ground also carries a tremendous memory; whether it’s in phosphates in the soil, or radioactivity, or a bomb crater. Land has this huge capacity to hold a much bigger story. So I think my practice is a way of surveying that emotional element.

The first data mapping works I made were really instinctive because Ukraine had been invaded and I felt angry and dislodged as a human being. They were really intuitive, and they existed in their own whirlwind. Only when I finished them did I realise I had a bigger idea, an avenue of research that people weren’t engaging with in the same way.

I’d always been interested in tech and data, but it was never the basis of my practice. So it was all a real crash course in fieldwork with great limitations. Each body of work was mapped totally differently. I’ve explored different mediums for different ideas. 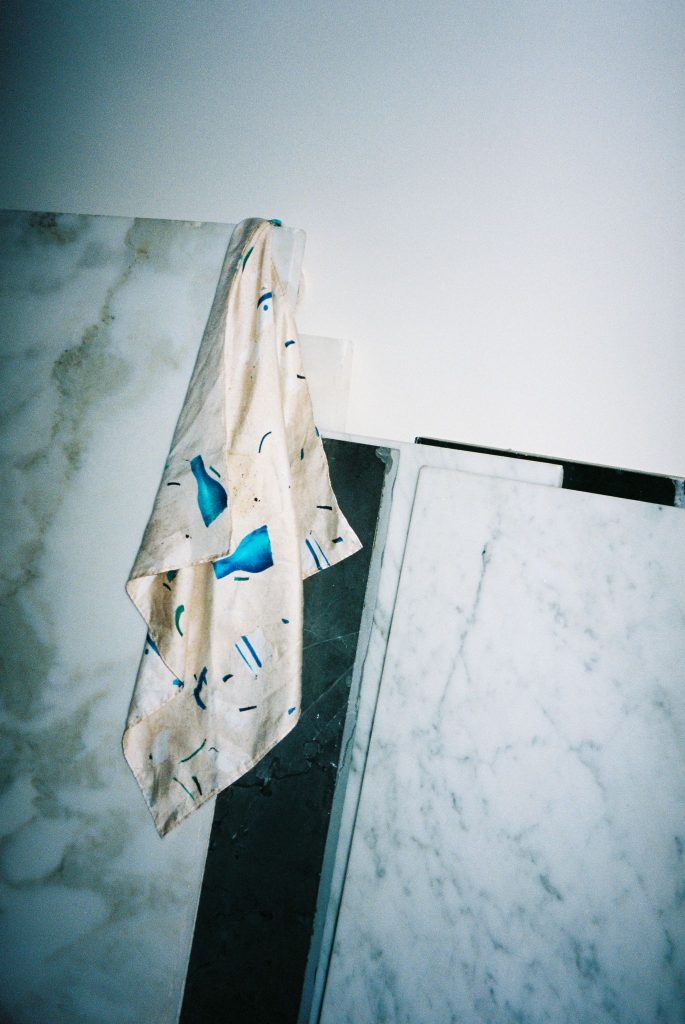 Terra Data encompasses your series’ Sarcophagus (2017) and Borders (2018), featuring works created from tiny pinpricks on paper. How long does it take to produce one of these intricate works?

Honestly, I have no idea. Obviously, there’s research, the field work and the 3D mapping, so the actual execution takes a while, but I didn’t know because it’s quite stop and start. Physically it’s also really painful. When I was a bit younger I could kind of do full day stretches, but I can’t do that anymore.

I find this type of work really meditative, so I’m not really counting the hours that go into each piece. If a work takes 5000 hours to create, that doesn’t necessarily mean it’s a good artwork. It just means you wasted 5000 hours. I really love works that you can feel the person lived with, maybe ate their dinner around. Works that you can see a process of thinking and revisiting. I feel like Guernica has that energy. You can tell Picasso lived around that work as he was resolving it. 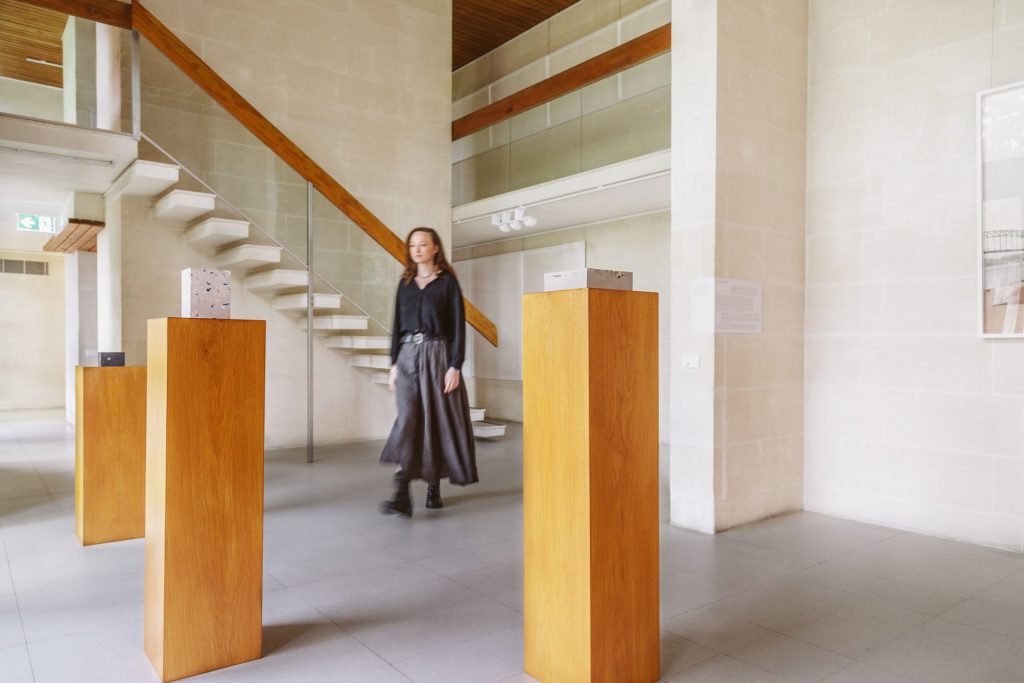 Borders (2018) explores the changing topographies of the Calais region in France, and the forced evacuation of the refugee camp on the land there. Canyou share some insights into why Calais became a major field of inquiry for you?

Calais was a migrant camp in the northernmost point of France. Geographically, it the closest point between England and France. When the Eurostar tunnel was being built it became more difficult for migrants to cross the border, so people just stayed in Calais as a camp. At its peak in 2018 there was up to 10,000 people living there. It evolved into this informal city with civic structures like a kindergarten, bath houses, bakeries and churches. Some people decided to give up on going to England altogether, staying there to run businesses.

Calais was forcibly evacuated in 2018 with the influx of many Syrians. The ground was burnt. It was almost like this pagan raising, a cleansing that was symbolically horrible. It was something the French government didn’t need to do.  This made me think a lot about the imprint of migration on the land. When does migration plot a physical evidence of itself in the land?

So Borders represent five micro topographies, including things like trampled kiosks, prayer mats, tents and shot gun shells. Calais is also the lace-making capital of France, famous for its handmade lace borders. This also reflects a consideration of its political borders too. Lace, longing, luxury, desire and distance

How does your work across different mediums challenge gender dynamics as they relate to the interior and the exterior realms, or any other tensions at play?

I guess surveyors, architects, topographers, and people who physically lay a stake on the land tend to be male. On the other hand, lace-making, rugs, and other decorative elements are usually associated with the interior, the female realm. This is a contrast I have explored in my work.

While my work is situated in the realm of surveying data, it’s also about care and tenderness. It always comes back to evidence. It’s kind of like a journalistic practice. Art has offered me this really welcoming umbrella where I can explore these propositions for thinking and consider these dynamics across gender, data, and emotion.

Can you describe your emotional response to seeing these works exhibited in Terra Data after a turbulent pandemic year?

COVID-19 was a big crisis of confidence for many of us. For a year you’re without the energy, feedback and inspiration from other people. You lose that rootedness in reality. I think it’s all come at a strange time when you’re not sure who you are, or what any of it means. Maybe it all hasn’t really sunk in for me yet.

Why did you choose to work with terrazzo in Borders (2018), and how did this medium further express the essence your evidence-based practice?

Terrazzo is a really beautiful medium because its resourceful; it’s your scraps and your bits of stone, which is what the camp in Calais was.  I never interfere with the ground when I work, but for these blocks I took the last 20 kilos of the camp. It was snowing at the time, so I dug through for the first few days and got the last 20 kilos in bags. It plays into that idea of witnessing. All the objects in the ground were evidence of what had occurred there., they don’t lie.

Terrazzo can be synonymous with a level of polished luxury, but it was originally the poor people’s medium because it was mixed from scraps. You set it because you can’t afford tiles or mosaics. These pieces were all kind of happy surprises in regard to what set and what worked. Once you pour terrazzo you can’t get it back, so you never really know what the outcome will be. 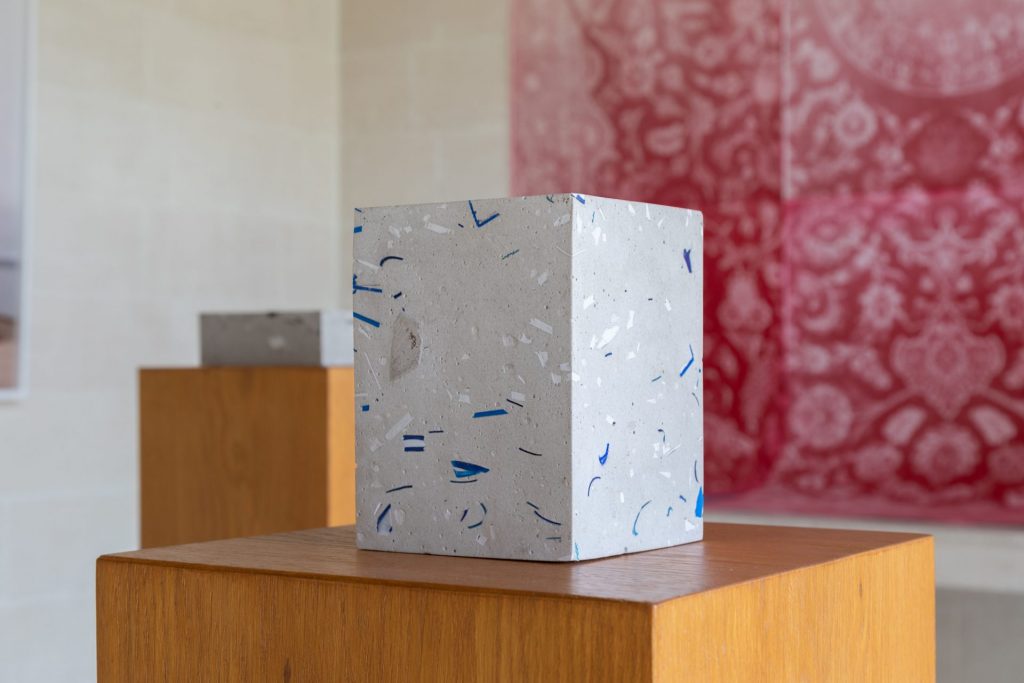 In 2020 the Sydney Opera House commissioned The Red Carpet, an architectural intervention that acknowledges the history of women’s arts and handwork. Can you reflect on the symbology of the Ukrainian Bessarabian rug featured in this work, and what it means to you personally?

It wasn’t until I was doing a talk about the work at the Opera House that I realised I grew up with two things tacked on my wall: a map of the world, and a carpet. There are my two obsessions right there. We had this similar Persian Bessarabian rug which was like a maze for me. I’d follow my finger through the rug’s design and try and get out of the maze without hitting a decorative element. That was my obsession.

These Bessarabian rugs made in the Ukraine are really symbolic of what Ukrainians are. We’ve never been a great empire because we’ve always been a football between other empires. Hence the pain, and why we have a war. It just feels like this weird doomed tragedy. These rugs evoke the fact that Ukrainians are originally Iranians, and so there’s always been a lot of influence from that region. But we also have Romani, Slavic and Jewish influence, and there’s also a lot of French floral and courtly references in these rugs too. There’s this really interesting mix of motifs, which is a great proxy for what makes Ukrainians who they are. I certainly feel these rugs are a great conduit for who I am.

How did the opportunity arise for you to have your own survey show at Heide MoMA?

I did a talk here about 2 years ago for a friend’s magazine I had written an article for, but I didn’t meet any of the curators at the time or contemplate having my own show. I was coming back from Sarajevo for the Opera House project and I got a totally cold call out of the blue from Heide’s Artistic Director Lesley Harding, asking if I wanted a survey show. That never happens really. It was pretty wild!

How do think viewers will experience Terra Data, regardless of whether they are familiar with your practice or not?

I try not to dictate how the work is seen too much. There are beautiful and very emotional responses I can’t guide people to.  That’s the wonderful thing about art, that gap between the maker and the viewer. I always hope that people can find a sense of reflection in my work and solace in the kind of beauty. I think beauty is a really important tool to a bigger stick, a way to lead someone towards exploring more challenging themes.

How did you come to collaborate with The Social Studio on this collection of beautiful terrazzo-printed silk scarves?

They approached me a while ago when they had a fundraiser asking artists to submit designs for a scarf collection. I gave them an image and we worked together in refining it.  I feel like it was the right context for my Calais work to have an impact, it all felt very well-aligned.

They’re just a great place in the neighborhood that really do practical, impactful work to support people with backgrounds like mine. I wish when I came to Australia that I had a place like that. It would’ve made my life really different.

Does your work with fashion clients ever inform your personal practice? If so, in what ways?

I’m really careful about separating my client work from my own practice. I’m extremely protective of my personal work, it exists in its own realm. However, I do get a lot of inspiration from fashion and architecture, I always have. For example, the visual tension and the flow of my Sarcophagus series was really inspired by a Valentino couture collection. A lot of the netted forms in my work have been inspired by my friend Dion Lee, who I spoke a lot with about the shape and movement of netting and its dynamics. The Red Carpet commission also took reference from a few Givenchy couture looks. I do find a huge amount of inspiration in the forms and textures from fashion and architecture in my work. 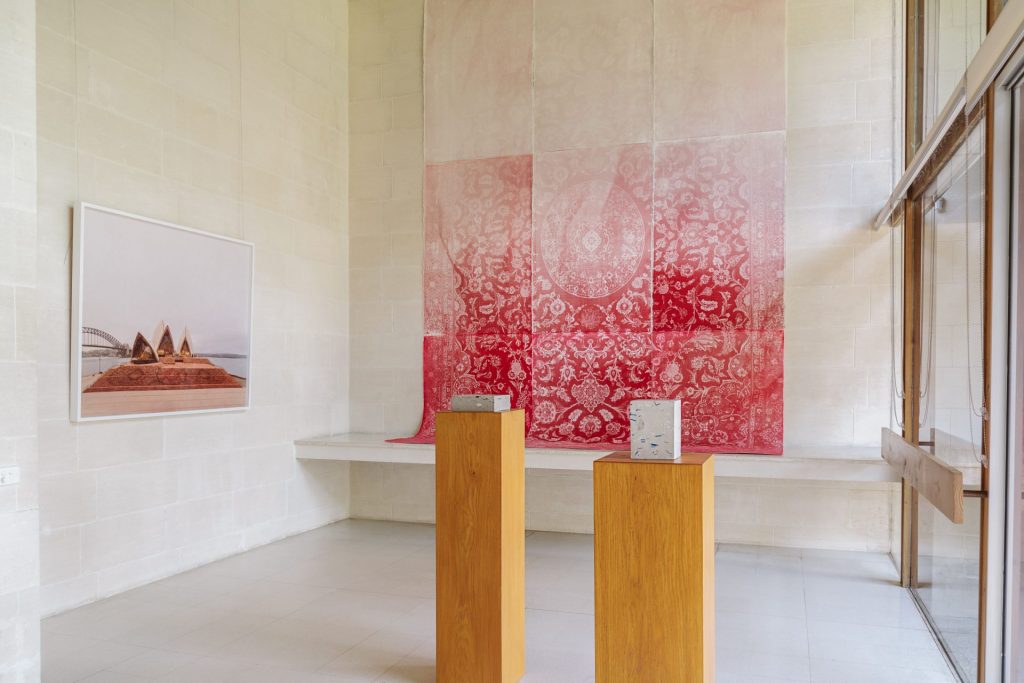 Why is the idea of balance so important in your practice, both visually and thematically?

I see myself as equal parts visceral and cerebral. I’m very logical and evidence-driven, but I’m also very much about emotion, about repercussions. I’m interested in the poetics of the data and the emotional input of the data. I think there’s a resonance about what I do.

My big thing for this show was 50/50. I wanted the house (Heide Modern) and the work to be really harmonious. I didn’t want one to overshadow the other because the works are so subtle. I was really careful about finding that balance.

Hopefully it comes across as a love letter to the house. For me it’s about retrospection, place, nature, and land. 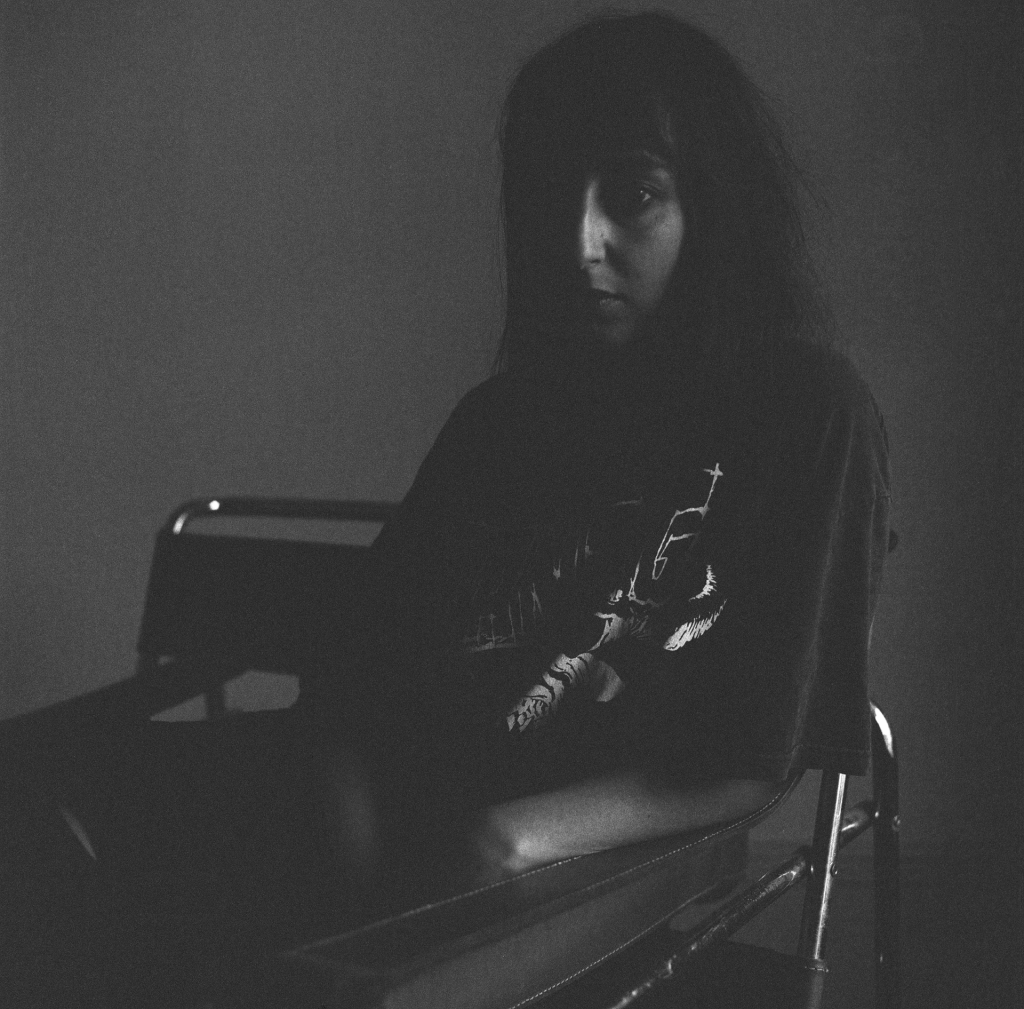 Terra Data is now showing at Heide Museum of Modern Art until 20 June 2021.