Reimagining the past and the rebirth of the corset in contemporary fashion.

Reimaging the past is nothing new to contemporary fashion. John Galliano for Dior, Vivienne Westwood and Jean Paul Gaultier all produced seasons in the 90s and early 2000s that theatrically reinterpreted fashion trends and art from 17th century Europe.

Louis Vuitton partnered with Jeff Koons releasing a range of handbags and accessories plastered with romantic reproductions of iconic paintings. The Koons capsule was complimented by the FW18 ready to wear collection, which saw models draped in embroidered bolero jackets which could have been pinched from French aristocrats’ closets.

However, the past year has seen small brands and graduate designers turn this nostalgic fad on its head. Designers such as Dilara Findikoglu, Vanessa Bon, Rhi Dancey and Melbourne designer, Karla Laidlaw, conflate traditional and classical motifs with unique and contemporary materials and silhouettes.

This synthesis of old and new, past and present shows a growing attentiveness towards specific windows of history, sweeping many countercultures across the globe, as young people become more engaged with the past and look to reinterpret and understand it through new perspectives.

Tweed skirts and jackets were exhibited beside tightly laced corsets permeated by references of Victorian-erafashion in Dilara Findikolgu’s AW20 collection. The transhistorical staples were modernised with exposed skin and monotone colour pallets and were tastefully risqué.

Utilising a Victorian bodice from her own personal archive, Findikolgu created her ‘Money Corset’ from a scan of the 150-year old garment, integrating her physical inspirations from the past in a digital medium.

Despite obvious linkage to Victorian fashion through her distressed corsets and inserts of classical fabrics, Karla Laidlaw has reimagined the past with a completely different perspective. Where Findikolgu retains the romantic mood synonymous with the early-modern period, Laidlaw strips away this enduring stereotype, reinventing past silhouettes and patterns to create new stances and meanings.

Most notable in Laidlaw’s subversions is her manipulation of the traditional corset. The garment is stripped down to its very foundations. Some pieces subvert the traditional function of the corset entirely, hanging loosely off the model’s body as if it is a light camisole, whereas others retain the structured aesthetic popular in the past. The corset is reimagined in a range of different contemporary materials, incorporating lurid Fluro greens and bold gothic lettering.

Laidlaw explores new functions and stylistic variations. Following the explosive success of her velvet ‘Spider Pants’ and bleached denim pieces, Laidlaw won’t let her design ability be Pidgeon-holed either. Through second lockdown she went on to use experimental textile methods of felting and replacing her previous corset shape in soft-form wool knitwear.

Although, the eclectic reinvention of the corset is not a phenomenon exclusive to Laidlaw. Many young designers have embraced the corset as the trend becomes a popular staple in many wardrobes. Brands such as Clio Peppiatt and Kepler London experiment with interesting cuts, raw edge hems and eclectic patterns in their reinterpretation. Designer Rosie Evans, All is a Gentle Spring, The Label Rae and Pink Moon Label deal exclusively in corsets, generating mass followings for their stand-out garments.

The reinvented corset is not always positively received, long associated with female oppression and body deformation. The conscious revival of a controversial garment, however, is not indicative of a reversion to outdated beauty standards, but an empowered movement reclaiming and reinterpreting femininity (is this too gendered should we say femme presenting?). It celebrates female autonomy and self-determination, rejecting contemporary notions that certain clothes are regressive symbols of conformity. 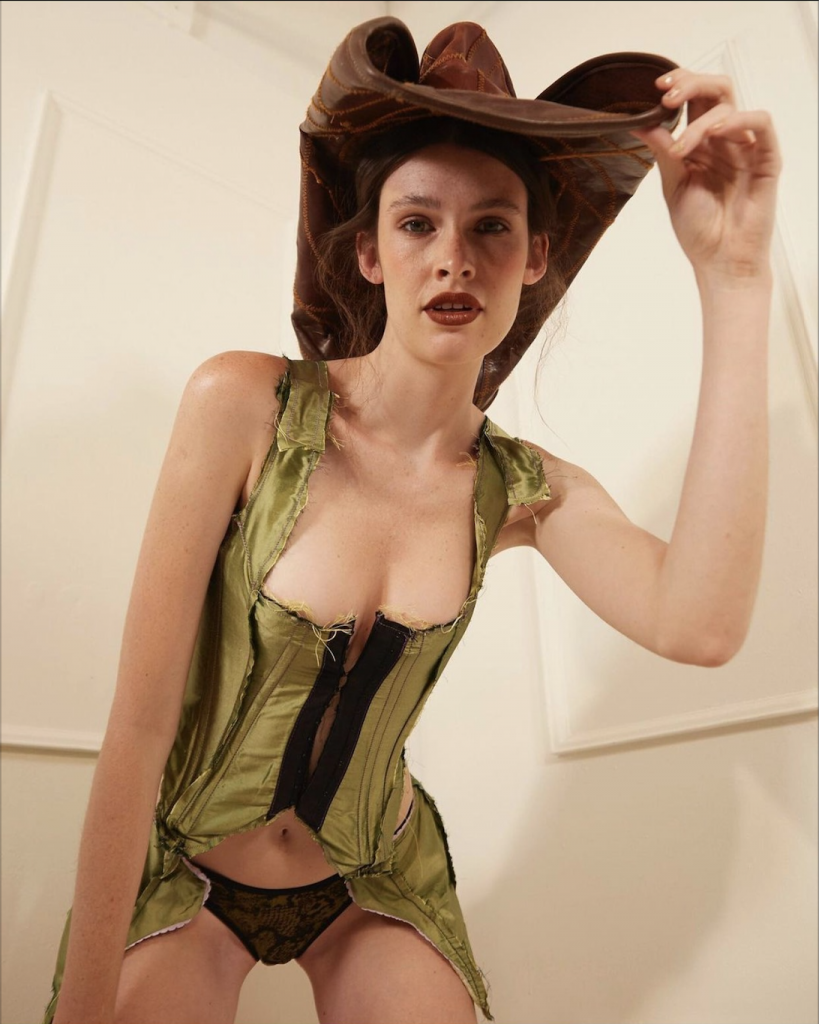